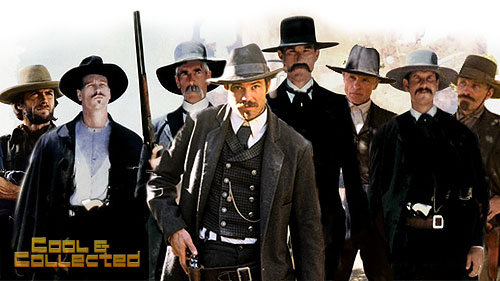 I alluded to this back in the “Expendables” post I wrote for the League a while back, but I just can’t help it, I love a good Western.

So, the crossover I’d love to see would have to begin with the Earp brothers, Wyatt, Virgil, and Morgan, and of course Doc Holliday–one of the greatest Western characters ever to hit the big screen (“I’m your huckleberry”). The Earps have become fairly wealthy by running their own Faro game out of the town’s largest saloon, owned by Al Swearengen.

For some reason, Ben Wade’s train ended up in Tombstone rather than Yuma, and soon after connecting with some old friends, he is up to his old tricks.

Seth Bullock, the new sheriff of Tombstone, rounds up a posse to take down Wade’s gang. Luckily for him, Virgil Cole and Everett Hitch arrived in town not too long ago, looking for work. The Earp brothers and Doc join them, and on their way out of town, they make one last stop at a cabin in the middle of the prairie, to see if an aged Josey Wales is up for one more ride.

This is the latest post in response to the weekly blog challenge presented by the League of Extraordinary Bloggers. This week’s topic asked what pop culture heroes or stories would make for the ultimate crossover.