This week, the League has asked what movie makes you cry like a little girl. Well, if you asked me that question ten years ago, my response would have been {snort} “nothin’. pfft,” but all that bravado went away seven years ago. You see, seven years ago, I became a father. They don’t tell you this in school, but when you become a dad, whatever emotional dikes you might have built up inside you are laid to waste, and all those feelings you had bottled up come bursting through in a rush. To this day, I am convinced that the nurse injected me with an additional X chromosome while I was holding my son for the first time.

The day my son was born may have the first time I had cried since scraping my knee as a kid, but believe me, once that door was opened, there was no closing it again. Now I get choked up at little things that I would have mocked in my younger years. If there is a movie that features a father and his kids, or a husband and his wife, and one is in peril, I physically can’t watch it. I stopped watching shows like ER due to the fact that every other episode had a sick child dying. No more, not for me, no way, I’m out. 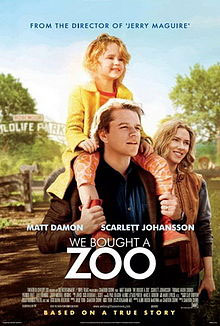 Last weekend, I was looking through the On-Demand listing for a something that would be a fun “Date Night” movie and We Bought a Zoo looked promising. The trailer was upbeat and the music was good. Cameron Crowe directed it? I loved Jerry Maguire and Almost Famous. Sold. Fire it up.

I’d like to go on record as stating that this is the most falsely-advertised movie i have ever seen. This movie wrecked me! Don’t get me wrong, it was an enjoyable movie and it did have an uplifting ending, but man.

If you haven’t seen it, I’m going to spoil it here, so you can stop reading and just think of me as a crying sissy.

The premise of the movie is that the wife of Matt Damon’s character passed away 6-months ago after an illness of some sort. Right there it’s tragic enough, but there are also two kids involved, a 14-year-old boy and an impossibly cute little girl. So, the whole family is struggling with the loss of their wife and mother. There is a scene where Matt Damon is clicking through iPhoto on his Mac laptop–he has an album of his favorite photos of his wife–and I lost it right there with him. Oh, it hurts. I’m losing it again right now.

Hoo. Okay, that was rough, but in addition to the loss of his wife, Matt Damon’s character is having trouble connecting with his son, who is struggling with his own grief, and just wants to be loved and held like his little sister. Like I said earlier, if a movie has a touching scene between a father and his son, I am done. Remember Field of Dreams’ “Dad, you want to have a catch?” or when Rudy’s dad learned that his son made it into Notre Dame? Here is the redemptive scene in the movie that made me a fan…

The movie ends with another emotionally-charged scene in a coffee shop, where the father reenacts the first moment he met the kid’s mother years ago. Crud, there I go again.

We Bought a Zoo ruined me for the rest of the weekend but I am grateful for watching it. Unfortunately, this isn’t the only movie that gets me choked up. I’ve got it pretty bad–some other movies that recently got me reaching for the Kleenex: Saving Private Ryan, The Road, Red Dawn, The Pursuit of Happyness, Up, Toy Story 3, and don’t even get me started on Marley & Me.

This is the latest post in response to the weekly blog challenge presented by the League of Extraordinary Bloggers. I’m not the only one sitting in a dusty room, here are a few others: TL, Jaime, Eric, and Jason.