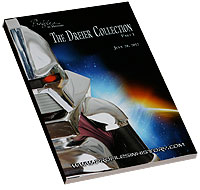 The latest Profiles in History auction catalog arrived in my mailbox and I knew from its imposing cover design that it was going to hold some amazing treasures.

The first page spread showcases an $80,000 model of the Nautilus submarine from 20,000 Leagues Under the Sea, and the last page is filled with rare General Mills monster cereal boxes and packaging. There are over 200 more pages of unbelievable pop culture memorabilia and movie props.

This auction is just the first part of the Dreier Collection which was put together by former Ryland Homes CEO, Chad Dreier, and his son Doug. The collection is one of the greatest pop culture collections ever amassed and an episode in the latest season of Hollywood Treasure featured some of the collection.

While flipping through the catalog, I started to imagine what I would buy if I was handed a blank check. It seems like a simple question, but when there are so many amazingly expensive items to choose from, how do you decide? Sure, the Cylon costume from Battlestar Galactica would look amazing in the cave, but one area that I always wanted to collect was original pop culture art that was used for comic and pulp covers, and movie posters. There are some great examples of in this catalog, so here’s where my blank check would be spent…

ORIGINAL BOB LARKIN COVER ARTWORK FOR THE BATTLESTAR GALACTICA COMIC BOOK. This original acrylic on board painting features an exciting battle scene between the Colonial Vipers of the Battlestar Galactica versus a fleet of Cylon Raiders and a Cylon Basestar. It was commissioned as a double wraparound cover for the Marvel Super Special Battlestar Galactica comic book, Vol. 1, No. 8, 1978. Measures 30 in. x 20 in., and is signed “Bob Larkin ‘78” at the lower left. 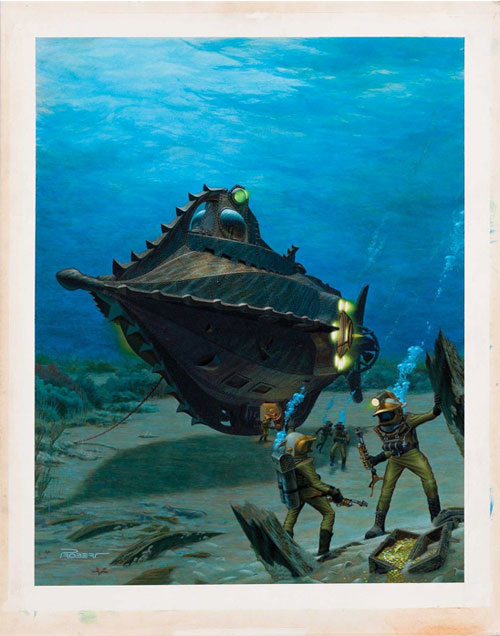 ORIGINAL COVER ARTWORK FOR 20,000 LEAGUES UNDER THE SEA CINEFANTASTIQUE MAGAZINE – Original cover painting for Cinefantastique magazine, Volume 14, issue number 3 of May, 1984. Accomplished with acrylic on artist board, this full-color painting by Andrew Probert features armed deep-sea divers exiting from and exploring around the large, central Nautilus submarine from 20,000 Leagues Under the Sea. 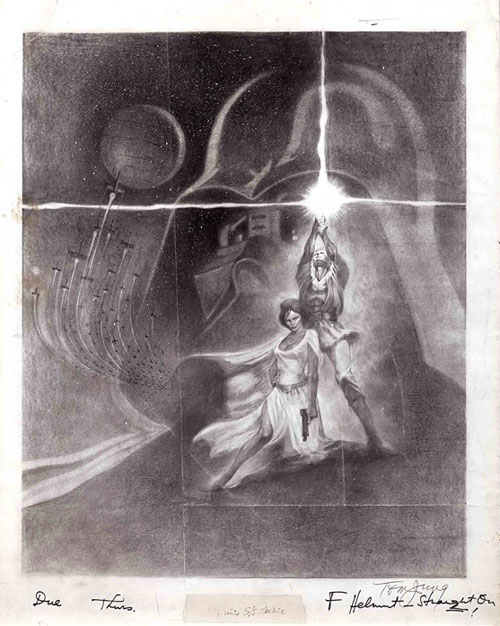 ORIGINAL TOM JUNG FINAL CONCEPT DRAWING FOR STAR WARS: EPISODE IV – A NEW HOPE STYLE A ONE-SHEET POSTER.  Final finished conceptual drawing in pencil, 18 ½ in. x 24 in., by Tom Jung for the creation of the Star Wars “Style A” poster – considered the most famous of all the Star Wars posters. This is a revised version of the original drawing (a copy of which is included on foam board), which shows a provocative Leia that the studio thought was too sexy. The final version featured a toned-down Leia and the addition of R2-D2 and C-3PO. 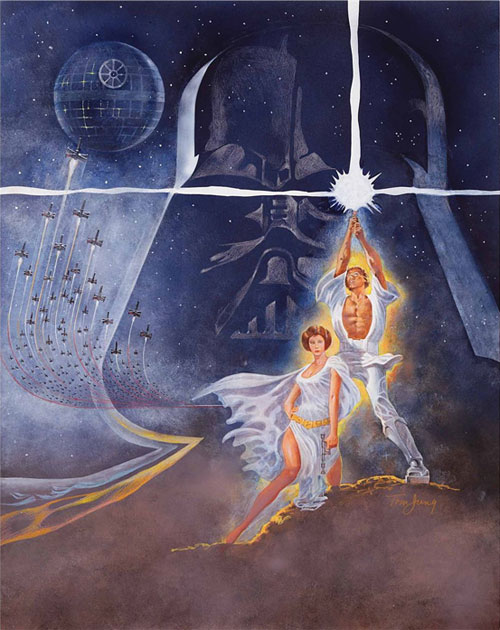 TOM JUNG ORIGINAL CONCEPT ARTWORK FOR STAR WARS: EPISODE IV – A NEW HOPE STYLE A ONE-SHEET POSTER.  Original conceptual artwork, accomplished in gouache on an 18 ½ in. x 24 in. illustration board, by Tom Jung for the creation of the Star Wars “Style A” poster – considered the most famous of all the Star Wars posters. The final version featured the addition of R2-D2 and C-3PO. Signed at the lower right by Tom Jung… According to Jung, the unlikely “cross” formed by Luke Skywalker’s saber sword set against the ghosted background image of Darth Vader seemed to him like a good solution to the “good” versus “evil” theme. With the addition of a fleet of X-Wing fighters attacking the Death Star, he created one of the most enduring cinematic images of the past 50 years. 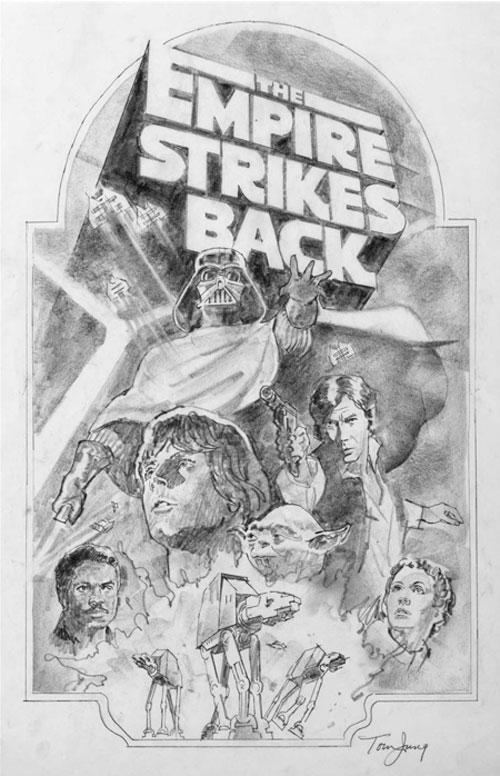 These next two posters may not be original art, but how amazing would they look hanging side by side in the cave? 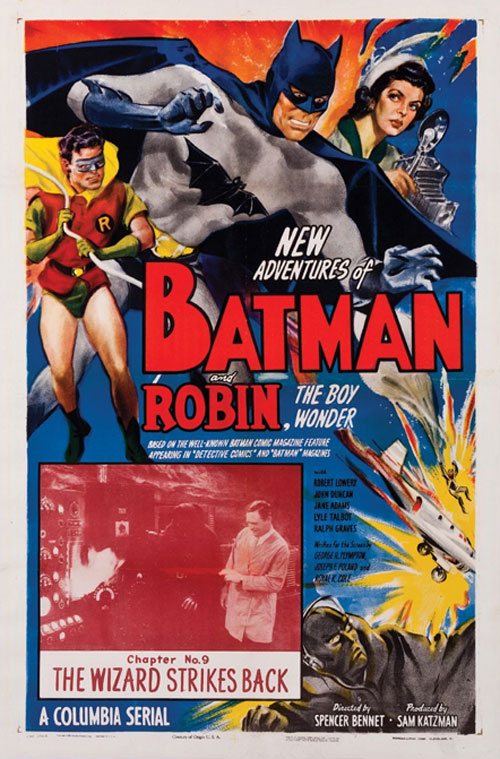 THE NEW ADVENTURES OF BATMAN AND ROBIN 1-SHEET POSTER. – (Columbia, 1949). One Sheet (27 in. x 41 in.) Chapter 9 — “The Wizard Strikes Back”. In this thrilling 15-chapter serial, Batman and Robin are on a crusade to stop the dastardly Wizard, a masked villain with a device that runs on stolen diamonds and can remotely control all machines. This was the second serial to feature the Caped Crusader and Boy Wonder, here portrayed by Robert Lowery and John Duncan. For superhero fans, this rarely seen one-sheet with incredible images of Batman and Robin is one not to miss. On linen with restoration at the folds and touch up of horizontal fold on pink inset. Fine on Linen. 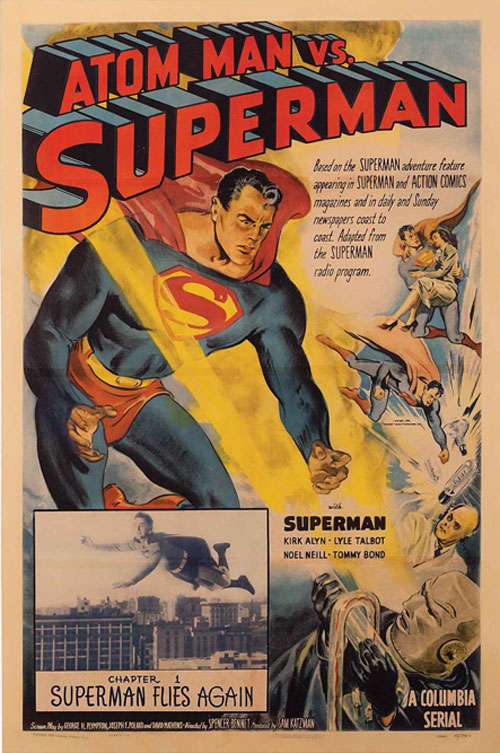 ATOM MAN VS. SUPERMAN “CHAPTER ONE” ONE-SHEET POSTER. – (Columbia, 1950) Shortly before George Reeves would make Superman a household name on television, Kirk Alyn was the first actor to physically embody the comic book super-hero on screen, in two sequential 15-chapter serials, this being the second, which fans rate as even better than the first. Typical for a Chapter 1 poster for serials, this extremely rare
example contains not only what is arguably the finest full-color art rendition of the most famous comic book super-hero of all time, it more
importantly is the only variation we are aware of which features an inset photo of Superman flying over Metropolis, as each chapter release would offer different artwork (most which have surfaced over the years do not even show Superman in the inset section). Colors are beautifully rich and bright with no evidence of fading whatever; this is an older restoration, performed correctly for the time with some professional brush painting to border and fold wear, and paper (as is typical for Columbia at this time period) is slightly age-toned, which could easily be corrected with a new conservation. On linen, with linen selvage neatly trimmed to poster edge; Very Good to Fine overall.

You can view the entire auction catalog online. What would you buy with a blank check?

This is the latest post in response to the weekly blog challenge presented by the League of Extraordinary Bloggers. I’m not the only one emptying out my imaginary bank account. Check out what a few others are buying: Green Plastic Squirtgun, Rediscover the 80’s, Shezcrafti, AEIOU and Sometimes Why, and even more here.