Kurt Russell has starred in some great movies — Escape From New York, Big Trouble in Little China, The Thing — but for me, he is at his best in Tombstone. His mustache alone should have won an Oscar. Seriously, look at that thing!

Tombstone is one of the movies I have watched over, and over, and over (ask my wife, she’ll tell you). I love a good revenge flick, and the second half of this movie is full of Wyatt and Doc Holliday bringing down the thunder. The gunfight scene at the river  where Wyatt “walks on water” is incredible, but the verbal gunfights are even better. Tombstone is filled with amazing dialogue, and I often find myself quoting it in my regular day to day activities. For example:

Wyatt Earp: Already got a guilty conscience. Might as well have the money, too.

(My personal favorite.) Wyatt Earp: [to Ike Clanton] You die first, get it? Your friends might get me in a rush, but not before I make your head into a canoe, you understand me?

Johnny Tyler: You run your mouth awful reckless for a man that don’t go heeled.
Wyatt Earp: No need to go heeled to get the bulge on a tub like you.

Wyatt Earp: The Cowboys are finished, you understand? I see a red sash, I kill the man wearin’ it! So run, you cur… RUN! Tell all the other curs the law’s comin’! [shouts] You tell ’em I’M coming… and hell’s coming with me, you hear?… Hell’s coming with me!

Billy Clanton: Why, it’s the drunk piano player. You’re so drunk, you can’t hit nothin’. In fact, you’re probably seeing double.[Billy Clanton draws a knife]
Doc Holliday: [takes out a second gun] I have two guns, one for each of ya.

Johnny Ringo: You retired too?
Doc Holliday: Not me. I’m in my prime.
Johnny Ringo: Yeah, you look it.
Doc Holliday: And you must be Ringo. Look, darling, Johnny Ringo. The deadliest pistoleer since Wild Bill, they say. What do you think, darling? Should I hate him?
Kate: You don’t even know him.
Doc Holliday: Yes, but there’s just something about him. Something around the eyes, I don’t know, reminds me of… me. No. I’m sure of it, I hate him.
Wyatt Earp: [to Ringo] He’s drunk.
Doc Holliday: In vino veritas. 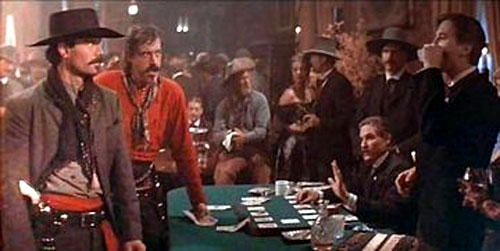 The cast of characters in this film is near perfect with Sam Elliot, Dana DeLaney, and Powers Boothe. Bill Paxton not so much, but Val Kilmer’s Doc Holliday is easily the best cowboy character in the last 30 years. His interaction with Michael Biehne’s Johnny Ringo character is incredible (remember the twirling tin cup showdown?). Heck, they even dusted off Charlton Heston for a small part. They probably just said, ” Chuck, wanna make a movie? You get to play with guns!” “Sure, I’ll get my hat.”

Tombstone may not be entirely based on fact, but it is a fun ride. If you want a good read about the relationship between the Earp brothers and Doc Holliday, I would highly recommend Doc by Mary Doria Russell. And if anyone wants to deal up a hand of faro while throwing back some Laudanum, I’m your huckleberry.