I’ve been a fan of the FX network’s Sons of Anarchy since the first episode. Who would have thought a show about a biker gang would be relevant outside of the 70’s, but due to the show’s intriguing storylines and characters, it kept me coming back for more. This season, it seems like the writers may have run out of ideas and the quaint little town of Charming has a higher (and more gruesome) murder rate than any major city in the country. And then this happened… 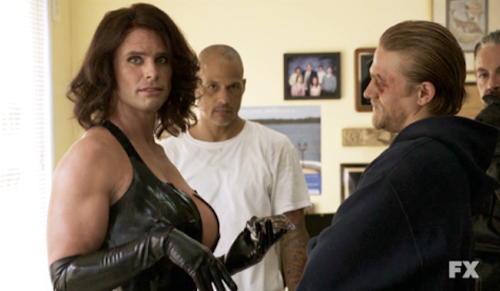 My eyes! What was that?!? Walton Goggins as Venus Van Damme, a full-blown transgender mistress of the night? Whaaaa? Not only did this appearance lessen my interest in SOA, it might very well have affected my opinion of Justified, another one of my favorite shows. How am I going to watch Boyd Crowder now, when all I will see is Ms. Van Damme!

Crud, Goggins is also going to be in Django Unchained.

So, not only has SOA jumped the shark for me, but it appears that Walton Goggins may have jumped as well. sigh.

This week, the League was asked to write about the time a pop culture property jumped the shark. Some other League members have written about Transformers, the Dukes of Hazzard, the X-Files, House, and more!