Deep breath. So, this week’s League topic has asked us to expose our deepest, darkest geek confessions. There have been some serious necks laid on the chopping block already, and I’m pretty sure some stones will be hurled my way soon enough. Here goes…

I have never seen an episode of Star Trek. 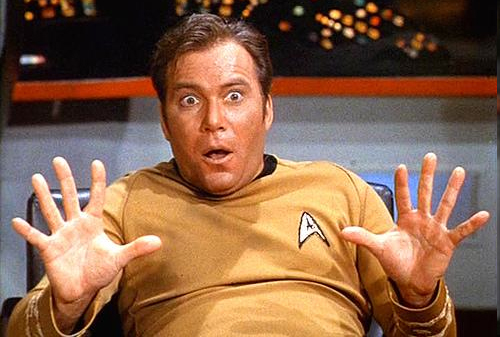 There, I said it! But wait, there’s more. I have only seen Star Trek the Motion Picture and the latest J.J. Abrams Star Trek movie. Don’t ask me who Khan is, because if you do, I’ll tell you that he’s that guy with the annoying little friend from that island? No wait, he’s the traveling circus owner from those two Planet of the Apes movies! Man, I love those movies.

Much like what happened to me with Dr. Who, I think this “travesty” is a result of being exposed to it too young. I saw the original Star Trek in the theater as a wee young lad and it bored me to tears. I thought: If that’s what Star Trek is all about, there’s nothing to see here, move along. I think I actually made a conscious effort to avoid all things Trek after that initial exposure to it. Plus, I like my action stars to look like Vin Diesel not like my dad (or me for that matter!). James T. Kirk just never seemed like a big deal to me, especially in his later years–and don’t get me started on Spock.

Contributing to this apathy is the fact that while I was an adolescent, Star Trek was never “cool.” Sure, now that everyone is a geek, Star Trek is the gospel, but believe me, Star Trek was NOT cool–“Trekkie” was not a name applied to the high school football players or the cheerleaders. If you walked down your high school’s halls and gave the Vulcan sign, you were going to end up spending your lunch hour in a locker.

It’s hard to call myself a pop culturist (and, yes I DO call myself that in the mirror) having never seen Star Trek, but it’s not like I don’t know who all the main characters are–it would be impossible to not know them through the endless depictions and appearances in pop culture. Heck, I even know what a Tribble is (pats his self on the back).

Honestly, I have wanted to delve into the franchise, but it’s so huge and daunting that I’m comfortable just catching the ride with the new movies. I mean, do you start with the original TV series? The movies? Or do you skip all that and go to the Next Generation or Deep Space 9 or…good Lord, I just looked at IMDB and there’s no friggin’ way I have that kind of time to spare! It’s overwhelming, and besides, there are Jason Statham movies to watch.

This is the latest post in response to the weekly blog challenge presented by the League of Extraordinary Bloggers. This week’s topic asked what you to spill your guts and tell your biggest geek confession.