The latest league topic was posted on Monday and I’ve been hearing an awful lot of crickets so far, so I thought I had better kick this thing into high gear. We were presented with 16 movie studs and had to determine who would survive a battle royale between the biggest badasses of them all. Here’s how my bracket played out… 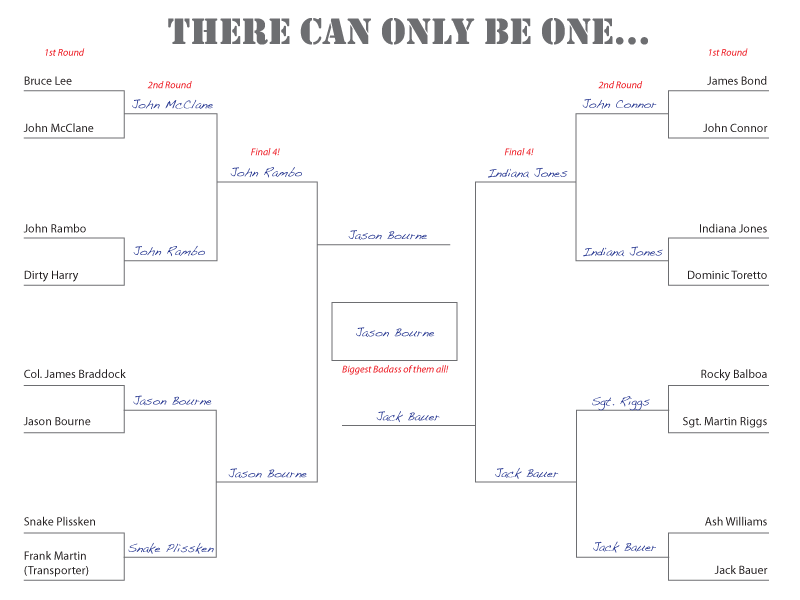 John Rambo > Dirty Harry
Sure, Dirty Harry has a big gun, but Rambo has a rocket launcher.

Snake Plissken > Frank Martin
Snake had an unfair advantage having successfully completely this sort of challenge a few times already.

Jack Bauer > Ash Williams
The most resourceful contender will not lose in the first round.

Jason Bourne > John Rambo
Flaming arrows aside, this match goes to Bourne, who is always one step ahead of his opponent.

Jack Bauer > Indiana Jones
It looks like Indy’s luck has finally run out. I wonder what would have happened if he had squared off against Snake?

And the biggest badass of them all…

Jason Bourne > Jack Bauer
Seriously, how great would this movie be? Two skilled operatives facing off, using all their training and weapons expertise, and it all comes down to a bare knuckle street brawl in the end. Jason Bourne takes the crown after a hard fought tournament.

This is the latest post in response to the weekly blog challenge presented by the League of Extraordinary Bloggers. This week’s topic asked who would win an ultimate duel between pop culture’s biggest heavyweights. Check out who won the brackets of my fellow League members.