Christmas is fast-approaching, and this is the time of year when we dog-ear and circle items on page after page of the Sears wish list catalog mom brought home from the mall, right? Well, maybe that’s not how it works anymore, but I do fondly remember those days. Now, it’s a bunch of scrolling and clicking and BAM! there’s your list all neat and tidy.

Making a wish list as a collector is vital. Everyone knows you like Star Wars, so they buy you any piece of dreck the third world is able to produce. You wanted a Sideshow exclusive Bossk, but you get an Angry Bird Darth Vader instead. If you don’t make a list with VERY SPECIFIC details, you are probably going to be let down by those well-meaning family and friends.

I’ve pretty much relegated my wish list to books on Amazon. I love a good collector book, and they’re easy to buy. Buying a vintage Mego action figure, sealed on the card is not something for the novice. (“$300 for a toy!!! I can get a 300 Angry Birds for him for that price.”) So, for my family and friends, the wish list is simple and straightforward — books and DVDs all tidy and neat in the Amazon wishlist

. But for me as a collector, I have plenty of items that I am going to have to hunt down for myself…

Okay, I hate to admit it but I am getting sucked into action figures for the first time in 25 years. It started innocently enough, by picking up a cool-looking Darth Maul at Target. And then that R2 was really  fun, so I had to have him. And those Sandtroopers, whoa. Stop! Now, there’s a Boba Fett figure out there. Of course, he can’t be found on any shelves, but ebay

is clogged with them. I want one! I am itching to photograph these guys over the Christmas break. Oh, and I also need a Han Solo.

I really do enjoy the hunting and trading aspect of collecting, so rather than just going to Amazon or eBay, I’d rather connect with someone who found this guy in the store and got an extra. I know you’re out there. I’ve got toys to trade, let’s make a deal.

After a recent trip to Wal-Mart, I found a great selection of Hot Wheels vehicles and ended up with a dozen in my cart. I got home and put them in the drawer I have been using to store my other Hot Wheels cars, and realized that the drawer was full. How did this happen? When did I become a Hot Wheels collector?! How can a guy resist this things? They’re $0.97! What else can you buy for less than a dollar these days? I really do try to limit my selection to pop culture vehicles, but there are just so many great vehicles, an extra one usually finds its way home with me. Now, it’s getting bad, because I want older cars that are no longer on the shelf. and I want the variant cardbacks in addition to the loose cars. I’ve been trolling ebay

for them. They’re still cheap, but shipping charges make them not so cheap.

On my list, I am adding Hot Wheels Batmobiles. Heck, I’ll even veer into Johnny Lightning, Ertl, Corgi, and any other diecast manufacturers. I’m no purist. 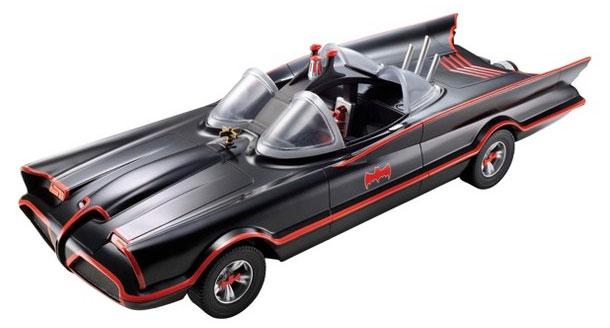 I totally blame my friend Todd for this one. He told me how he had recently picked up the Batmobile from this series and said it was huge and amazing. Well, I had been avoiding it for the huge aspect — both the size and the price — but then I hit Toys R Us with a coupon in hand and there it was. I already have a couple of Batman figures from the line, but now I need a Robin. I don’t want to buy the two pack

for Robin, but that Batmobile needs a sidekick.

One of the main reasons I wanted this Batmobile is because I wanted to see Boba Fett and Han cruising around in it. I am really digging this larger scale. If they start making vehicles for that SWB line, we’re all going to need to purchase storage units.

I love the monkeys — no, not THE Monkees — simians in cinema, King Kong, Dr. Zaius, Cornelius — those monkeys. It’s always fun to add a new ape to the collection, so if Santa put one of those under the tree, I would be really surprised! 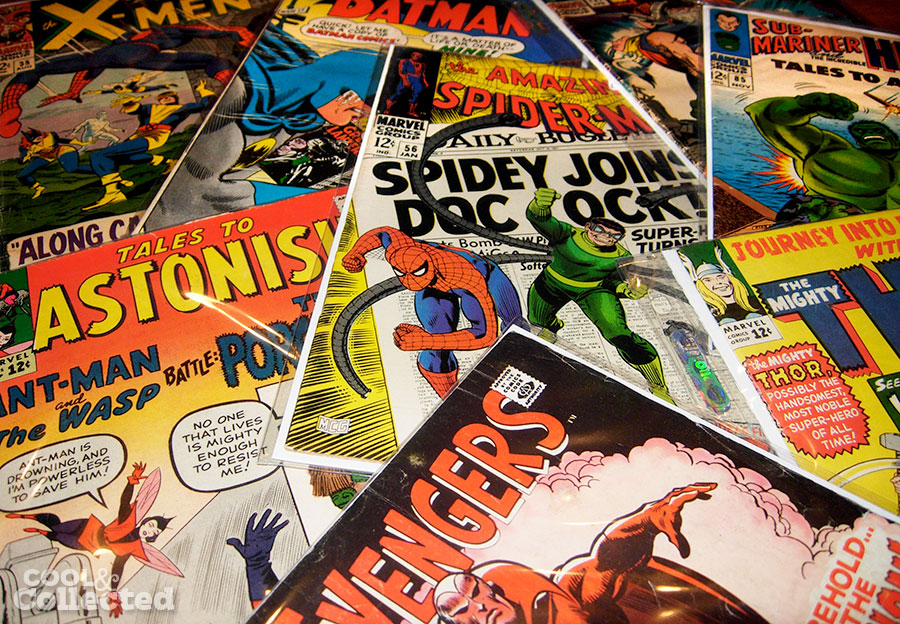 Here’s another item I can’t get enough of lately. I love the old comic covers with their beefy line art and bold colors. I don’t really care about the story inside, I just like to look at the covers and place them on the shelf among the other items in my collection. An old 12-cent Hulk cover beats anything done since the 80’s. I used to be a hardcore comic collector many, many years ago. Now I am more of an art collector, if that makes sense. I don’t buy these for their story lines, I buy them because I like the way the look. I can’t afford original cover art, I’m no condition-snob, and the character and subject matter is not even a priority to me — these things are simply fun to collect.

(This week, the League of Extraordinary Bloggers is writing about their own Christmas lists, so be sure to check them out!)

Oh, and here’s my gift to you… a Christmas Giveaway! 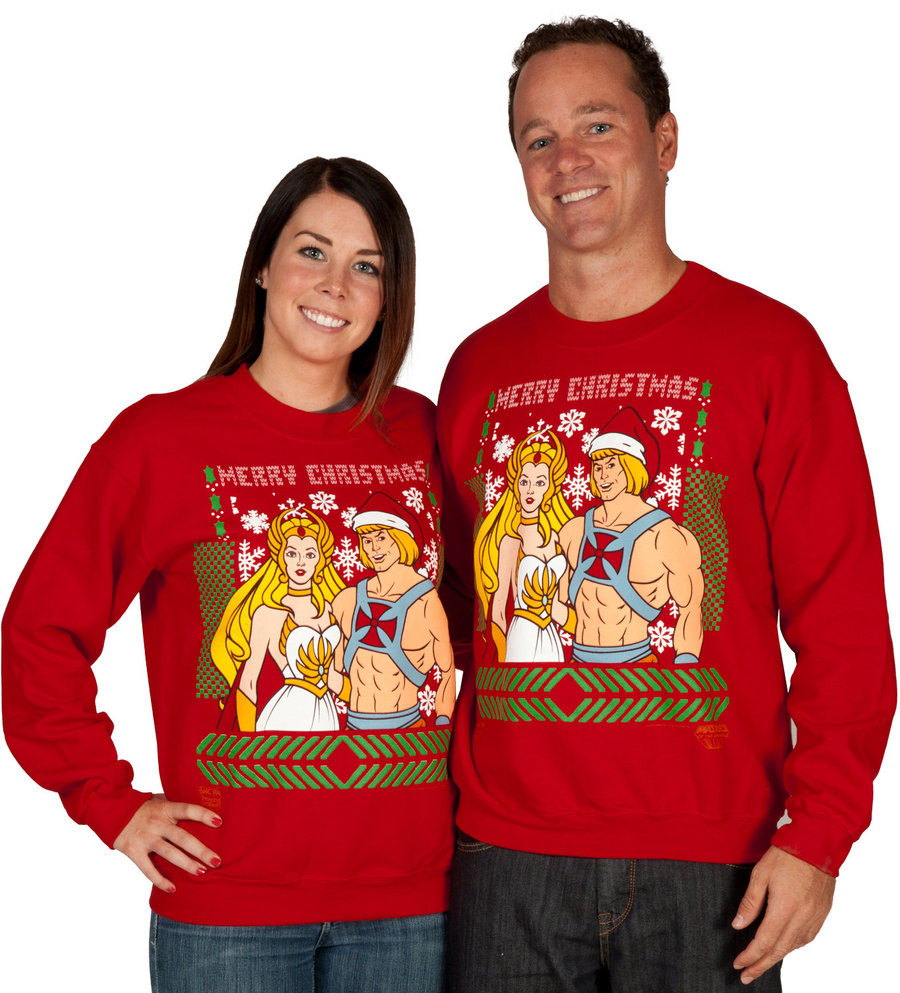 The awesome folks of 80stees.com have offered up possibly the most amazing Christmas sweater ever produced to one lucky reader of this post. All you have to do is add a comment below to enter for a chance to win the He-Man and She-Ra Christmas Sweater. Be sure to include your email address so I can contact you. This contest is open to people with U.S. addresses over the age of 18 only. I will stop taking entries on 11pm on December 12, 2013.

So, add a comment below (what’s on your Christmas list?), and you may be sporting this awesome sweater on Christmas morning. It would be a Christmas miracle!

UPDATE: The contest is closed. Congratulations to our winner: Michael Wirth!