Yesterday, I was lucky to attend an auction of the estate of a local collector (hoarder). Everything in the auction was Star Wars related. Fortunately, I am not a Star Wars collector, because if I was, I would have come home with a way too much and a much lighter wallet.

I went to the auction because 1. I love auctions and 2. this one was obviously made for guys like me. I didn’t plan to buy anything based on what I saw in the auction’s online photo gallery, so I went mainly to observe and maybe learn a thing or two.

The sheer volume of items in this auction was proof that the seller must have had an absolute house full of stuff. There weren’t many high-value items, other than a couple of prop replicas, but you certainly could have stocked an eBay store for a year! The items were selling for less than any collector would want to receive for his items, and I started to feel bad for the seller. I hope he wasn’t in the room!

If you are a collector, I would highly recommend attending an auction like this if given the chance. It can be a sobering experience to see that all those items you bought, coveted, and stored away, surely thinking they would fund your retirement, usually end up being basically worthless.

The auction was not that well-attended, there were probably only 15 bidders present. There were a few dealers and a couple of women who were there for the Barbies and Madame Alexander dolls that were mixed in for some reason. That left maybe eight or nine collectors. One was there for just the trading cards, another woman was there for the toys, most likely buying them for her kids to play with rather than as a collectible, and then there were two guys that only seemed to want the expensive model kits and life-size replicas. 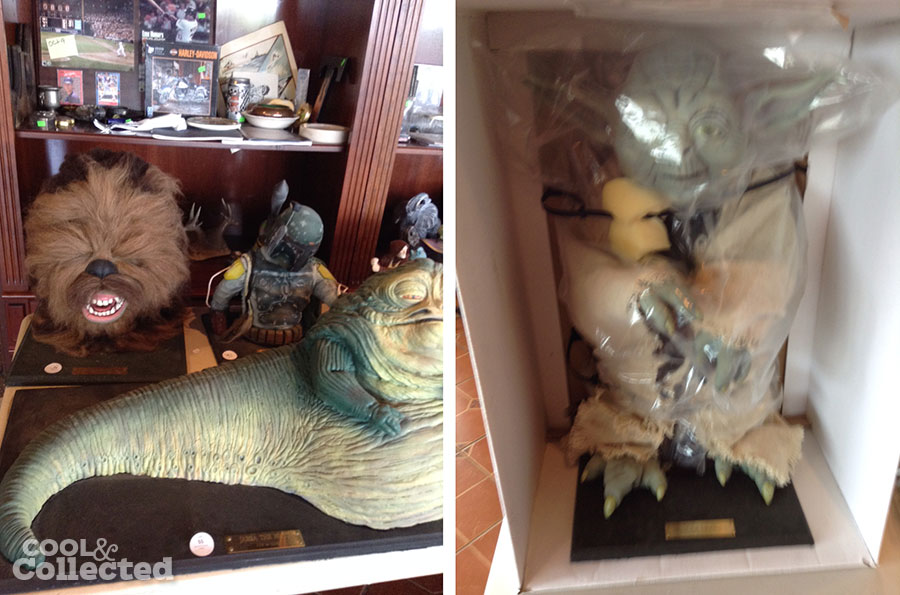 These statues and props were the big ticket items, and brought the best prices of the day. The Chewbacca head sold for $200, and Yoda was $300.

With so little competition, the prices were very, very low. The auctioneer was clearly out of his element and seemed almost annoyed that no one was bidding against each other. If I went with the intent to buy Micro Machines, I could have come home with 40-50 sets for under $250, but I was a very good boy that day, and stuck to my non-Star Wars collecting guns — for the most part.

I was familiar with Rumph mugs

because they made an incredible one for King Kong that I have been wanting for years, and when I saw these two mugs, I had to try for them. I really only wanted the Chewie one, but the auctioneer put them up in a lot, so I ended up paying more than I wanted to, but still totally worth it. These mugs were one of the few items that actually had a minor bidding war. 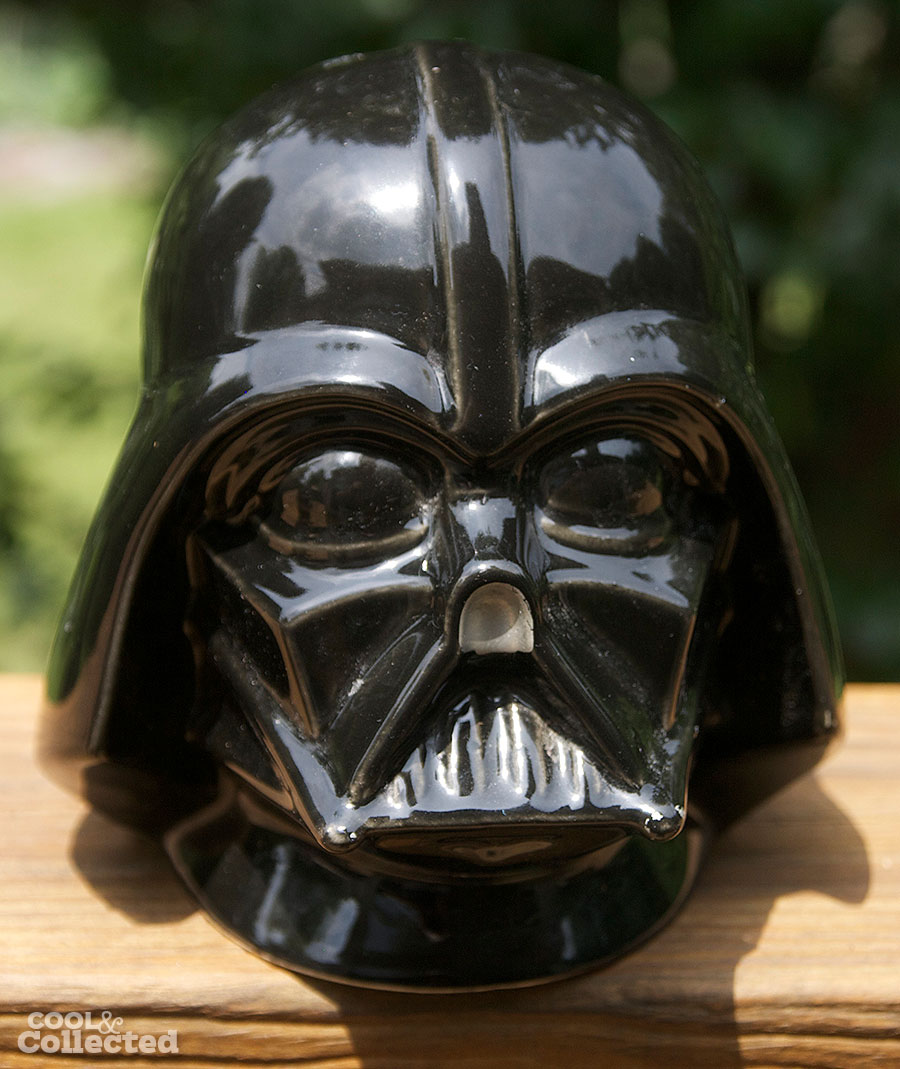 Unlike the mugs, this ceramic Darth Vader bank from 1977 garnered zero interest, and I scooped it up for just two bucks! I love collecting things like this because their shelf life is shorter than durable toys and items made out of plastic. How many kids do you think ended up dropping their Vader bank and shattering it into a million pieces?

These vintage iron-on transfers were a huge kick in the nostalgia pants. I remember watching my mom iron on transfers like this when I was a kid. These aren’t a high-value item, so I think I might just make myself a Han Solo shirt — and maybe I’ll make a couple for my kids. Maybe. 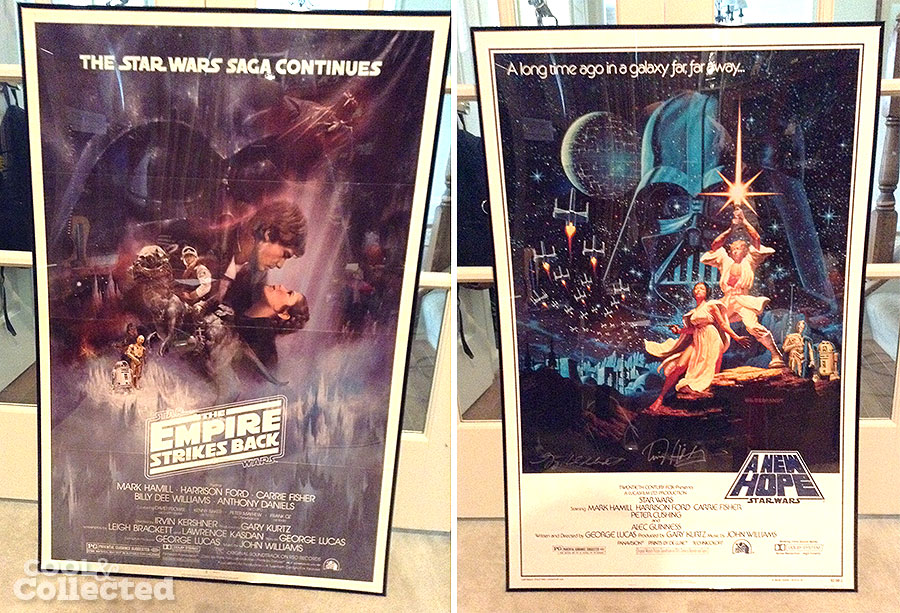 These were the two prizes of the day for me. An original folded one sheet for the Empire Strikes Back and a New Hope poster signed by the Hildebrandt brothers. These posters were sitting in a pile of posters and comics and almost weren’t auctioned that day, but when everything else was sold, the auctioneer was about to call it a day unless someone saw something else they wanted to bid on. I brought these two up and got them for the opening bid (it was low) — the auctioneer knew he gave these away and wasn’t too pleased, but by that point, there were only a few bidders left, and many of them had already checked out and couldn’t have bid anyway. I would have loved a shot at the rest of the posters but just wasn’t sure if they were originals — Star Wars posters are the most faked posters out there, and you have to be very careful, but I would have taken a chance, knowing that these came from the collection of a serious Star Wars collector.

So, for not being a Star Wars collector, and not going to the auction with the intent of buying anything, I spent a fair bit of money and wish I had bought more. Such is the life of a collector.