This week, the League has been asked to recall a pop culture property that they hated as a kid. Honestly, my adolescent self was pretty easy to please, and I had a tough time coming up with anything–but then it hit me like a bucketful of ice cold water spit out by an anteater… 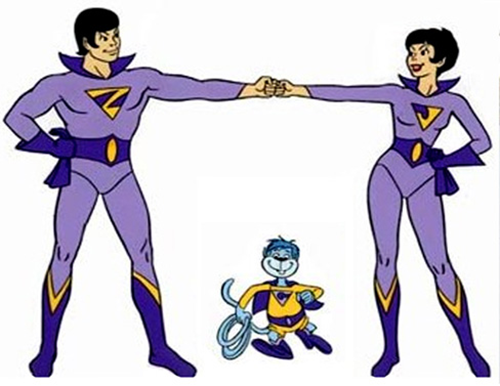 I loved to watch my favorite super heroes combine forces to fight nefarius villains. Super Friends was a Saturday morning staple, but for whatever reason, the Wonder Twins seemed to get a lot more air time than anyone else, or at least that’s how I remember it.

Two people/aliens who have no powers, unless they give each other a fist bump, along with a blue monkey named Gleek, and his unusually long tail. Usually, two super heroes fighting as a team is pretty cool, but not this duo. Zan could turn into water, and Jayna could transform into an animal. On paper, that might sound pretty good, but it never approached the level of awesome that it might have. No, in the cartoon, there were lots of buckets of water being sloshed around by eagles and such.

This parody video pretty much sums it up…

Sean Hewlett is a much better writer than me, and has an excellent Wonder Twins “tribute” over on McSweeney’s:

THE PERSONAL JOURNAL OF ZAN, THE MALE HALF OF THE WONDER TWINS.

The more I think about it, the more I believe that my biggest problem with the Wonder Twins might have been their little blue sidekick, Gleek. It had to be the comedy relief that grated on my nerves so much. Super heroes wee serious business to me as a kid, and characters like Gleek just cheapened the whole thing. Some similar characters who made the Hulk rage come on were Snarf, Scrappy Doo, Orko, and Jar Jar. Don’t try to defend them.

Other League members have sheer hated boiling in their veins. Check them out: Toyriffic, Monsterfink, Dorkette, Geeky Vixen, and more!