Last week, I showed you some of the amazing vintage Batman items that were up for bid at Hake’s, and today I thought I would show some great items based on another one of my favorite pop culture icons — Buck Rogers. So sit back and enjoy these amazing artifacts from the 25th century, but you need to act fast if you want to add any of these items to your collection as bidding will start to end on June 21! 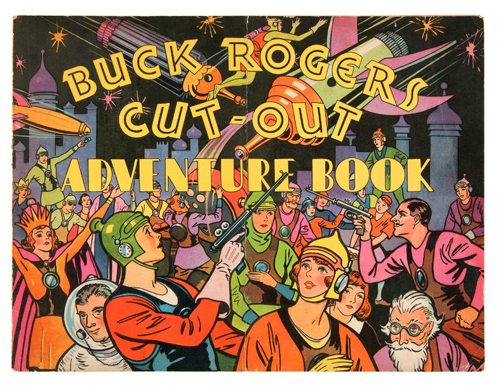 BUCK ROGERS CUT-OUT ADVENTURE BOOK” COCOMALT PREMIUM
9.25×12.25″. 1933. Front cover has crowded art scene including Buck with space gun and Wilma nearby and numerous other characters in bkg. along with rocket ships and man with jet pack flying in air. Back cover has “Diagrams Of 25th Century Inventions” including “Rocket Ship Plane, Flying Space Suit Equipment, Flying Submarine”. Inside front cover tells “The Story Of Buck Rogers” and inside of back cover has ad for “Cocomalt” and includes four panels at bottom showing “How Scenes Will Look When Assembled”. Comes with four separate two sided sheets, each 8×12″ matching images on inside back cover including “Dr. Huer’s Laboratory, The Court Of The Queen Of Venus, The Attack Upon Niagara, The Metal Cities Of Venus”. Comes with photocopies of letter, instruction sheet and stage frame but otherwise 100% complete including all 20 cut-outs. All have been neatly cut and are complete with fold over stands. Covers have some lt. wear. VG. Two sided backdrops have a few lt. handling creases but are VF. Cut-outs have minor wear and some aging but overall most have VF appearance. One of the rarest and most elaborate Buck Rogers premiums. Rarely found with all 20 cut-outs. Great design and wonderful graphics. 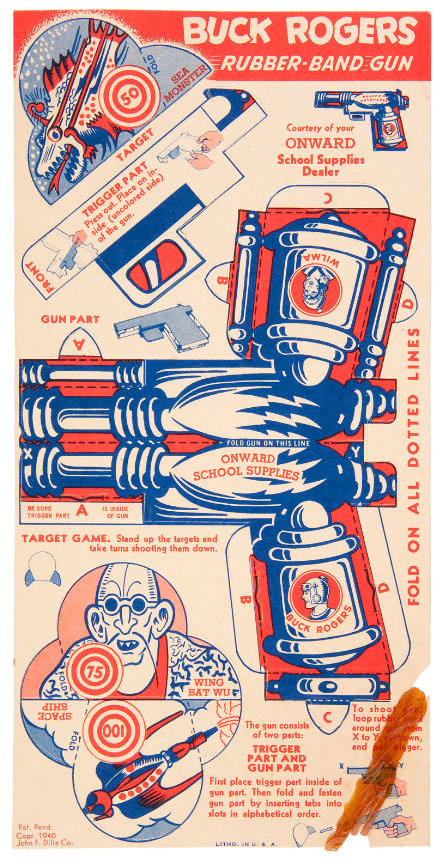 “BUCK ROGERS IN THE 25TH CENTURY” PREMIUM ORIGIN STORYBOOK PLUS RUBBER BAND GUN PREMIUM
6×8″, 32-page book on glossy paper. ©1933. Book is illustrated throughout with small choice color illustrations and features great color cover by Phil Nowlan and Dick Calkins. Book has handling wear with pinch creases to spine. Inside cover has penciled name and date and some tiny clear tape repairs. Pages are off-white and Exc. Back cover has lt. soiling/aging. Overall VG. Comes with 5×10″ tan stiff paper sheet with punch-outs and was issued by Onward School Supplies ©1940 John F. Dille Co. Includes gun with portraits of Buck and Wilma on the handle plus targets “Spaceship, Sea Monster, Wing Bat Wu.” Some slight loosening of perforations but all remain intact. Card has some aging along side and bottom margins but punch-out components remain clean and Exc. 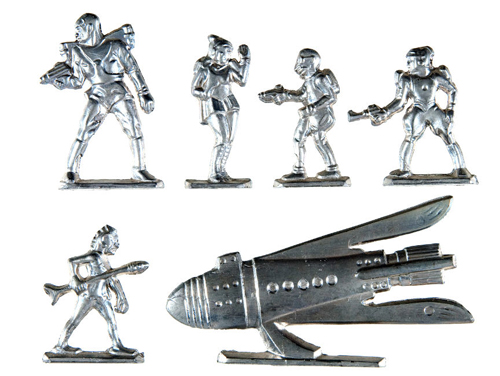 GROUP OF 22 LEAD COMIC STRIP CHARACTERS MADE FROM 1930S CASTING SETS
Figures range in size from 1-3/8″ tall to 2-5/8″ tall including 4.5″ wide rocket ship. Figures were made from mold sets issued by Rappaport. Includes five Buck Rogers characters including Buck and Wilma along with rocket ship. Other comic strip characters include Popeye, Wimpy, Olive Oyl, Dick Tracy, Chief Patton, Junior, Smitty, Boss, Harold Teen, Shadow and Pop Tate, Little Orphan Annie, Sandy, Daddy Warbucks, and robot we believe from Tiny Tim. A few show darkening from aging but rest are bright and shiny. Overall VF/Exc. Unsure of when figures were produced but well made.

“BUCK ROGERS ROCKET SHIP” 1934 BOXED MARX WINDUP
12.25″ long cardboard box has wonderful graphics on all four sides. Two sides feature Buck and Wilma watching rocket blasting off and other two sides show line of rockets leaving earth. Text includes “A Flashing-Roaring-Speeding Model Of Buck Rogers Famous Inter-Planetary Rocket Cruiser”. Box has some dust soil which is more heavily pronounced on one image of rockets trailing each other. Same image on reverse side has 1″ area near center with small puncture and lt. creasing. Two corners on right side have small tears repaired with cellophane tape which has yellowed. Box is overall VG but remains structurally sound and color remains strong. Box comes with single original plain cardboard insert that fits around the nose cone. Very attractively designed 12″ long tin litho rocket ship includes detailed images of Buck, Wilma and Dr. Huer in cockpit windows. Flint holder is missing but replacement is easily available. Has separate original tail fin flint cover which is often missing. Underside of the nose cone has full figure Buck Rogers image surrounded by series of ovals. Toy works exceptionally well and travels forward as pinging sound is made. Underside has narrow 3/8″ scuff mark worn down to bare metal and toy has trace of lt. wear here and there but bright and Fine overall. Wonderful graphics on both box and toy. 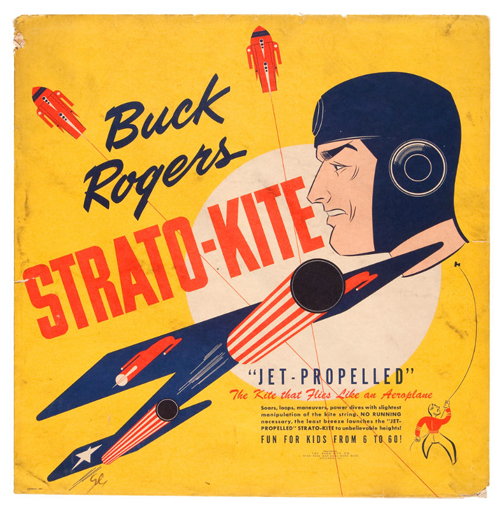