I know some pretty smart people. Earlier today, I posed a question here on the site and on Twitter and Facebook, asking if anyone knew what these were… 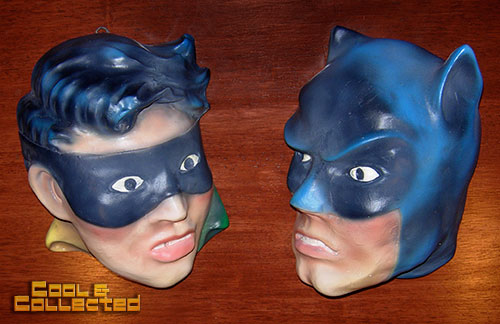 Soon after, Steve weighed in on Facebook with this response:

They are string holders. There’s some debate as to whether those are really vintage 60s pieces. Some sellers call them 40s-50s pieces, but I don’t think they are. The tell is that they are marked copyright DC Comics. I might be wrong here, but I don’t think DC started marking their licensed merchandise like that until the 1970s; until then it was NPP (National Periodical Publications) or Superman, Inc. (for the really old Superman stuff). They are still neat display pieces and look great, though. 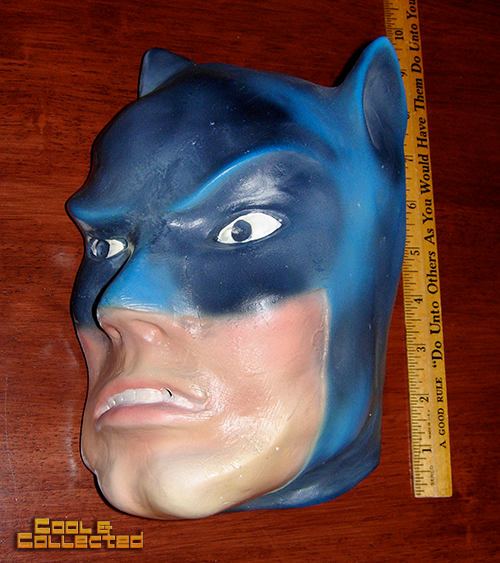 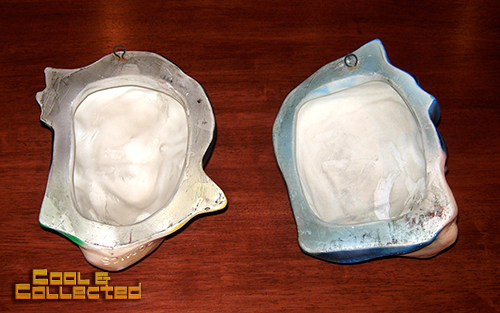 Todd also left a comment on the original page with the correct answer–I’m so glad to know all these smart folks! These are indeed vintage string holders. Back in the days before Scotch tape was a household word, people used string to tie up the parcels they were going to mail, butchers used it to tie up their meat products, and stores would use it to bundle up their packages. String was everywhere, and people needed a way to store it, so there were these things called string holders.

This Batman and Robin pair would have hung on a wall, and a strand of twine would spill out from their teeth–kinda weird, I know, but it worked! I can imagine an industrious young boy tying up the newspapers before his paper route, using one of these string holders.

This set is made out of chalkware, which is very fragile and easy to break. Luckily, these two heads are in perfect condition with no chips or cracks. Now, I need to make sure they stay that way!

In for a penny…

Buying these string holders was actually a difficult process for me. Honestly, I don’t typically buy big ticket items, and tend to stick with less expensive items for my collection. I am good about only buying what I can “afford” — meaning, if the funds aren’t in my Paypal account, I’m not going into debt to buy an item.

But then I saw the Batman string holder.

I search for vintage Batman items all the time, and had only seen these string holders at the big auction houses before–even Google barely registers any results. I watched the auction on eBay all week, and when it finally got down to the wire, I hesitantly put in a high bid that exceeded the amount in my “funny money” account, breaking one of my cardinal rules of collecting.

A few minutes later, the bidding went up and the Batman string holder was mine. Oh boy, now how am I going to explain that overdraft withdrawal from the credit card to my wife? Well, my birthday is coming up, so I just did her shopping for her–yeah, that’ll work!

Then I got an email from the seller asking if I want the matching Robin string holder too–and he needs to know ASAP, because other buyers had been asking him about it. ACK! I can’t NOT have the matching set! But another huge hit to the wallet? Ugh. After pondering the situation for a few minutes, there was only one available response…

I can’t be the only collector who’s gotten in over his head by buying a prized possession. What item bought you a ticket to the doghouse?