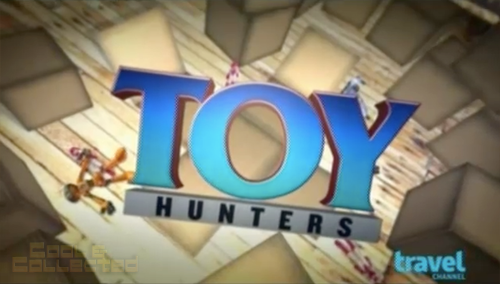 The Travel Channel served up a special treat for us toy collectors on Sunday night. A new show called Toy Hunters aired, which follows around toy collector and dealer Jordan Hembrough on his quest to find rare and valuable toys.

The show is a carbon copy of the American Pickers formula, but while Mike and Frank search for rusty gold, Jordan is searching for action figures. Jordan has been collecting and dealing in toys for 25 years, which seems like a stretch since he looks about 30 years old. The first (and hopefully not “only”) episode has Jordan searching the attics, basements, and garages of America for toys he can sell at New York’s Comic Con.

The search begins in toy country, USA — Cincinatti, Ohio — home of Kenner Toys before it shut down in 2001. Many of Kenner’s employees still live in the area, and when they were employed, they apparently stole a lot of the products and prototypes they developed (kidding — sort of). 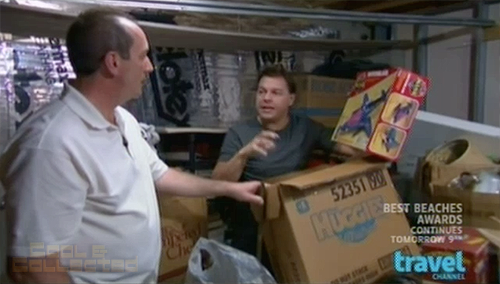 Jeff is a former Kenner toy designer who worked on the M.A.S.K. toy line, and he designed the Slingshot vehicle, among other things. The toys were designed after the cartoon, and Jeff had three mint in box (MIB) vehicles–the Slingshot, Firefly, and Switchblade. Jordan offers $100 for all three, but Jeff will not sell the Slingshot for any amount (good for him!). He lets the other two vehicles go for $75.

The show is great for collectors and non-collectors alike because it offers some interesting tidbits that you may or may not already know. However, there was one statement that made me scratch my head. The show mentioned that M.A.S.K. toys were introduced in 1985 and were a precursor to Transformers. Huh? The last time I checked, the Transformers were introduced a year earlier in 1984. 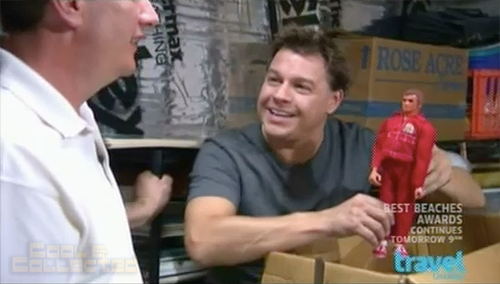 After rifling through some more boxes, Jordan finds a Six Million Dollar Man Steve Austin figure (nope, not a doll) and a bunch of Care Bears and an Ewok plush doll, and buys all of these items for $210, thinking he can sell them for $600.

Jordan has toy scouts across the country who are always looking for toy collections that are for sale. Rob Meyer is one of his scouts, and he takes Jordan to visit a guy named Geoff, who owns the Queen City Comic and Card shop. The store is located down the street from the old Kenner headquarters, and its employees would frequent the store and trade some of their (stolen) toys and prototypes for comics and sports cards. 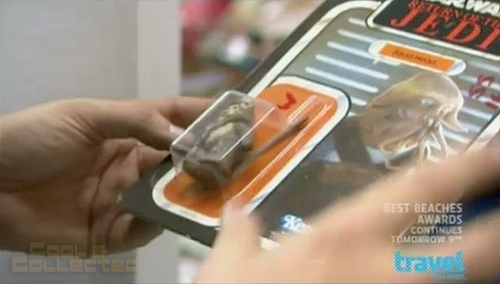 Jordan searches through the storeroom and finds boxes filled with vintage Star Wars carded action figures. I would be thrilled to own any of those figures, but the show focuses on a Wicket Ewok figure on a Squidhead card. This is not an error, it’s actually a packaging sample that was used internally at Kenner.

This was part the show that I found pretty informative since it told us about the original Star Wars 12-back cards and how the figures were painted rather than photographed, since the figures didn’t actually exist yet. This is common knowledge for Star Wars fans, but its interesting to other collectors and viewers who mightbe watching. This show has to have a fairly narrow audience, but the more they can inform people, the more attractive it will be to non-collectors, and get them excited about the hobby and make them want to tune in again.

In the box of action figures is a small plastic bag with a light blue, unpainted figure in it. Check this out… 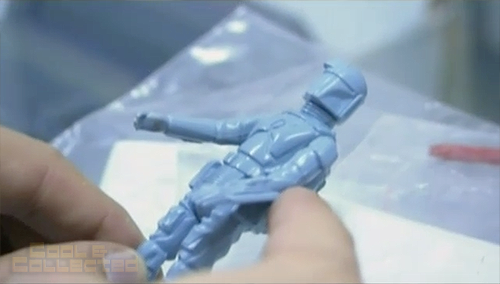 The mythical rocket-firing Boba Fett mail-away action figure with its red rocket. Geoff obtained the figure in a trade 25 years ago for ten dollars worth of baseball cards. After having it authenticated by a Kenner engineer, Jordan tells him the figure is worth ten thousand dollars. I particularly enjoyed this part because I learned a good bit about the figure and the history behind it. I knew the basics, that the figure was never produced because kids would shoot their eyes out, but I never knew there were L-latch and J-latch versions of the spring housing produced. Now I know what to look for next time I come across one (Ha!).

Geoff agrees to have Jordan act as a broker in trying to sell the figure at the New York Comic Con. As Jordan leaves, he says this figure brings the “wow factor.” Doesn’t he know that Darrell the Gambler on Storage Wars is the only one who can use that phrase?

Next up is Ron, another former Kenner designer. The show dubs him as a “Newbie” because he has never sold his toys before, which I think is kind of rude, especially after watching Jordan proceed to lowball him with his offers. Ron worked on toy lines such as the Real Ghostbusters and Batman Returns.

Taking a note from American Pickers and Pawn Stars, the show puts up the occasional information screen, which I fully applaud. 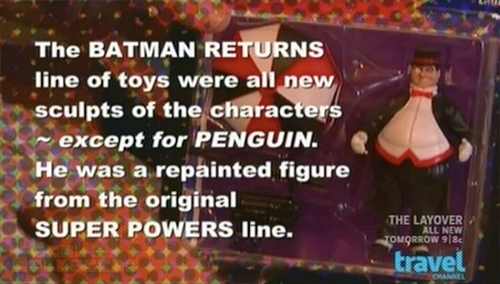 Jordan finds an Arctic Batman action figure which isn’t an amazing toy on its own, but it has a green card attached to it which was used in Kenner’s internal review process, which bumps up the value by $20 or so. For $40, Jordan also buys a 1977 Star Wars Death Star game which Ron had as a kid.

While climbing around in some boxes, Jordan yells, “Do you know how much I can get for this?” which turned me off a bit. I really wish the show focused more on the collectors and their toys rather than the pursuit of the almighty dollar. I understand we all want to get rich with the ultimate find, but I would prefer more enthusiasm from the “collector” in Jordan than in the “profiteer” in him. 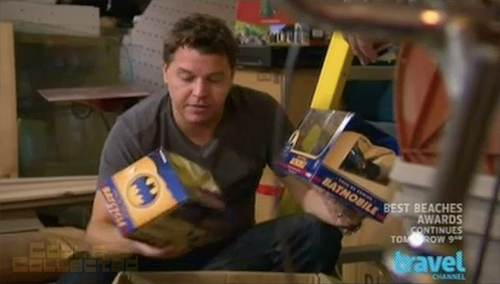 So, what was in the box? Some Corgi Batman vehicles that Ron designed. Jordan buys a Batmobile, Batboat, and Batcycle for $70.

Apparently, The Toy Hunter has a “Danielle.” His Danielle is named Nikki, and she finds him leads across the country and sits at a desk covered in action figures (that were probably put there for the show).

Tom (Yoda) in Dayton, Ohio is the publisher of Tomart’s Guide and has a warehouse full of 400,000 toys. He’s not to keen on selling anything but when Hollywood calls and asks you to be on a TV show, I guess you feel obligated to let them come take a peek. 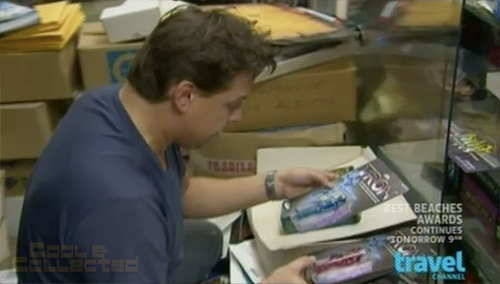 Jordan searches through a display case and finds a couple of great Tron lightcycles from the original 80’s toy line. When Tom refuses to sell them to him, Jordan whines like a high-pitched five year old, “Come on!”

One of the big problems I had with American Pickers in its early shows was that they ripped off people and strong armed them into selling items they didn’t really want to sell. I’d hate to see that happen on this show, which deals in toys — remember, toys are fun! 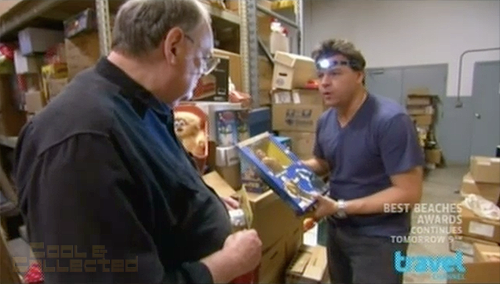 Jordan is offered the chance to look through the warehouse, which turns out to be his dream come true — 300,000 uncataloged toys. He finds a Battlestar Galactica 12″ Colonial Warrior in the box and offers $15 for it. The toy originally cost $24.99 when it was released in the 70’s so the $15 was pretty insulting in my opinion. Tom grudgingly agrees to sell it for $20. 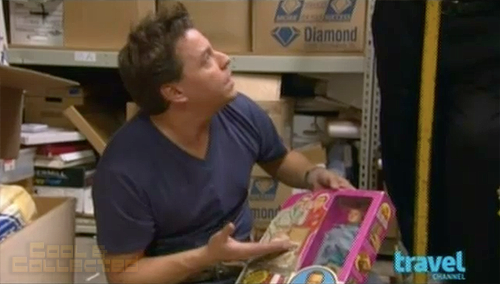 The next find is an original Oscar Goldman in its box — of the 40-Year Old Virgin fame. Six Million Dollar Man toys were Kenner’s first action figure line, and Jordan takes Oscar home with him for $40, along with a Kevin doll from Home Alone. 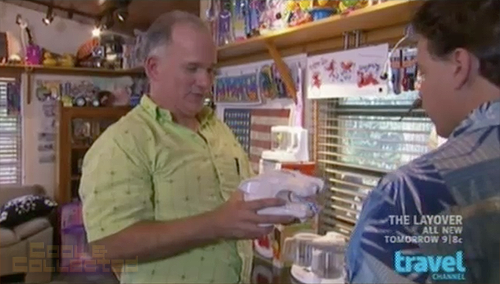 Jordan heads to Miami, Florida to meet with José, who has an amazing collection of rare Thundercats toys and prototypes. I wish the whole show focused on looking through José’s collection. The pride and joy of his collection is the prototype of the Thundercats’ Mad Bubbler figure, which was never released to the public. 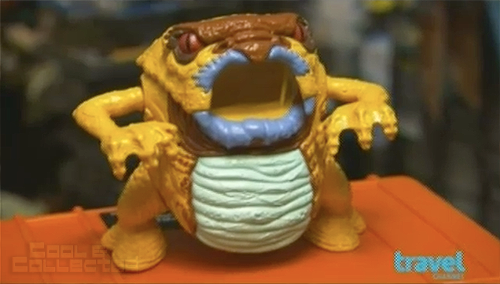 Jordan geeks out a little bit at this point, which I actually enjoyed. When a collector sees a true holy grail, it’s always fun to see their reaction. Jordan thinks he can sell the Mad Bubbler for $15,000, and José reluctantly agrees to let Jordan broker it for him.

After all the hunting, it’s finally time for the big event — New York Comic Con. Jordan hopes to make $2o,000 at the show.

The toys fly off the shelves fast and furious. A Boba Fett cosplayer and his giddy friend look like they might be the perfect buyers of the rare Rocket-Firing Boba Fett figure. They are incredibly enthusiastic about seeing it, but when Jordan tells them it is $20,000, they are quickly deflated and walk away. It looks like Jordan won’t be able to sell either the Boba Fett or the Mad Bubbler, but then a heavily-tattooed guy in a Tap-Out hat walks up. After seeing a bunch of carded Star Wars figures, he says he already has all of them and wants to see something else that’s hard to find.

“Miraculously,” the Boba Fett figure is the only figure that is missing from his collection and he agrees to buy it on the spot for $17,000! 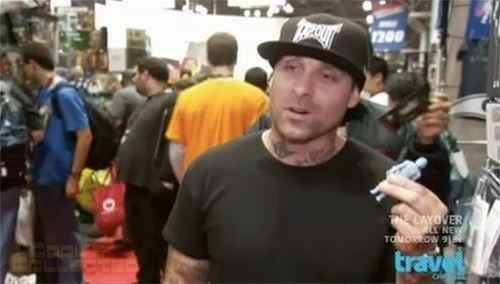 He holds up the figure like he’s about to smoke it and says he is very happy to now own a “very expensive Bobabett.” Yes, he called it “Bobabett,” I watched it three times. At least he knew what he was buying with that $17k. The skeptic in me has a tough time believing this transaction really occurred, but how much of reality TV is actually real on any show?

So, Jordan made his target of $20,000 and all is right in the world. I thoroughly enjoyed this show and hope to see many more episodes in the future, and I’m sure if you are a toy collector or fan, you will enjoy it as well. If you didn’t blink and were lucky enough to catch it, what did you think?