This episode of Toy Hunter has Jordan Hembrough searching for toys in San Francisco, California, an area rich in toy history. Worlds of Wonder, LJN Toys, and Mattel were based in that area, so Jordan is hoping to find the goods. His first stop is a visit to Brady’s Spider-Man shrine. This place is incredible! Brady has been collecting Spider-Man items for 22 years.

(I would highly recommend checking out this link where you can see all of Brady’s collection in detail. Not only is it Amazing, it’s also Spectacular!)

Jordan finds a vintage remote control car made by George Barris’ company and buys it for $30. He also buys a Mego doll and a battery operated Remco figure for $25 each.

Brady has a beat up copy of Amazing Fantasy #15 which is valued at $2,000. A mint copy would be worth over a million dollars! Jordan almost drops it–oops! I’m guessing this comic book is where the title of the show came from, but I’m not sure I would call Amazing Fantasy a “magazine.” 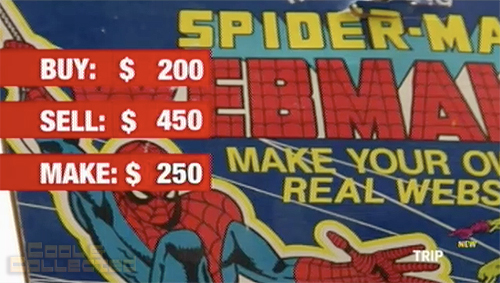 from Chemtoy. This thing is very cool and has some great graphics on it, and Jordan buys it for $200, thinking he can sell it for $450. That sounded awfully high to me, so I headed over to eBay during the commercial break to see if any were available. Now here is where all of our collector fears are coming true. Pardon this little sidenote…

A quick search of sold items on eBay showed that two of these exact items sold in the last couple of weeks. One went for $21.83

(and that was with an additional pack of refills). Last night, there was one available

This was one of the great fears of collectors when these collector-focused shows started to show up on our televisions. The collecting community was abuzz over the fact that these shows would make everyone think their toys were worth a fortune and start to charge accordingly. It seems like those fears may be turning into a reality. I would love to have one of those Webmakers, and would gladly pay $20 for one, but I’m certainly not interested in it for hundreds of dollars. I just hope Jordan never finds any King Kong toys on the show.

The next stop on Jordan’s California trip is with Rusty, a woman who loves vintage board games and toys. Jordan buys a Battleship game for $20, a 1973 Lite Brite for $25, and an Easy Bake Oven for $25, but then he finds the good stuff… 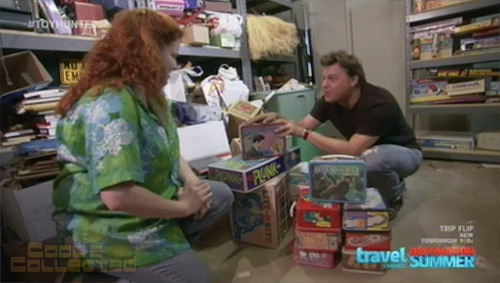 Lunchboxes! I do love a good lunch box. Rusty has quite a selection and agrees to part with a stack of them. Jordan pays $20 for each of them but the Brady Bunch lunch box has its thermos, so he pays $40 for that one. 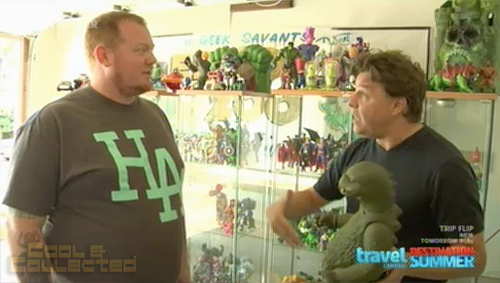 The last stop was my favorite part of the show. Jordan visits John, who is a big guy with a big man cave in his garage. John has an incredible collection that seems to touch on just about everything. I could spend a month in John’s garage–just slide me a Slim Jim under the door every now and then and I’ll be fine.

John sells his Shogun Warrior Godzilla for $90. Why’d you do it John! I have one of those Godzillas and it is one of my absolute favorite items. You’ll have to pry mine from my cold dead hands.

John also has some great Mego toys, including the Star Trek playset and a bunch of ChiPs dolls, but Jordan can’t get a good price, so he passes on them.

The last treasure of the show is a Luke Skywalker figure that catches Jordan’s eye. This is the figure with the rare double telescoping lightsaber and Jordan buys it for $175.

Like in previous episodes, I fear for Jordan. I don’t think he’s going to be able live off his toy buying and selling, because all of his prices were fair or overly-fair. We might need to start a fundraising drive or something to help the guy out. (Of course, his prices do seem to generate less grumbling here on the internet, and a more enjoyable experience overall.)

What did you think of the show? Do you think Jordan’s prices are fair? Let’s hear it!