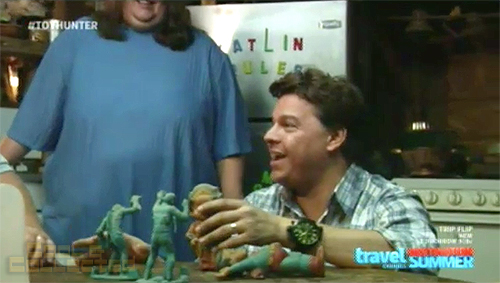 In this episode of Toy Hunter, Jordan Hembrough is looking for toy gold in the Great Smoky Mountains of North Carolina. His first stop is at Christine’s house which is filled (and I do mean FILLED) with toys and collectibles that she and her husband have bought at yard sales. There’s old mixed with new and it would take months to dig through everything, and Jordan finds a set of vintage Battlestar Galactica collector glasses for $18. He also finds some cool Marx Universal Monsters figures

Christine’s husband, Rennie, enters the scene, looking like the long lost ZZ-Top member–and he has a twin brother too! He takes Jordan upstairs where Jordan finds an Electronic Detective game

by Ideal with Get Smart’s Don Adams on the cover. Jordan explains that items with celebrities on them are always collectible. While this might be obvious to many of us, I enjoy these little tidbits of information. He buys the game for $20. 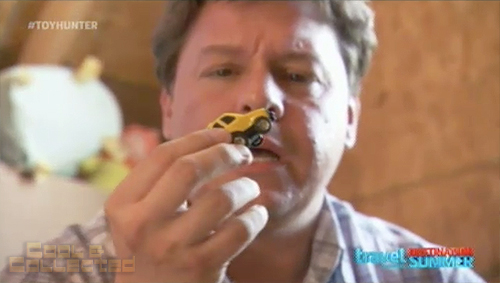 After more digging, Jordan finds a box of old Transformers, which includes a small Bumblebee figure that he doesn’t recognize. He thinks it might be a prototype. The Twitterverse absolutely lit up at this moment, with countless people yelling “It’s Cliffjumper!” thinking Jordan should know better. I have two theories on this: 1. Jordan knew exactly what it was but needed to ramp up some drama, or 2. He really didn’t know–and if he didn’t, so what! I know NOTHING about Transformers and even less about most other things. Just because you’re a toy collector or dealer doesn’t mean you have to know everything about every toy line that ever existed. Personally, I didn’t know what the figure was, and I enjoyed the little mystery.

Jordan’s next stop is a consignment store called “Flat Creek Pickers” which is owned by Marne. There are no toys in sight until Marne shows Jordan the back room, and even then it’s not too exciting–lots of Barbies and recent toys. There’s a Howdy Doody doll in excellent condition which Marne thinks is worth $100, but Jordan tellsher the truth of the matter is that there aren’t many collectors left out there, so he leaves it behind. 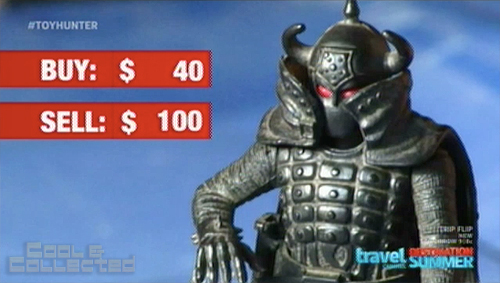 At this point in the show, Jordan does something that I love to do–he’s digging through boxes and boxes of junk toys. Amid all the Happy Meal toys, he unearths one of the coolest action figures ever made– a Lord of the Rings Knickerbocker Ringwraith

! Marnie thinks $4 would be a fair price, but Jordan steps up, and gives her $40, so he can sleep that night without too much guilt. 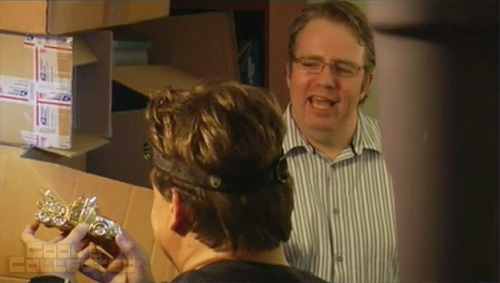 Jordan heads down to Charlotte to meet Trenton, a collector with a baby on the way. Trenton needs to clear out some space and raise some diaper money. There are boxes of toys stacked to the ceiling, and one box holds a Blue Thunder helicopter which Jordan buys for $20.

After some more digging, Jordan strikes gold, literally–a Gold Rodimus Prime! This figure was a Lucky Draw figure from 2004 that was given away in contests. Trenton explains that it is extremely rare and wants $1,000 for it. Jordan can’t come close to that price but offers to broker it for a commission.

Jordan and his friend Rob Meyer visit Pete Sinclair, who has a HUGE collection of Transformers. Pete tells Jordan about the mystery Transformer he found in that north carolina attic. It’s a Bumblejumper

and Pete buys it for $150. Then, Jordan shows him the gold lucky Draw figure and Pete informs Jordan that there are probably only 10-50 of those in existence and buys it on the spot for $1,050.

I particularly enjoyed this part of the show because it showed a true collector getting something new for his shelves. Rarely do we get to see a great toy collection on TV–usually we only get to see the hoarders–and seeing a museum-worthy collection is a nice treat.

Overall, another great episode of Toy Hunter, and I’m already looking forward to the next episode!