It’s no secret that I love vintage items from the 50’s and 60’s, so when a 1954 Motorola television popped up on Craigslist, I pounced on it, not knowing what I would actually do with it. The TV did not work and there was no way I would ever feel safe leaving the thing plugged in for an extended period of time. After almost a year of having to work around this immobile behemoth in my workshop, I decided to rip out the tangle of wires and tubes and mouse nests. Removing the giant vacuum tube was a scary endeavor, especially having watched videos on Youtube about how dangerous they were, but no one died, so let’s call it a success. Wires and fuses were everywhere, and the job was done. Now I had an empty television cabinet.

And another year passed.

I have seen people convert these TV consoles into bars and fish tanks by removing the front glass, but I wanted to do something a little more functional for my needs — we own a cat, and if I removed the glass, this cabinet would have just turned into a cat hangout.

The cabinet was always in rough shape, with the veneer chipping and peeling everywhere. I thought I might be able to salvage it, but once I determined that I wanted to transform the cabinet into a functioning cabinet with the whole front face as a swinging door, it became apparent that the wood sides would be too flimsy, and it would be best to just rebuild the whole thing. It was important to me to preserve as much of the original facade as possible, and after a few quick cuts, the front of the TV console was separated from the old cabinet.

I used 3/4″ birch plywood to rebuild the cabinet, using the same dimensions as the original, but slightly taller, so that the door would be able to swing freely. The sides were reinforced with 2×2’s since the door and its large piece of glass is very heavy. 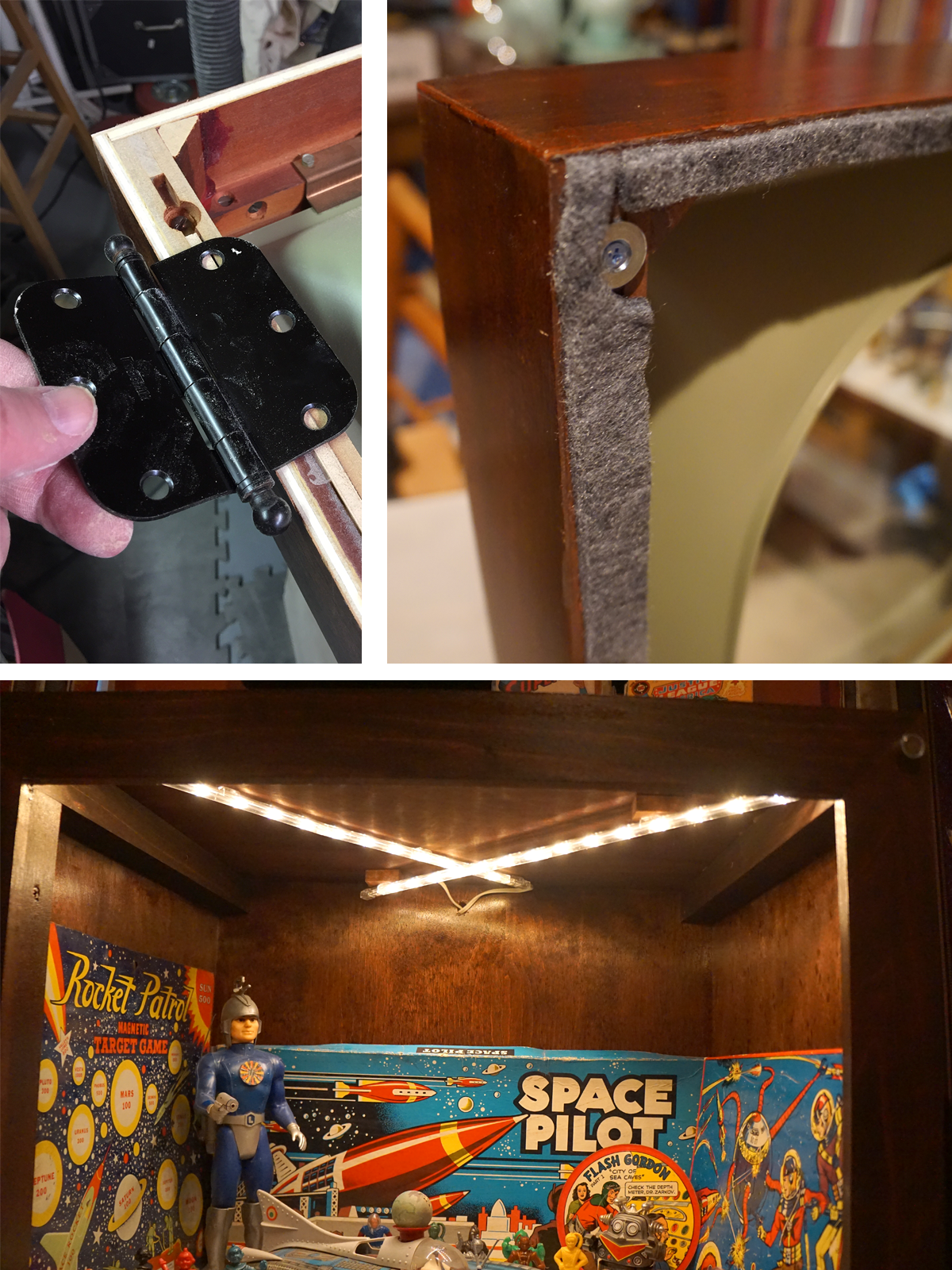 I had planned to use a piano hinge until learning that they were not designed to bear heavy loads, so I switched to door hinges, which worked great. A single neodymium magnet is used to keep the door closed, so no latch was needed. The door was lined with a thin felt strip to hide the slight crack between the door and cabinet, which keeps any light from leaking out and also cushions the door when you close it. Two LED strip lights from Ikea were installed on the top panel. The wide trim used on the front of the cabinet hides the lights completely, unless you are laying on the ground looking up. 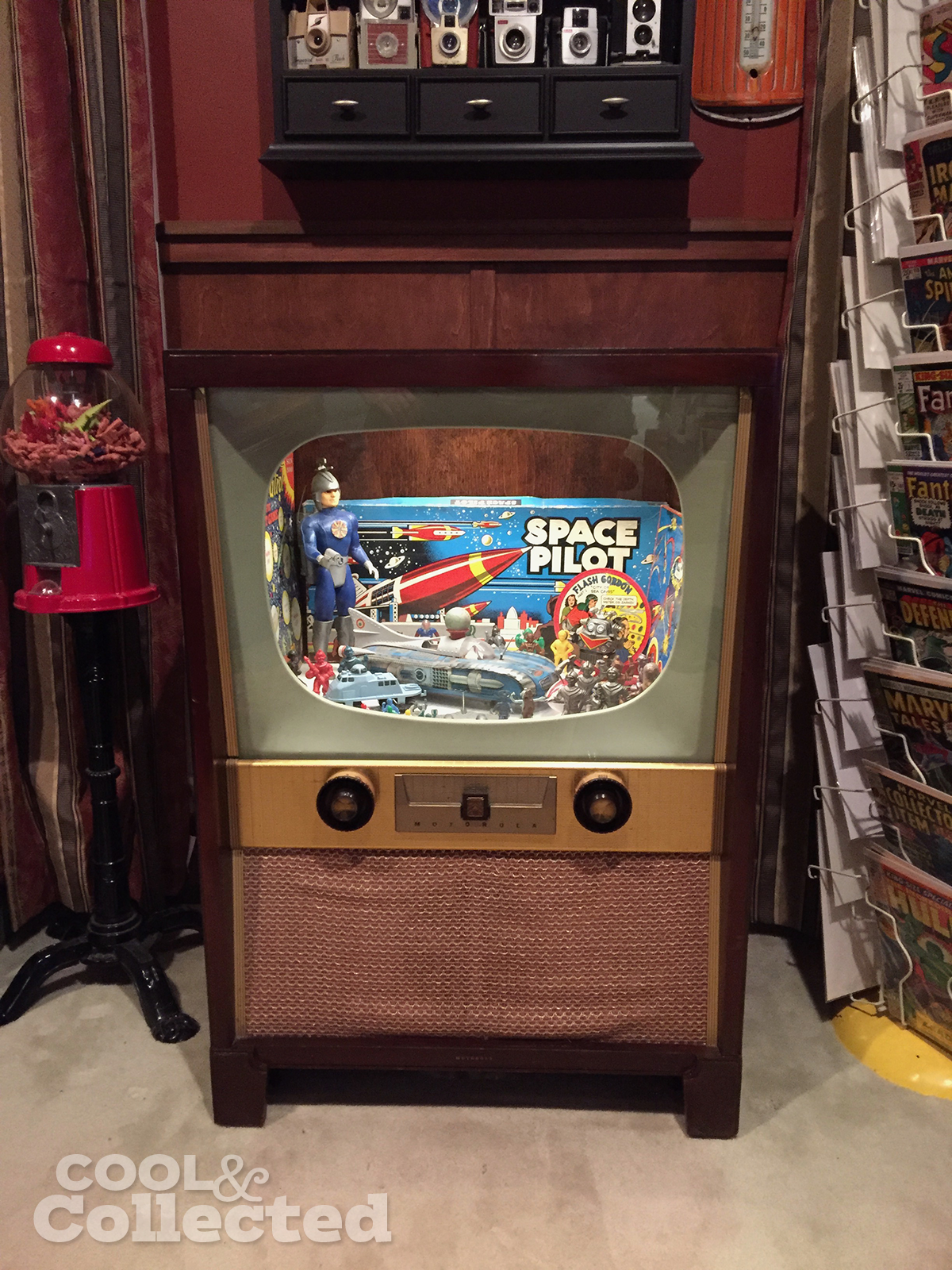 The finished cabinet is everything I hoped it would be. It looks like a well-preserved television cabinet until you look closer and realize that it opens. The lighted display cabinet is a great place to show off some prized possessions, and the fully-enclosed cabinet is 100% dust-free!

The hardest part of this project was deciding what to put on display. I opted for some 1950’s space toys that came out around the same time that the TV was produced. Before the year is out, I wouldn’t be surprised if a whole new collection finds its way in there. A Planet of the Apes diorama might look pretty darn good in there. 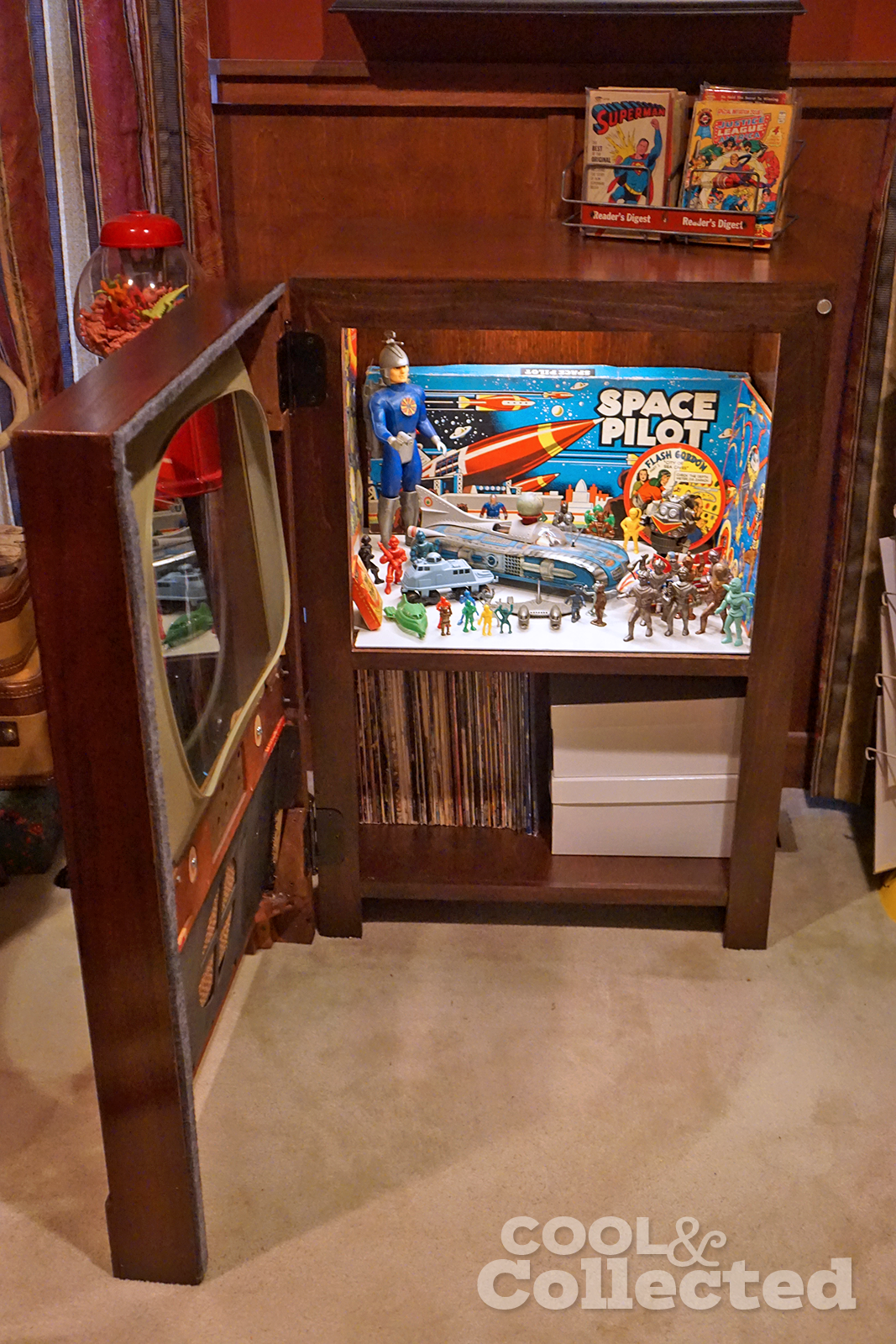 Swing open the front face to reveal the huge storage shelf below the display. 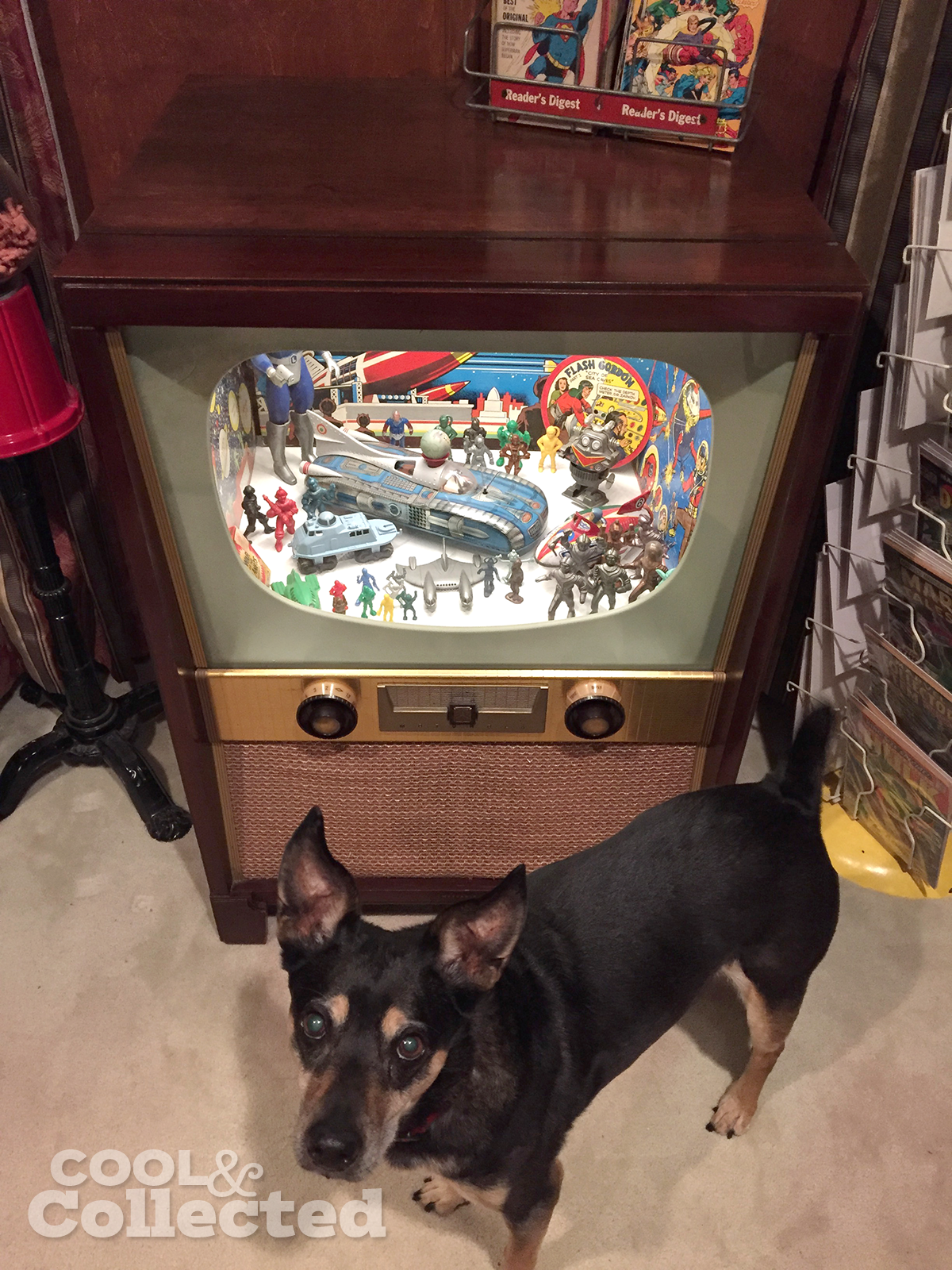 No cats here. The dog approves. 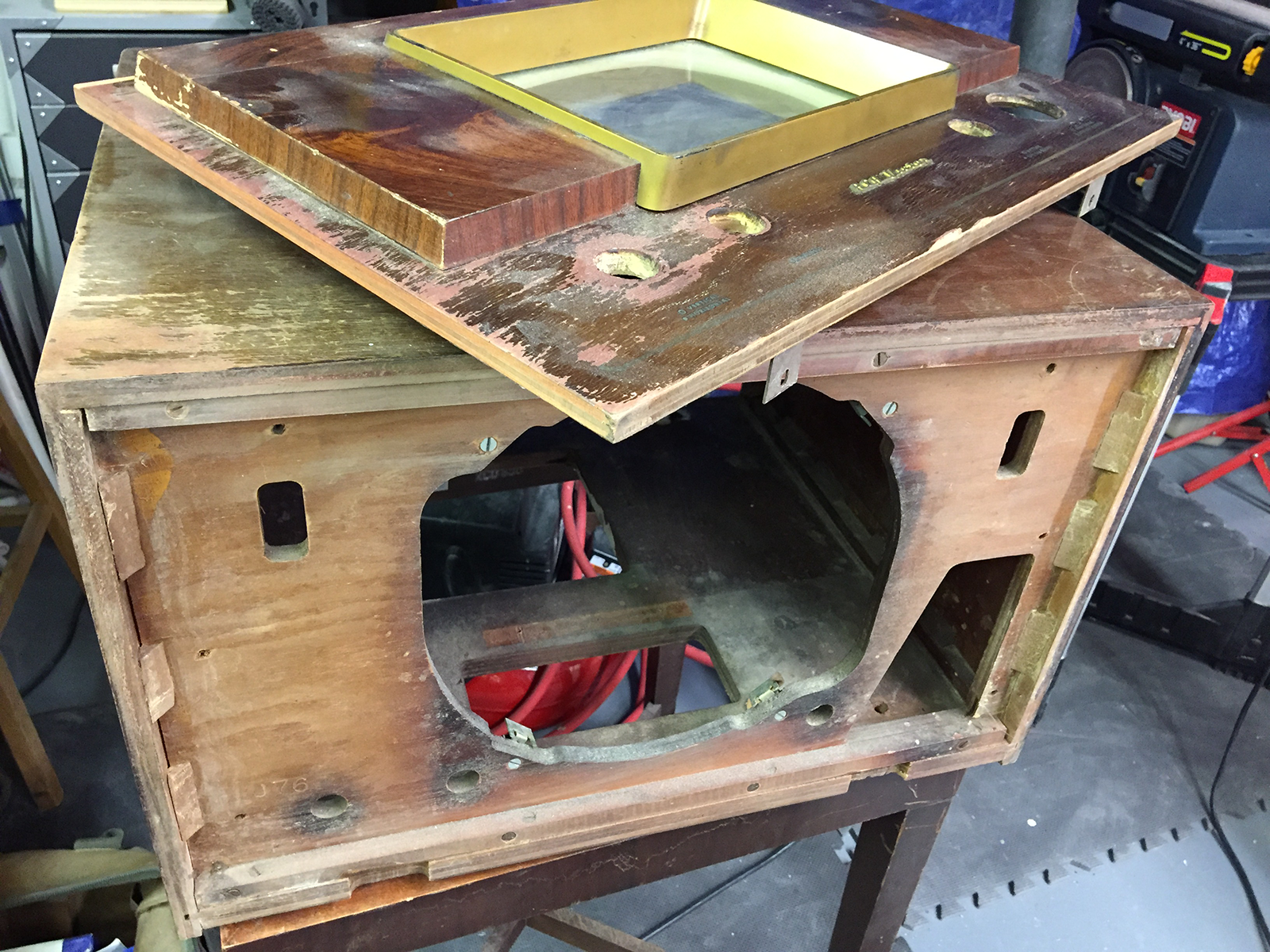 Repurposing this old TV cabinet was a lot of fun and I am super thrilled with the result. Now, it’s on to the next project, which just happens to be another TV! Stay tuned to see how that one turns out!

HELP SUPPORT THIS SITE BY VISITING EBAY VIA THE LINKS BELOW.

Leave a Reply to The Toy Box Cancel reply