Mike Bartley, a friend of Cool & Collected, wrote up this awesome recap from his visit to last weekend’s Steel City Con. 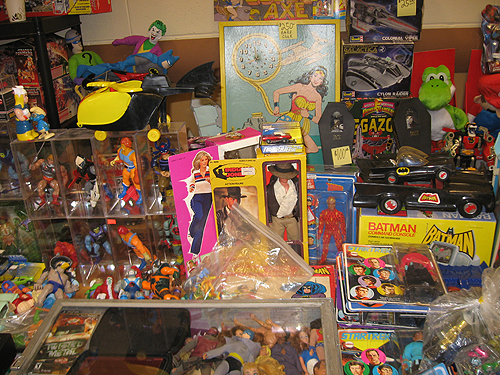 This past weekend was the event that my family and I (my wife may not fully agree with this, but for the article, let’s say she’s on board) feel is the start of the holiday season. It’s the December edition of the STEEL CITY CON. This is a comics, toys, and collectibles convention that takes place just outside of Pittsburgh, PA. Brian has been cool enough to let me write up a few posts in the past describing all the goings on of past editions of this con, and so here is another one.

This time, my wife and two daughters made the 300 or so mile drive from Philly to Pittsburgh on the day before I attended the con, so I could enjoy some of the town with them. Usually, we leave early the day I attend, and she and the kids see the sights and sounds of Pittsburgh, while I get dropped off and enjoy the sights and smells of the STEEL CITY CON. So, we got to go to a chocolate factory, shop, and have dinner together as a family — a much better idea than trying to cram everything in an evening after walking around a concrete convention floor all day. But enough about my stuff, on to the con description: 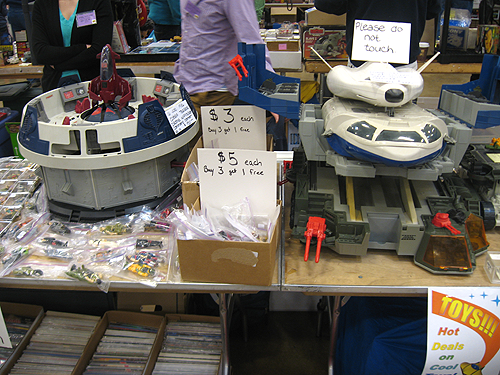 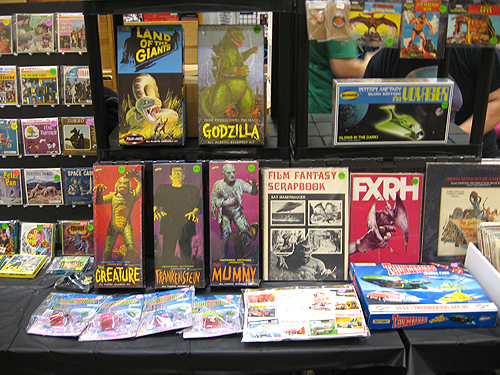 In prior years I was able to listen in on some of the convention vendors complain about poor attendance and low sales, but I saw none of that this time around. This was the most crowded it has ever been since I started coming to the show 4 years ago. 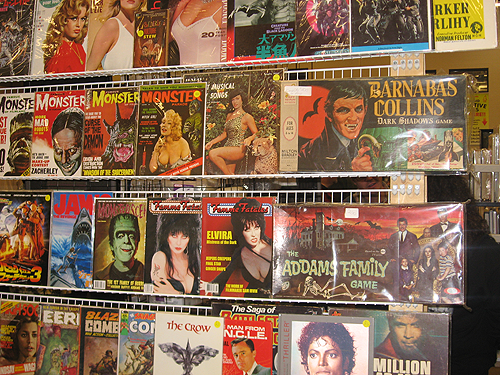 Every row and table space was sold and the artist area was full of people selling sketches, prints, and all other kinds of geek related masterpieces. I love checking out all the cool stuff people have to sell and this year being so well attended, I didn’t have to fear making eye contact with the sometimes lonely artists. Having them tell me all about their vision behind their demonic MY LITTLE PONY magnets and zombified Disney characters can really be a hindrance to checking out the tub of potential action figure fodder I see two tables down the line. 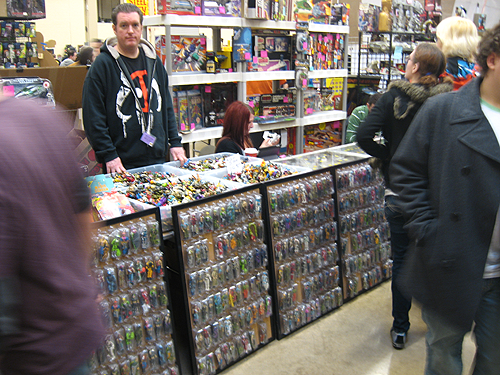 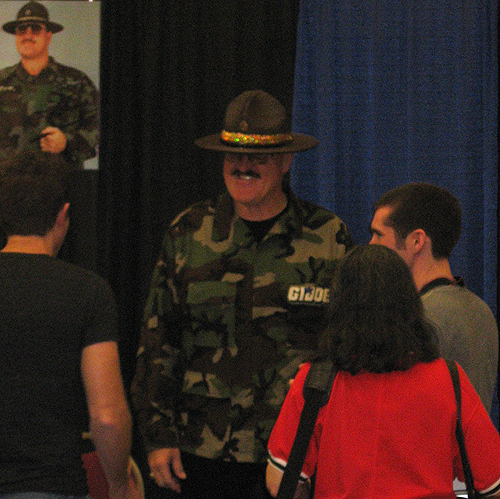 The guests at this con were very popular with the autograph crowd. The biggest line was for Cassandra Peterson, otherwise know as Elvira, Mistress of the Dark. She wasn’t wearing her trademark wig and boob dress, but she was still very attractive and her fans seemed to love her. Other guests included Richard Hatch and Dirk Benedict from BATTLESTAR GALACTICA. Starbuck’s line was much bigger than Apollo’s every time I went by, which just proves that Richard Hatch should have agreed to having that action figure made all those years ago. Dwight Schultz, from THE A-TEAM and STTNG was supposed to attend with Face, but his flight along from Los Angeles was supposedly cancelled. Louis Gossett Jr., was also supposed to be in attendance, but his flight was cancelled too. WWF sometimes hero and sometimes heel, Seargent Slaughter was also a popular figure at the show. Peter Mayhew was in attendance, but sat in a wheelchair the whole time. Great to see Chewbacca in person again, as he has been a major con star since I was a kid. Sad to see his health seems to be declining though. 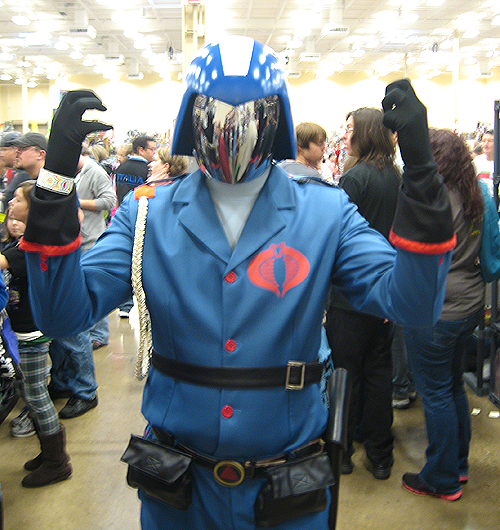 Cosplay was in full force at this edition of the con. Each year the costumers make an appearance, but this year the quality of the suits was much improved over prior cons. 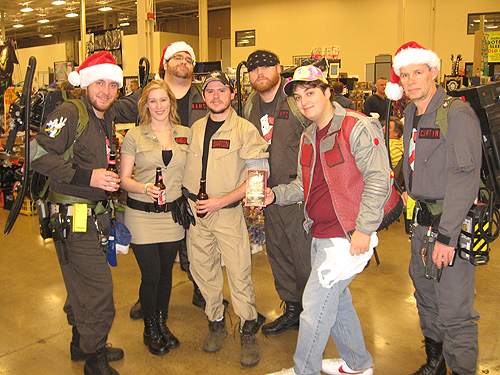 The STEEL CITY GHOSTBUSTERS were in attendance again, as well as member of the local 501st legion. Families attended in costume this year too, as I saw a grand mother dressed as Catwoman, a mom dressed as a corpse bride, and her son in full Bane attire. Some groups got another day out of their bagged Halloween costumes and other went all out with tailored outfits that rival the bigger cons. 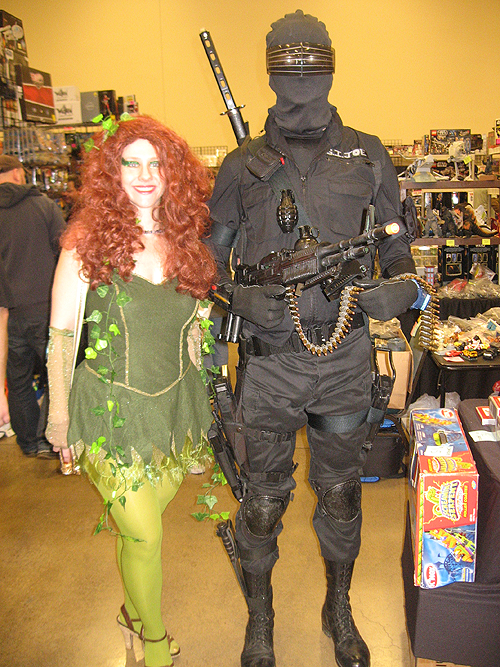 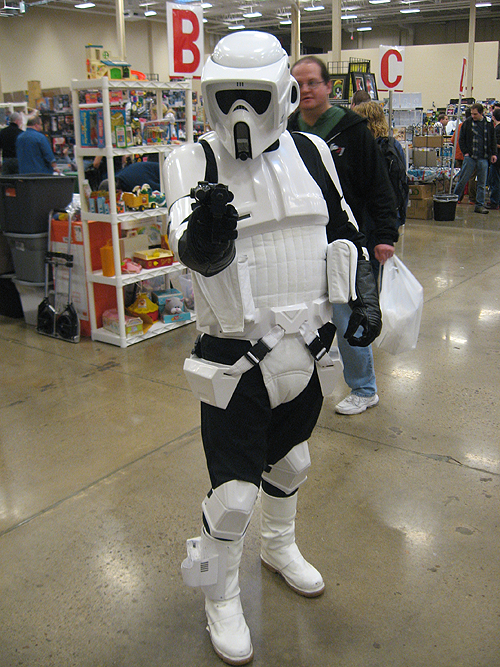 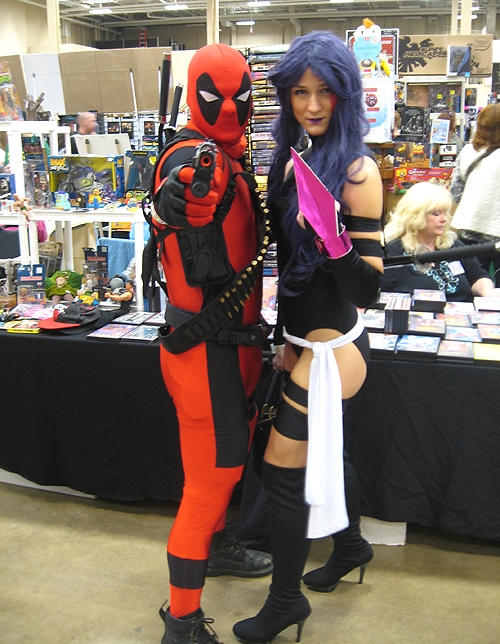 With the larger crowds can come the higher prices, as I saw a little bit of this time around. The price of admission to this show is still really cheap ($12 but will be raised to $15 for the next one in April), so I can blow my money on figures and not on the door. I found a ton of good figures and collectibles from some of the reliable dealers who come to each show. Most tables are actually selling items at reasonable prices without the convention gouge that feels like buying food at an airport. This show has a mix of larger dealers and small personal collection vendors, so flea market deals can be had. Every seller I dealt with was able to haggle prices with me — not something I have seen at the bigger shows in Philly and NY. This is one of the reasons I come back to this show each year. That and my wife says I can.