In the first post I wrote about the Space Toys auction put on by Old Town Auctions, I showed you plenty of great stuff, but now I’m going to show you some really great stuff. I’ll let the photos do most of the talking, but I also have to say that this is just a small sample of what was up for bid. For example, there was also a 7′ long USS Flagg GI Joe aircraft carrier, a huge selection of vintage wind-up tanks, and a number of Mego figures. 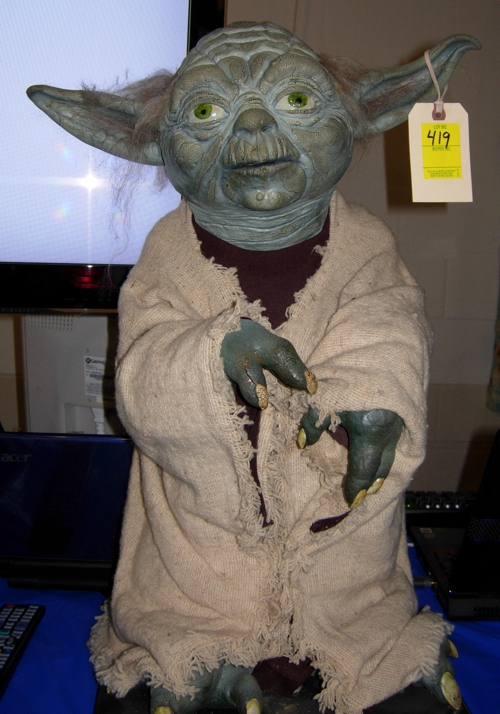 Here’s a life sized Yoda figure that would have looked great in my living room, but much to my wife’s delight the final price was $300 — well over my bid. 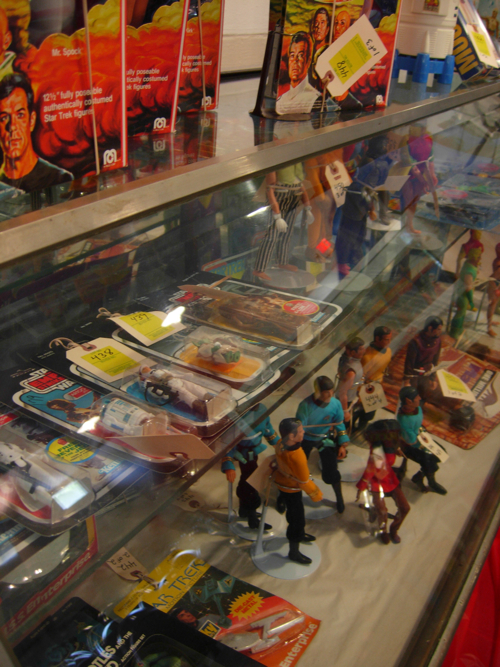 There were vintage Star Wars and Star Trek figures and vehicles. 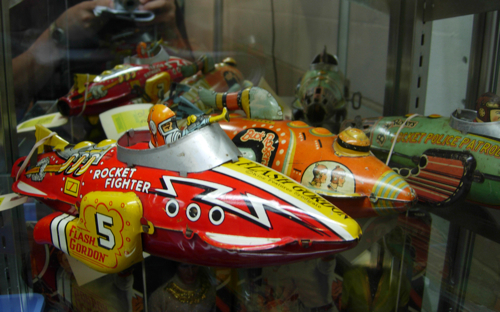 I have added these beauties to my mental list of “holy grails.” The Flash Gordon ship sold for $300, the Buck Rogers one went for $250, both to internet bidders. The Buck Rogers Rocket Police Patrol ship sold for $130 due to the fact that it was in less than perfect condition. 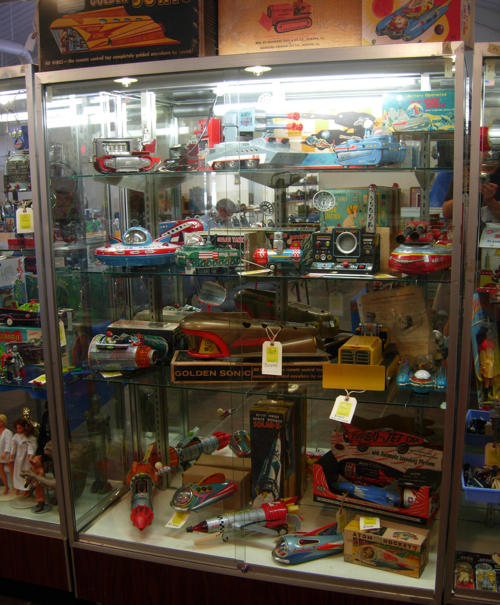 The auction staff had to continually mop the floor in front of the display cases due to all the heavy drooling. Each of these ships went for over $100 with some taking in much more. 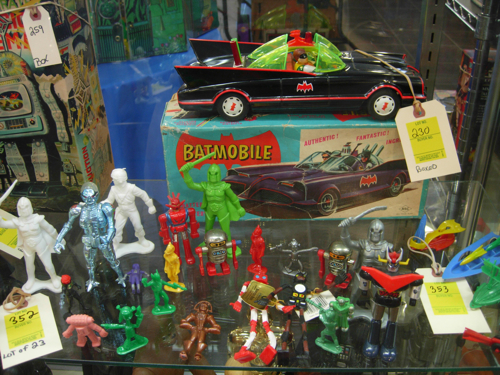 If there was one item at this auction I wanted more than any other, it was this Batmobile. Of course, the opening bid was higher than what I would ever spend, and some schmuck on the internet got it for $400. I am not a fan of internet bidders, even if they can’t bid live. 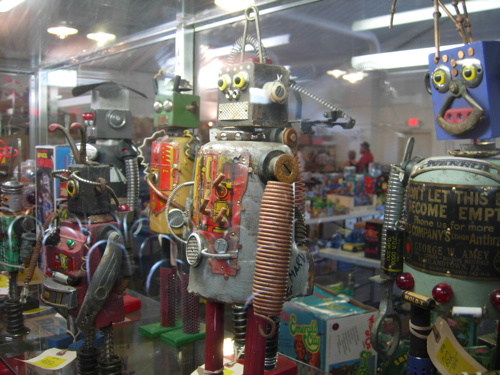 There were about a half a dozen of these excellent folk art robots by Kent Greenbaum. They didn’t bring in a whole lot of money, with the most expensive one selling for $130, and I regret not picking up at least one of these guys. I think these were the only true “steals” of the day. 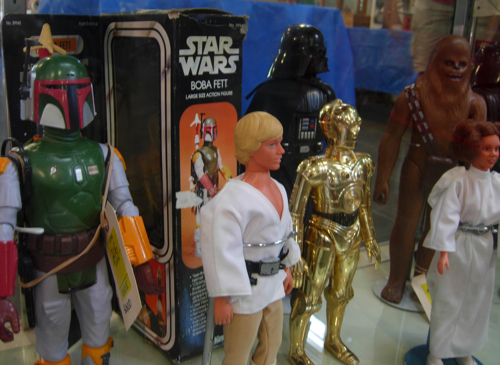 There were quite a few of these Kenner 12″ Star Wars figures. The Bob Fett with the box sold for $200. 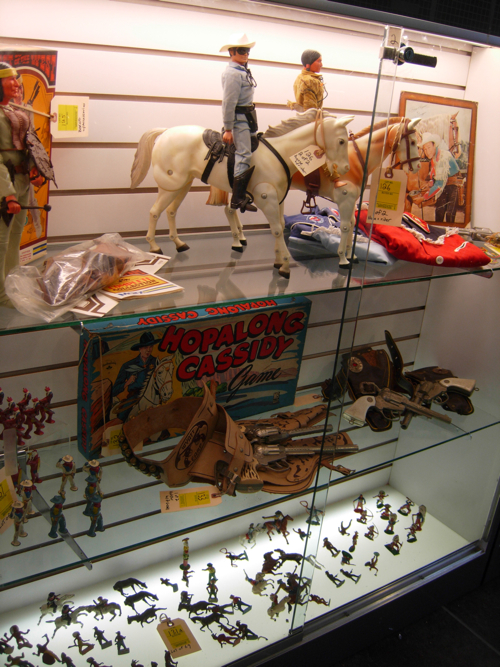 I love a good western, and I love western memorabilia even more. The Gabriel Lone Ranger and Tonto sold for just $80, a pretty good deal. The Hopalong Cassidy board game went for $40, despite my best efforts. 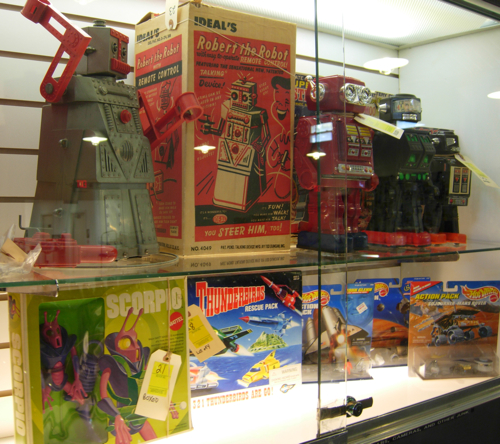 Here are some more great robots, and that Scorpio figure from the Matt Mason line went for a bundle (I think it was $300, but my notes got chewed up). 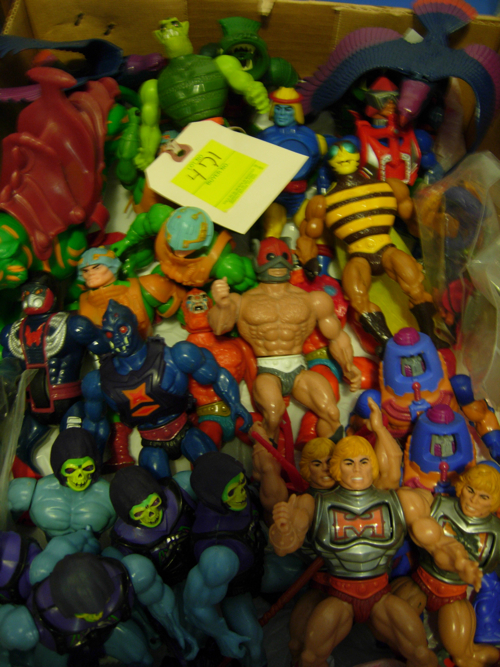 There were a couple of Masters of the Universe lots and they went for some crazy money in my opinion. I don’t know a whole lot about the value of these guys, but I am going to go do some serious research. One lot of 41 figures sold for $325, and the carded figures sold for $80-170 each.

One of the reasons I love going to live auctions is that I always learn something new and meet fun people with interesting stories, and this auction was no exception. If you’ve never been to an auction, I can’t recommend it highly enough.