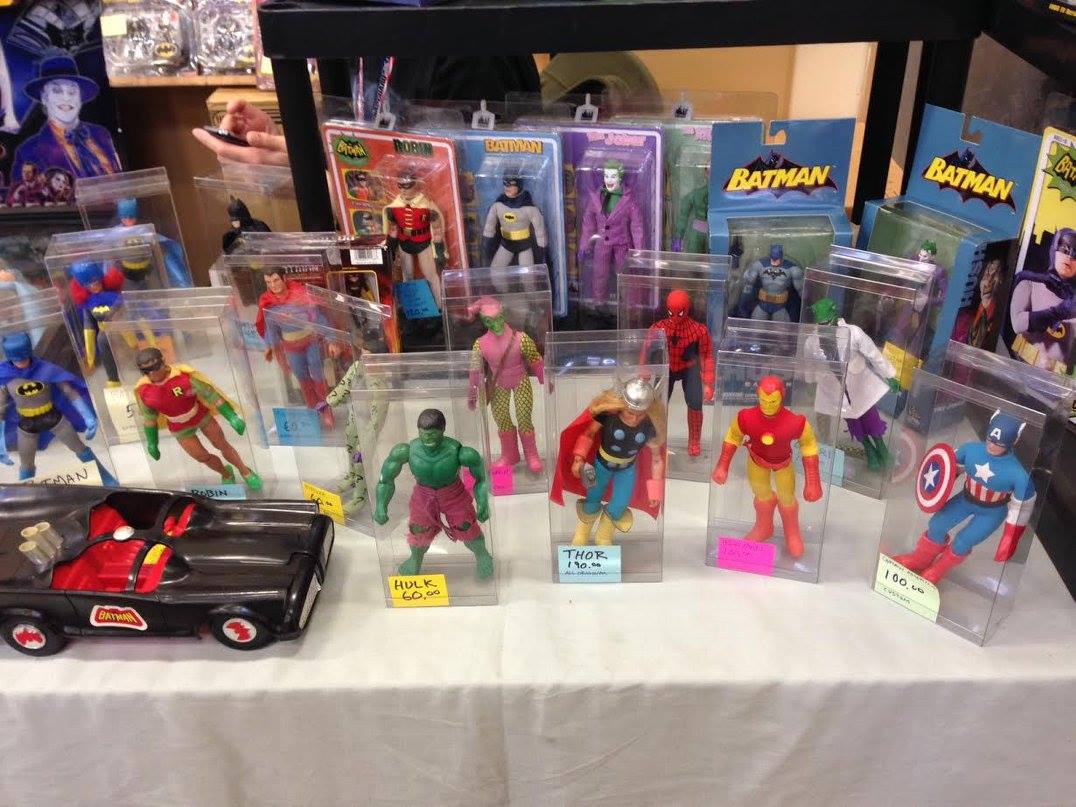 Once again, Mike Bartley, a friend of Cool & Collected, wrote up an awesome recap of his visit to Pittsburgh’s Steel City Con.

It’s that time of year again. When the icy grip of winter relents and allows access through the mountainous passes that separate Philadelphia from Pittsburgh, PA. I attended the April 2015 Steel City Comic Con in Monroeville, PA (a Pitt suburb) and had another great time. This year I learned alot and made some mistakes that won’t be repeated. 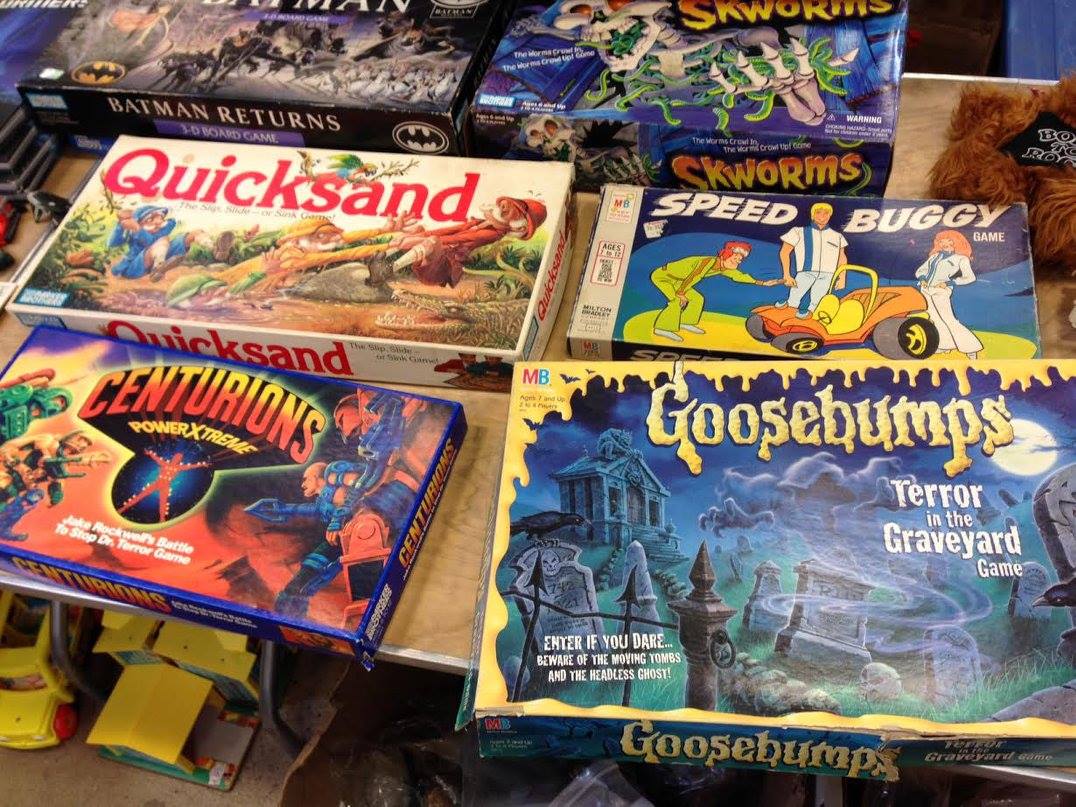 Last time I attended this show, I went at my normal time, a little after noon on the Saturday of the show. Usually, I wait maybe two or three minutes in line to buy my daily ticket, but the last time was the first show with the much larger space and the addition of events and contests. Outside in line, I must have spent over 45 minutes waiting. This can either be a fun experience or one that drives you out of fandom for good. I was lucky, in that I was able to people watch and enjoy most of my line time — when I say enjoy, I mean tolerate. During that wait, I determined that the three day pass was going to be the way to go for the next con visit. 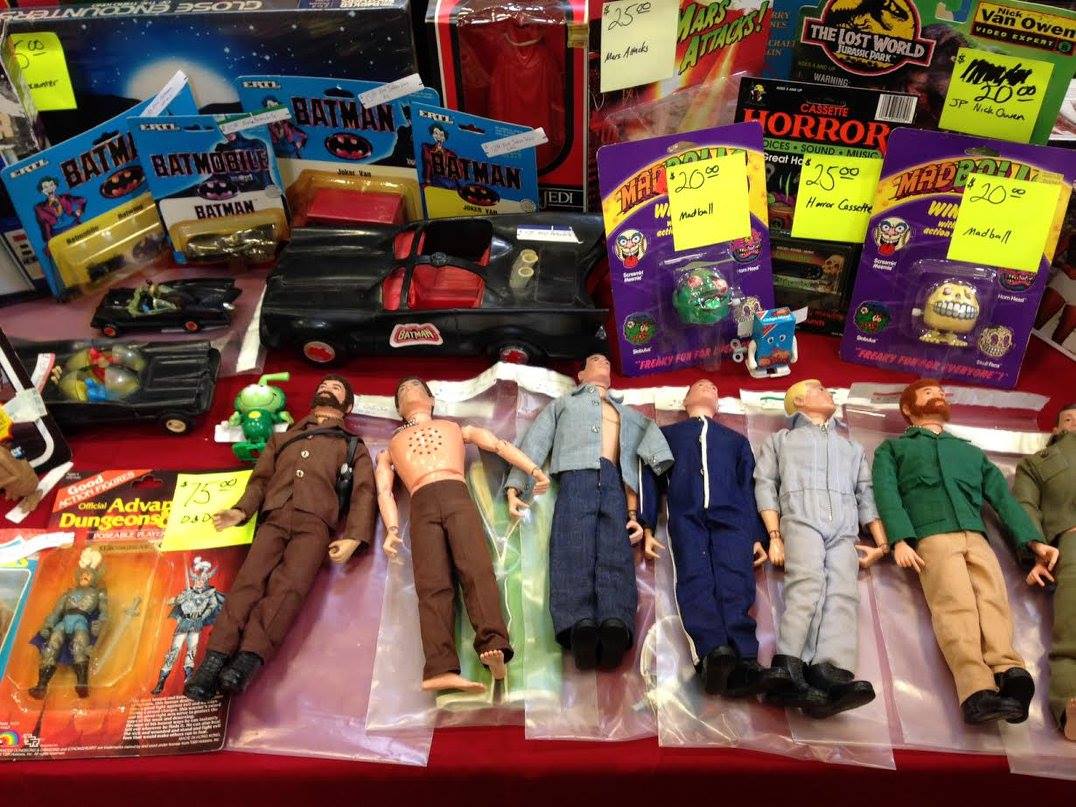 So, when the tickets went on sale for this past weekend’s show, I jumped at my chance to get the three day pass early buyer discount. As the show’s ticket prices seem to go up with each new event, I pondered whether the extra $10 was worth it. Flashback to last year, and I knew the pass was the way to go. Visions of WAYNE’S WORLD 2 and the backstage pass scenes passed through my mind, and I began to get excited for all the extras the three days would bring me. All those dopes standing in the long, hot lines were gonna feel real bad as I strolled right by through the VIP ropes… 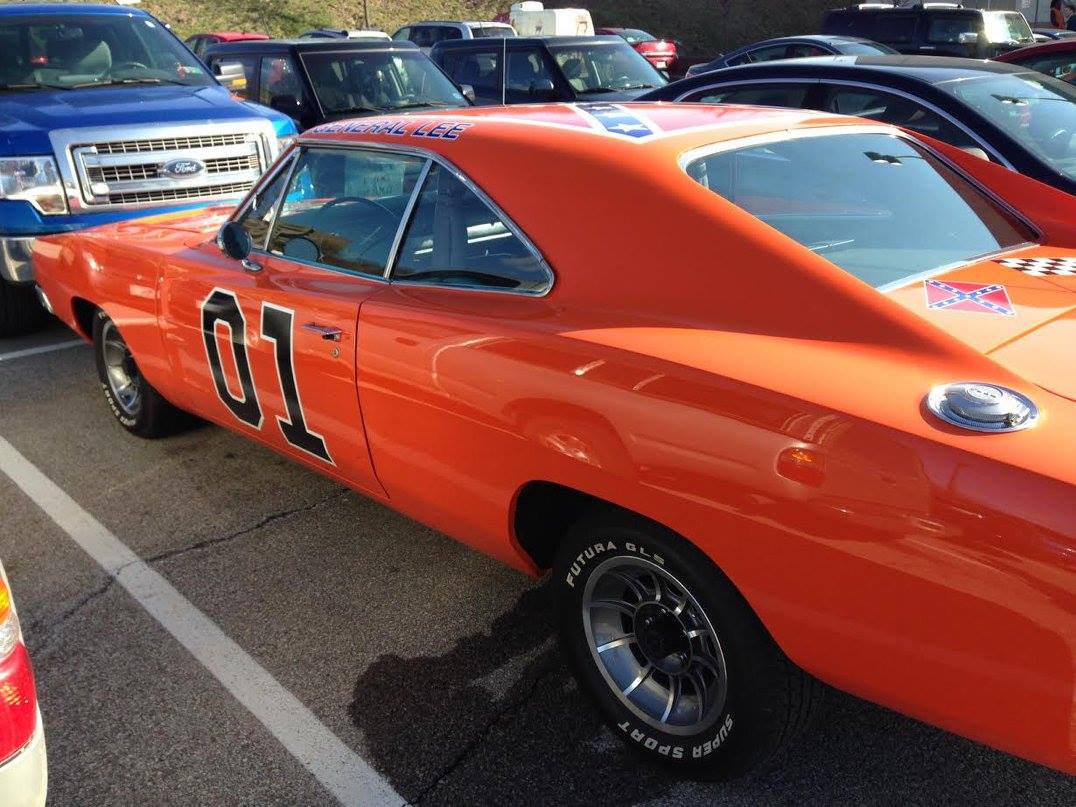 The weekend started with an early send off to make it the 300 miles to the show. With sleepy kids in tow and a wife doing the first part of the drive, I was psyched. We made it with only one rest stop and got to the show Friday morning around lunch time to get my pass. The website where I bought the pass made it clear to print your receipt so you could prove you were the rightful holder of the blessed pass. I was nervous my hastily reprinted email receipt wouldn’t gain me access, but little did I have to worry. The two ladies at the ticket booth could barely be bothered to even look up at my face or read my receipt, let alone ask for ID.  They slapped the bracelet on my wrist and went about their conversation with barely a glance. I asked where were the laminated badges of earlier cons, and they mumbled something about “we don’t do them no more”….bummer. 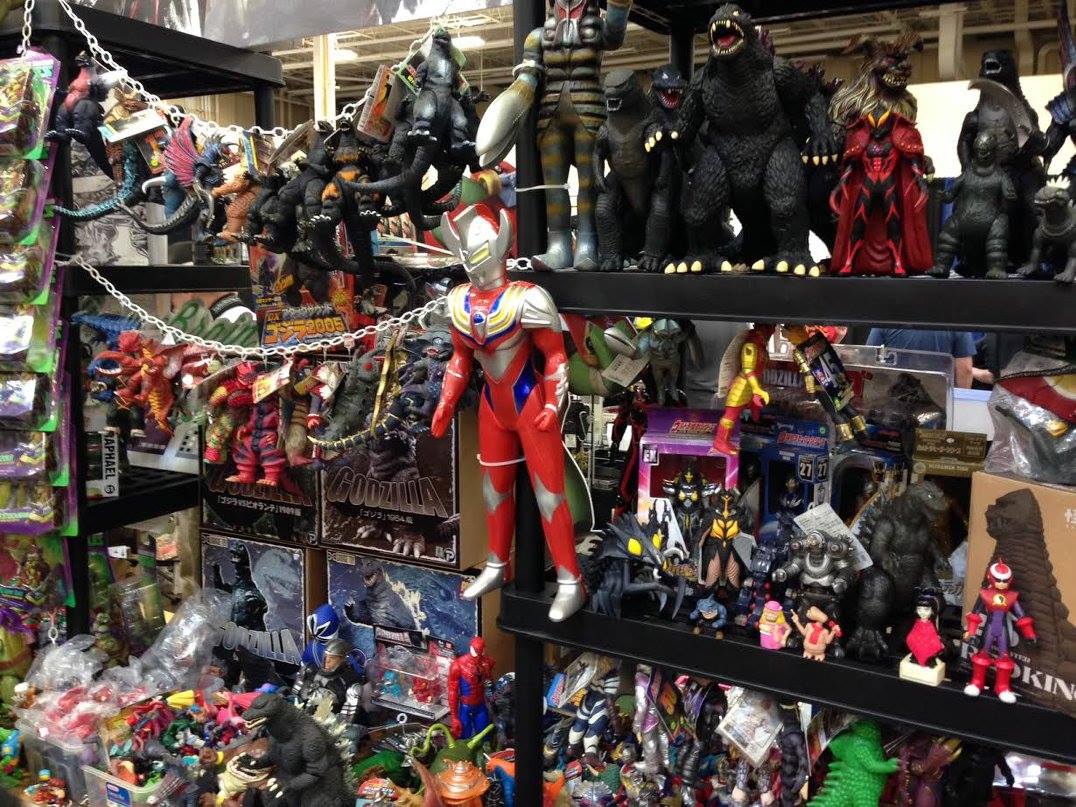 With a dayglo bracelet on my wrist, I spent the rest of the day with my family enjoying the sights of the surrounding Burgh. All the while nervous that I would damage or lose my precious three day pass. Not to worry as it made it through the figure skating and shopping unscathed. Day one of my three day VIPness ended without even attending the con.

Saturday began and, with a giant cup of coffee from SHEETZ in hand, I left for the con. I was giddy with excitement as I pictured myself amongst the huddled masses outside the show chomping at the bit to gain entrance. I was going to the head of the line..ha ha. First mistake.

When my wife dropped me off for the show, it was a bit earlier than prior years. The day was also warm and sunny (rare for Pittsburgh).  No one was in line for tickets.  I entered the venue with dayglo wrist uncovered to show security my VIP status and was greeted with a kindly 40-something lady handing out fliers for the next show. Where were the burly bodyguards that I would need to muscle by? Oh well, at least my three day pass gains me front row access to all the question and answer sessions form the guest stars. Know how many of those I went to..? None. 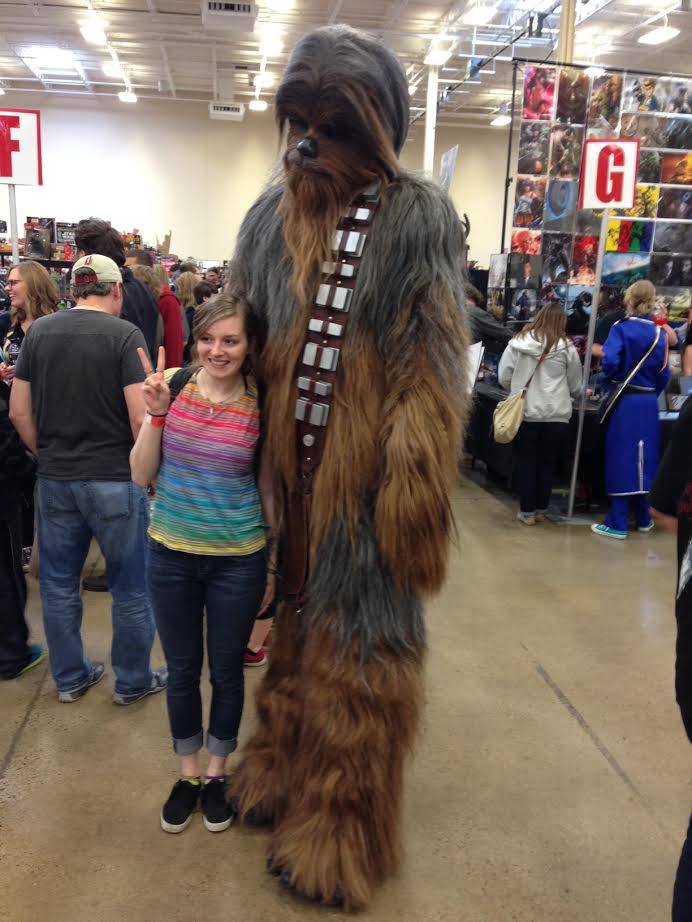 I have recently been moving away from toy collecting and drifting into more artistic pursuits. Resurrecting my long-ignored illustration  hobby and my burgeoning prop/costume building interests. I spent a ton of time checking out the cosplays and artist booths. While a ton of booths were selling the same prints, there were a few individual artists that I kept going back to visit. James O’Barr, creator of THE CROW was selling prints and doing commissions. My daughter’s favorite, Heather V. Kreiter, creator My Little Demons (demonic/fantasy versions of MY LITTLE PONIES) was also there displaying her work. Check her out to see some real cool stuff http://www.shamansoulstudios.com/. So much talent in one place can be a bit intimidating, but also inspiring. 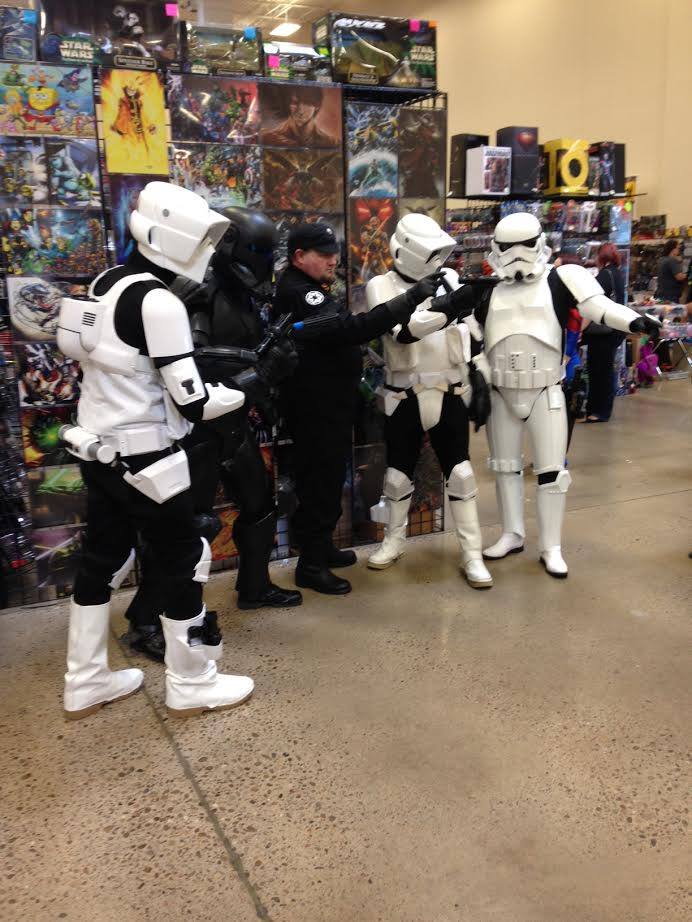 Cosplay was again in full force. I took a bunch of pics to show my kids, as they love seeing their favorite heroes and characters in live action. Though not in cosplay myself, I don’t really deserve to comment, but I will, as I had a three day pass remember… Cosplay is for fun, and can be taken to great heights of artistic talent. Then there are those who think that the costume they bought three Halloweens ago that barely still fits is just as good. NOT TRUE. The real artists far outshined the people who made a joke out of the occasion. 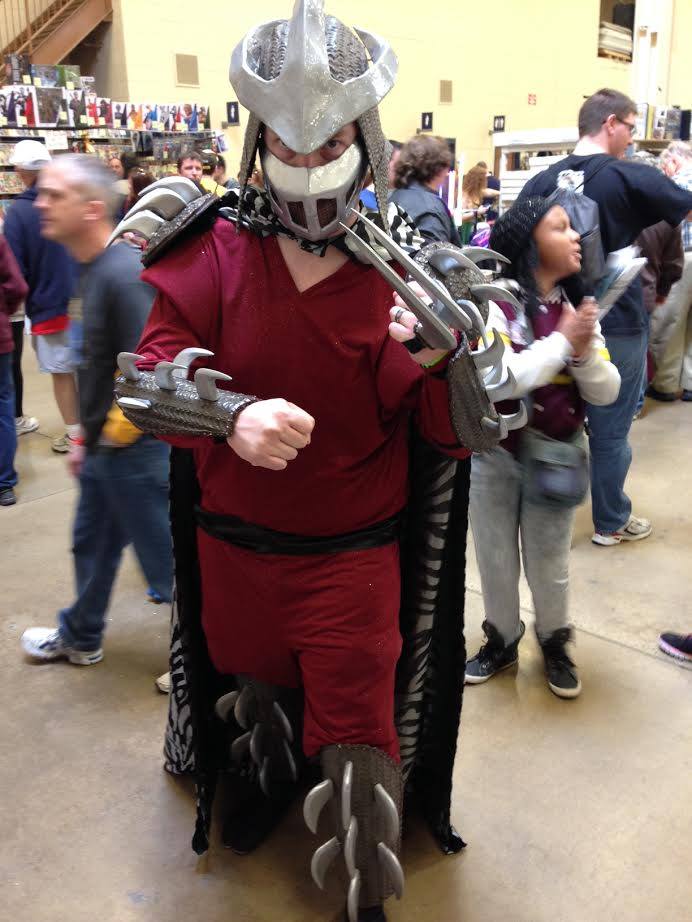 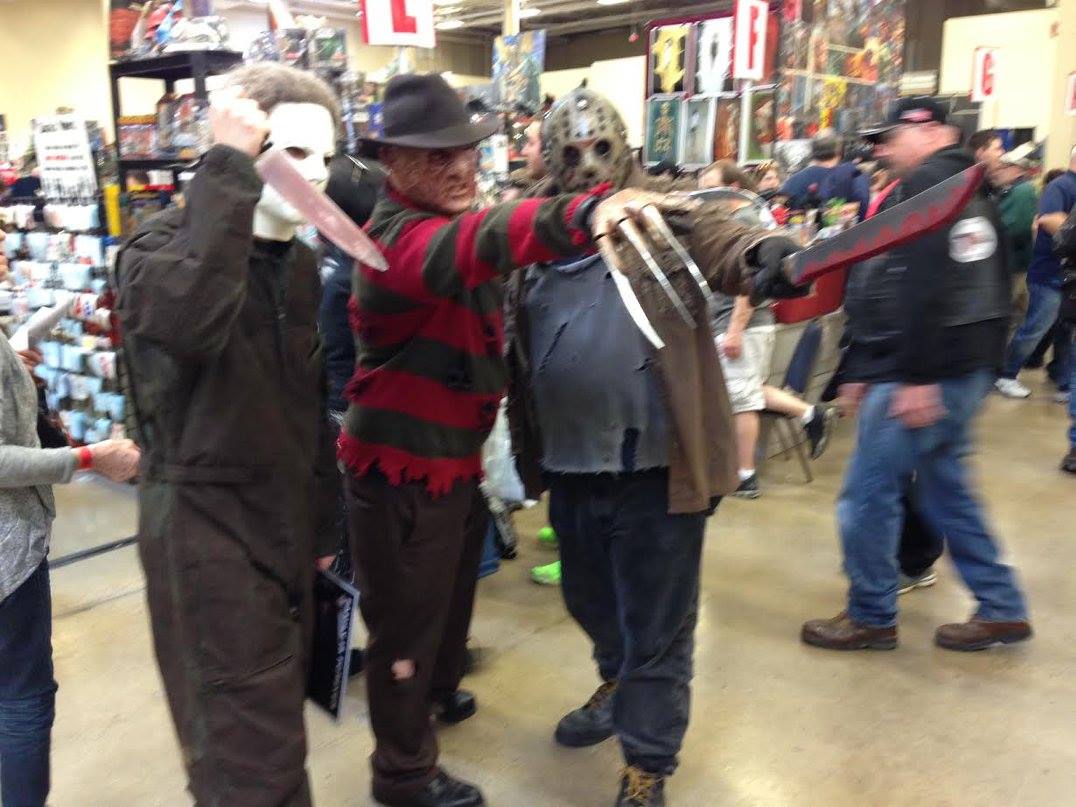 Now back to the reason most people attend the show, the toys, comics, and collectibles. The show floor is filled with vendors along with the ever present gutter guard salesman and home renovators who must always get a table at every show the venue holds. Toys ranged from vintage to the over-priced MARVEL LEGENDS of today. I took a bunch of pics of my childhood favs and others I know readers of this site would enjoy. Lego and Funko were all over the place. I collect neither, but love the fact that they hold so many licenses. Prices for those items were usually at retail and avoided the con mark up.  I am a toy scavenger and a some-time customizer, so I went looking for the deals and steals (soon to be a show starring my daughter and I on YouTube..maybe). My finds were varied, from a Mego Fonzie to an Evel Knievel doll. I scored many dollar figures too (MIB, Super Powers, Remco WarLord, POP) for my kids and I to work with. 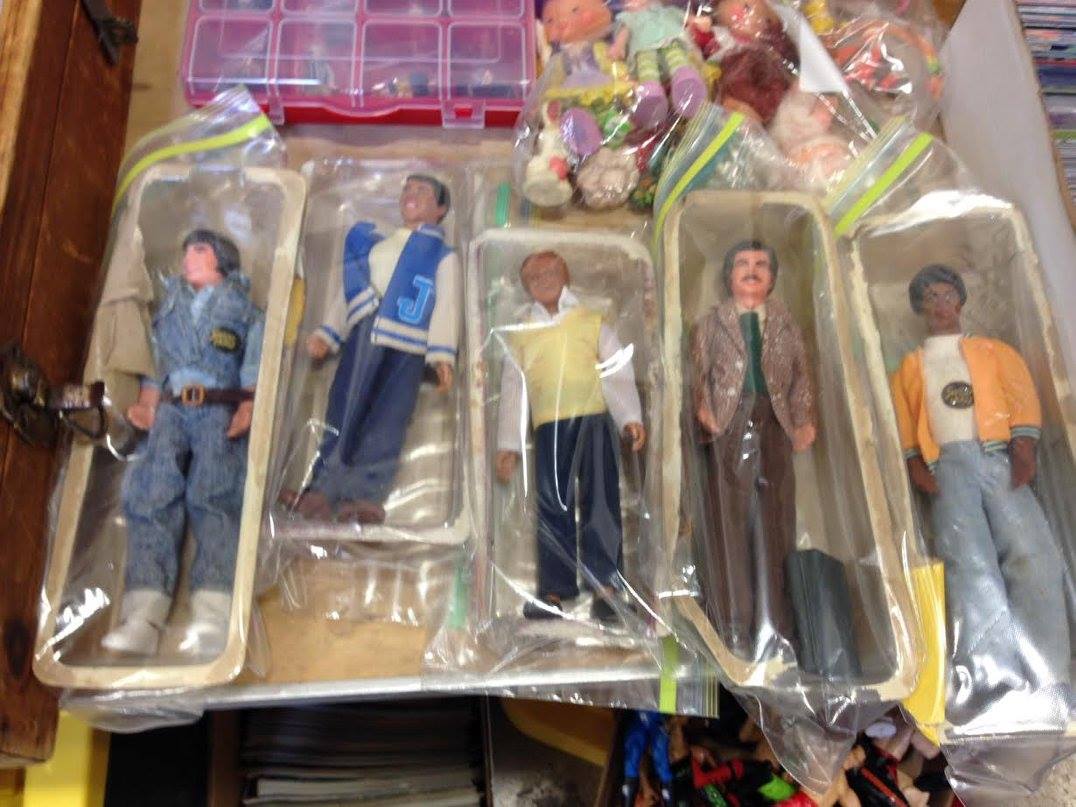 Saturday wound down and I finally made the rounds over to the autograph area. The lines were encouragingly long for most of the guests http://www.steelcitycon.com/celebrities/. I hate to walk by an actor/actress sitting there sad eyed, while no one buys their signature or picture. Luckily, the Pitt crowds seems to be into all the guests. The star attractions for me were the Dukes of Hazzard themselves. John Schneider and Tom Wopat had lines that stretched around the show floor. They both looked great and ready to evade whoever gets the new Sheriff job in Hazzard county (RIP James Best).  Noah Wyle was the other big guest, but I never got to the area when the line was short enough to snap a fuzzy iphone pic. 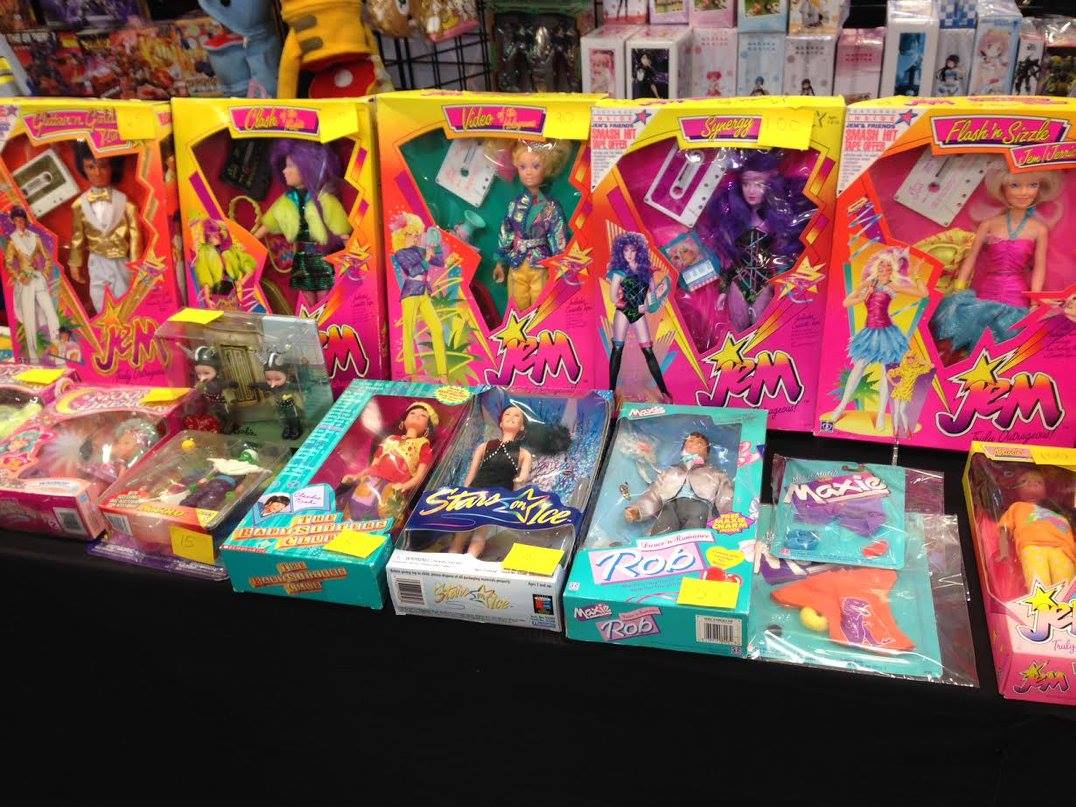 Before I knew it my phone was ringing and the family wanted to know if I was done at the show. They wanted to go to dinner and swim at the hotel pool after that. No worries, I thought as I had the three day pass and would return the next day for the last day of show deals. Mistake number 2. 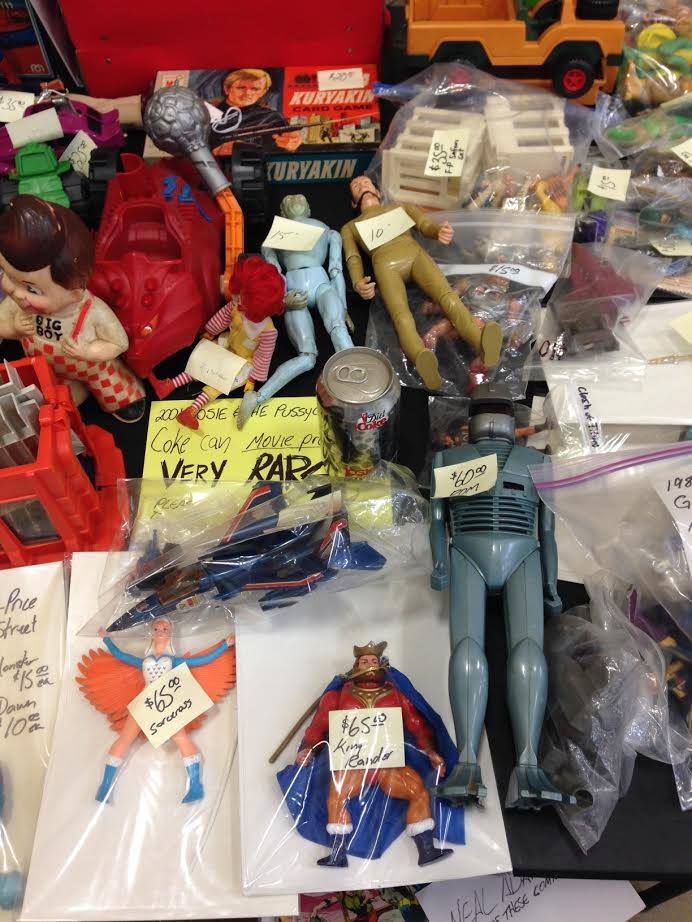 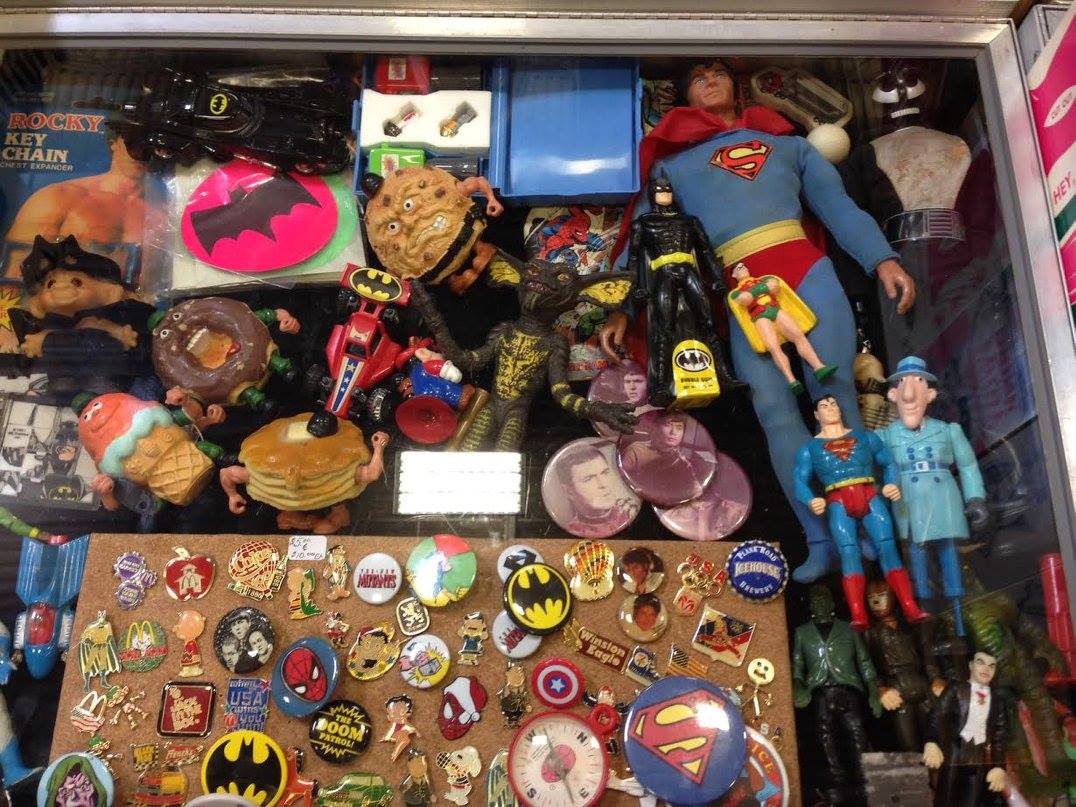 At dinner, I told my oldest daughter about the show and that her favorite artist was in the alley. Last year, I was able to sneak her into the show just before closing and she wanted to try and pull off that caper again.  So, hand in hand we tried to gain access to the show again as it was winding down. The security that was lacking when I entered earlier that day seemed to have been beefed up for the night crowd. I gained access easily with my dayglo pass, but they stopped my daughter. She was asked to show her wristband. Shockingly, my three day pass did not guarantee her access as well. She pulled up her sleeve to reveal no wristband. Our improv skills kicked in at that moment. “Where’s your wristband? Don’t tell me you cut it off already?” I asked exasperatedly. Without missing a beat my daughter blamed it on her little sister, just like always. The staff seemed more annoyed with having to deal with an angry parent than a person sneaking into the show, so they let us pass, with the caveat that we were just going in to get something and would be just a minute.  A half hour and over $50 later, we left with a demon pony for her, a Barbie for her little sister, and a NECA Snake Plissken for me. Money I hadn’t planned on spending but I got caught up in the moment. 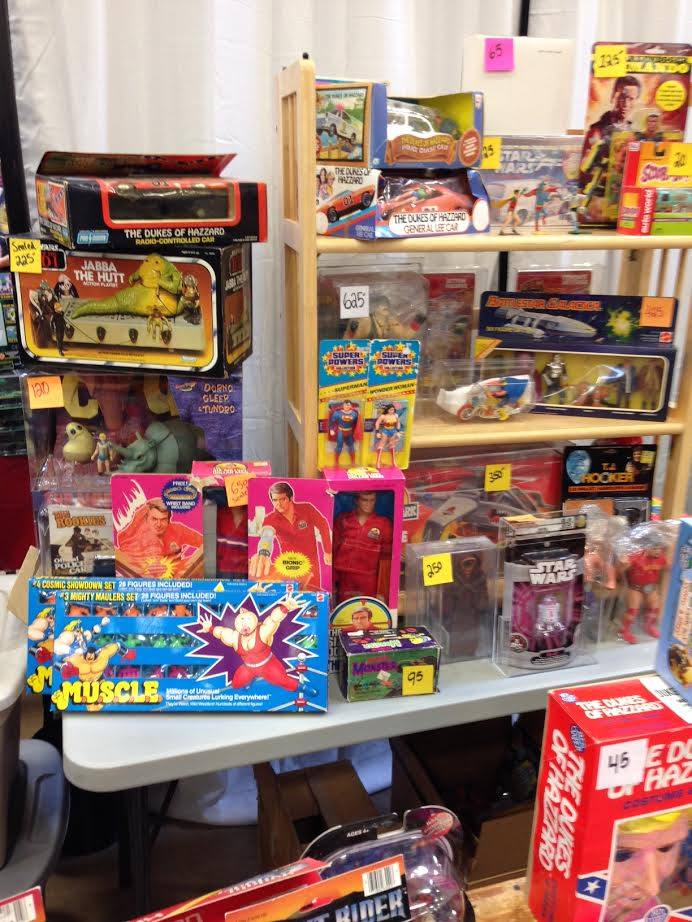 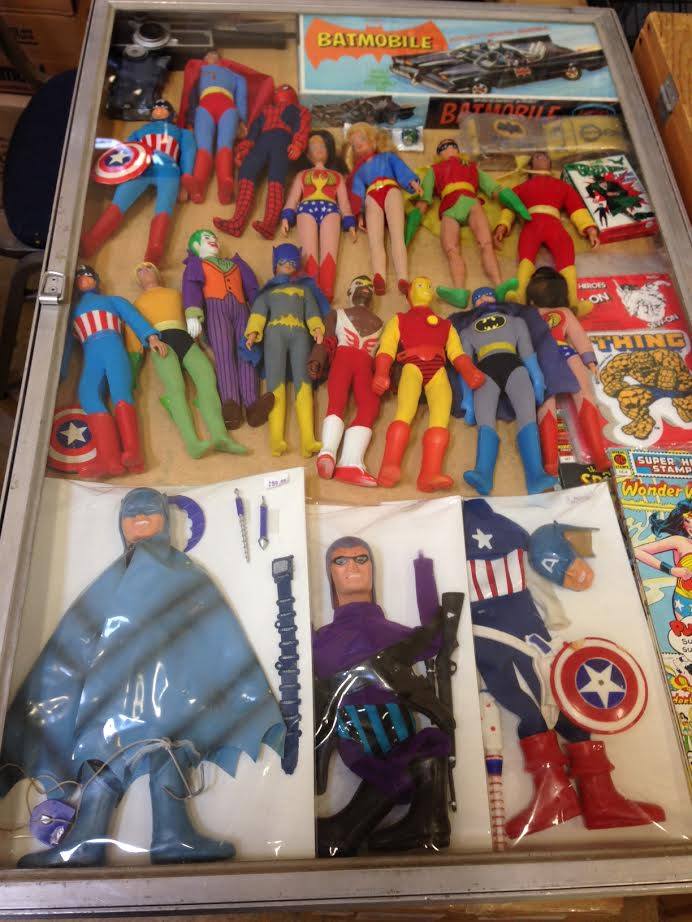 Sunday, the final day of the show, or what I was always led to believe: DEAL DAY. My wife wanted to get an early start on heading home but found out that the local fabric dealer was having a big sale. I was able to attend the show again for another day. Making my three day pass almost worth it. I knew my time was limited so I went aisle to aisle looking for deals. Sadly I found very little. I must have been there way too early in the day to get the dealers who don’t want to take it with them.  A couple of random dollar figures and many rejected low ball offers later and I left the show. 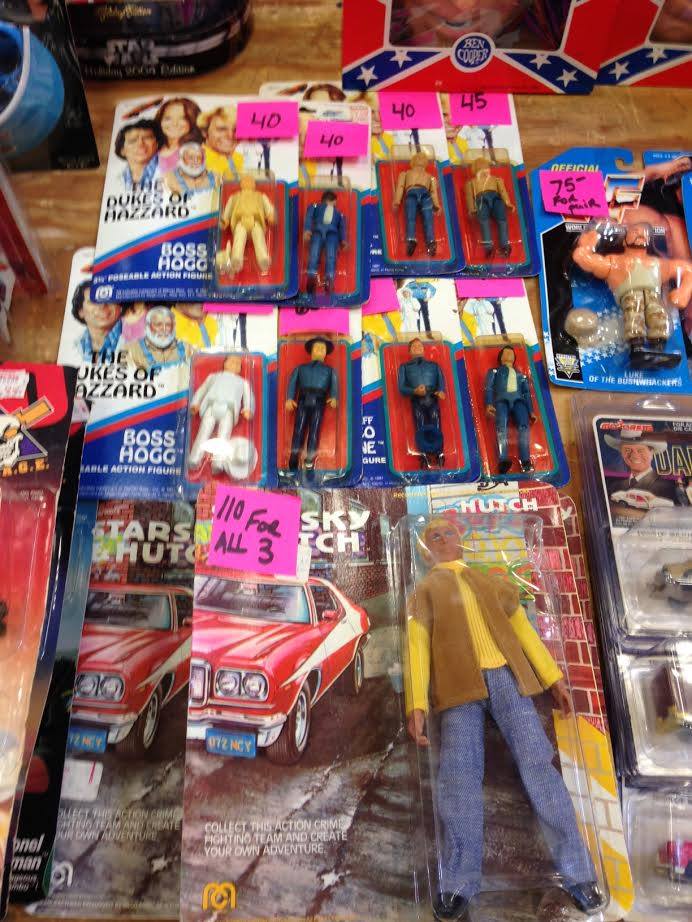 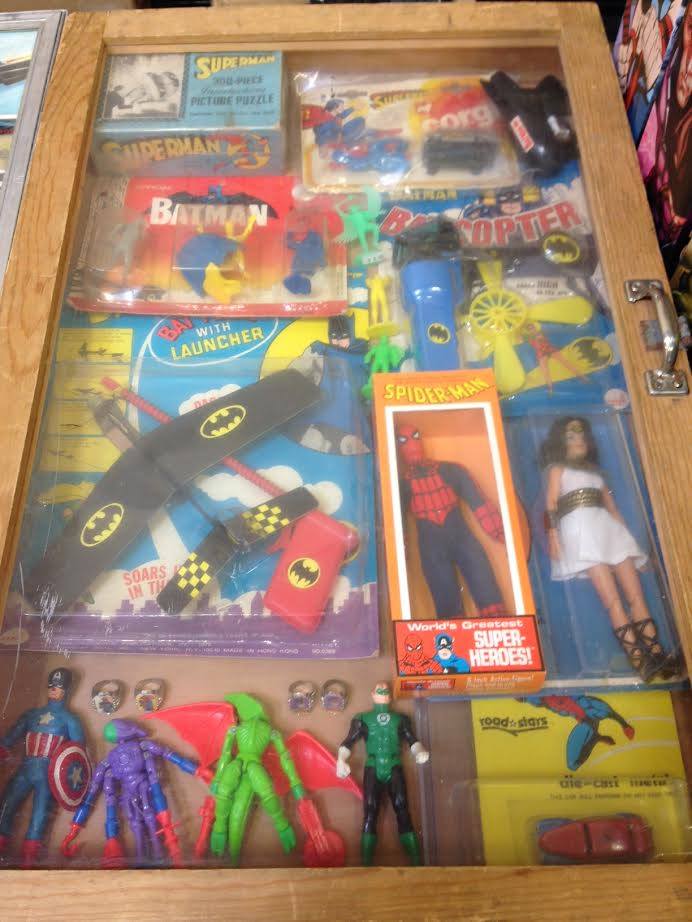 Will I be buying the three day pass next time? Probably not, but I enjoyed the idea of having it more than actually using it. Feeling like a VIP can make the extra cash spent worthwhile for some people, but I was raised by parents with a tight wallet.  That trait seems to have been passed  on to me. Crap.