As someone who actively collects and writes about toys, I get to relive some of the joys of childhood fairly often, but this past weekend, I experienced a hefty dose of that joy through my own kids’ eyes.

(Note: this is NOT another Skylanders article. Honest!) 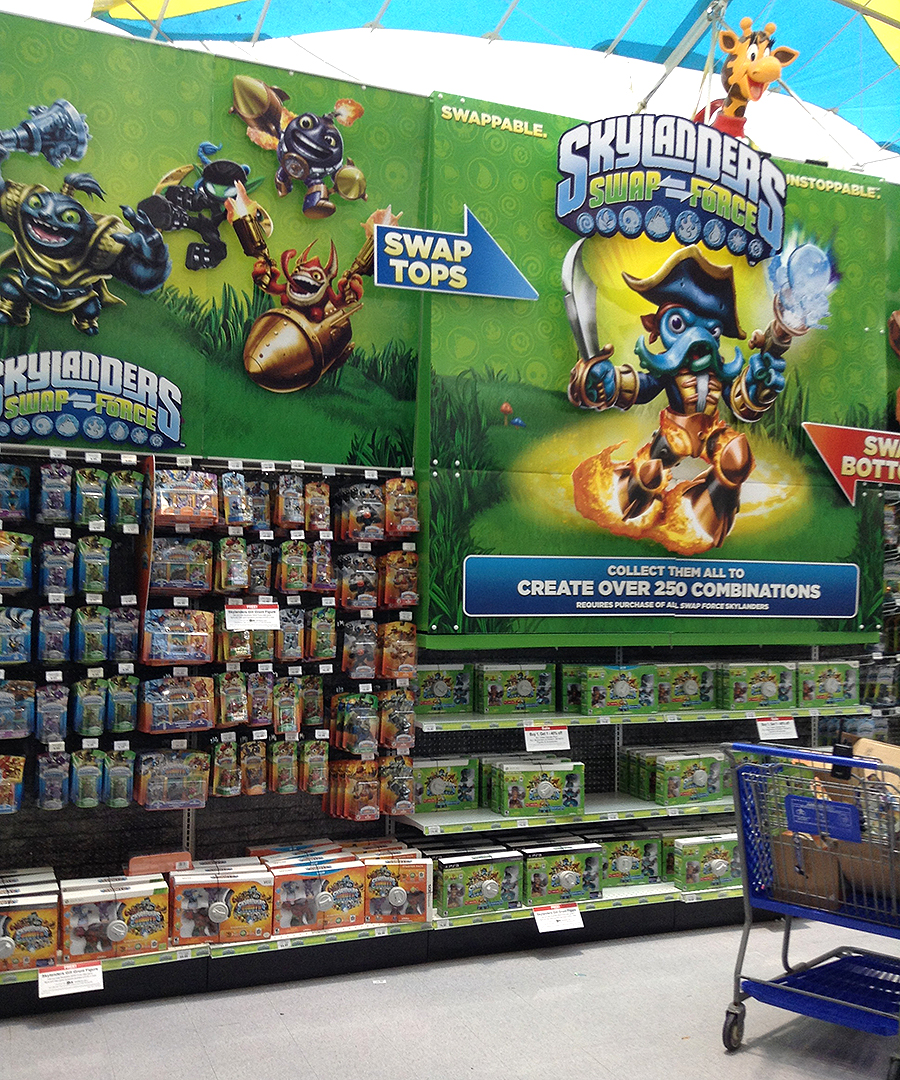 My kids have been huge fans of Activision’s Skylanders video game series, which pairs the game with actual physical toys that you use within the game. The characters are every kids’ dream, with names like Thumpback and Stink Bomb, and strong personalities to match. In addition to the video games, there are lunchboxes, sticker books, blankets… you get the idea, and if it’s got a Skylander on it, my kids want it.

This past Sunday, the latest game in the series, Skylanders SWAP Force, was released, and let’s just say that Christmas came early for many young boys and girls this year.

Imagine being an 8-year-old kid in 1984 walking into the local Montgomery Ward store and being presented with a wall of G.I. Joe — A Real American Hero figures, or maybe it’s 1977 and you see peg after peg filled with the original Kenner Star Wars figures. This was what it was like for my kids this weekend.

They have been watching the calendar and counting down the days, poring over every newspaper ad, and YouTube clip, mentally checking off which characters they wanted the most. When we arrived at Toys R Us on Sunday morning, they literally ran screaming to the huge display that took up the entire entry wall. I swear, rays of sunlight were beaming down and a choir was singing was on the store’s intercom.

And they were not alone. There were a dozen other kids doing the same thing, running from one end of the wall to the other, snatching up any new character they could find, shouting out an occasional “Whoa!” and emitting sounds that only dolphins would understand. They would strike up conversations with the other kids, who were total strangers, spouting off about a character’s special abilities and rarity. All of us parents stood back a few steps in awe at the spectacle before us, while mentally calculating how much this moment of joy was going to cost us. It was awesome.

Skylanders is the one toy line that has totally captured my sons’ attention. For me, it was Star Wars and G.I. Joe, while my friends may have gone for the Masters of the Universe or Transformers. I remember the thrill of going home from the PX with both Snake Eyes and Storm Shadow in my tiny little hands. As an adult collector, I wish my parents had the foresight to take a picture or two, and maybe even pack those figures away when I had outgrown them, but who would have ever thought to do that? They’re just silly little toys, right? Maybe so, but those small things have the potential to swell into a tsunami of nostalgia.

So, I took a few photos this weekend, and if my kids want to rekindle the joys of this day 20 or 30 years from now, they will be able to look back at those pictures while I pull their box of Skylanders figures down from the attic, complete with the stickers, trading cards, hats, books…