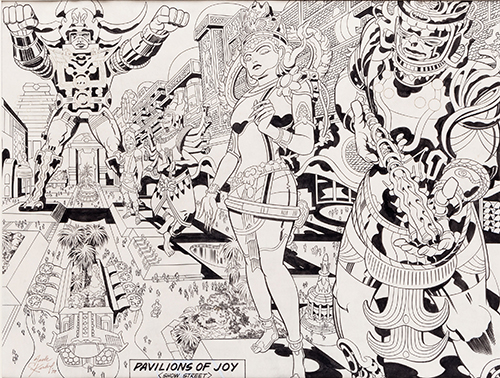 Concept art originally done for film adaptation of Roger Zelazny’s “Lord of Light,” the story that would be the basis of the Academy Award winning film “Argo”

In 2007, Jim Lee, one of the most accomplished comic book writers and artists of the Modern era, and the Co-Publisher of DC Comics, read a story in Wired Magazine and suspected there was something special about two pieces of Jack Kirby art in his collection: Kirby’s Lord of Light/Argo “Pavilions of Joy” illustration original art, 1978, and Lord of Light/Argo “Planetary Control Room (Interior)” illustration original art, 1978.

Shortly after breaking into comics in 1987, illustrating titles such as Alpha Flight and Punisher War Journal, Lee began collecting original comic art. Among his favorites was the legendary Jack Kirby (1917-1994), whose many co-creations included Captain America, Fantastic Four, Hulk, Avengers and X-Men, the last of which Lee himself would re-define on his way to the top of the comics world.

“Jack isn’t called ‘The King’ for no reason,” said Lee. “His work created the visual vocabulary of modern-day superheroes. He established the aesthetics for superhero action.”

So when original Kirby artwork went to auction at Sotheby’s in 1993, Lee was among the bidders.

The pieces were described as concept drawings for an unproduced movie based on Roger Zelazny’s 1967 science-fiction classic Lord of Light.

“I’d been buying Kirby art, loose pages, single pages, here and there,” said Lee, “but these particular pages, I thought they looked cool and would look impressive on the wall.”

Lee placed the winning bid and added the artwork to his collection, where it remained undisturbed until the 2007Wired magazine story, titled “How the CIA Used a Fake Sci-Fi Flick to Rescue Americans From Tehran.”

It told how CIA operative Tony Mendez created a phony movie production company in 1980 to help smuggle stranded Americans out of revolutionary Iran. To set up his ruse, Mendez teamed up with friend and veteran Hollywood makeup artist John Chambers.

“All they needed now was a film — and Chambers had the perfect script,” reported Joshuah Bearman in Wired.

Chambers had been hired to work on the Lord of Light movie. By 1980, the project was dead, but Chambers still had the script and Kirby’s concept drawings. Mendez retitled the project “Argo,” packed copies of Kirby’s drawings and was soon on his way to Iran.

“I read that story in Wired,” Lee said, “and thought, ‘Wait! How can this be unknown for so long?’ Well, it was unknown because it was a secret mission for all those years. When I bought them, I thought they were just cool pieces from a failed animation project from the 1970s. At the time, the whole Argo mission was still a top secret.”

The rescue was eventually declassified, and the Wired story led to director Ben Affleck’s 2012 Academy Award-winning movie Argo. With the movie’s release, the real-life exfiltration of U.S. diplomatic staffers was firmly planted in spy-caper lore.

Now, Kirby’s artwork, which played a crucial role in the mission, and has been in Lee’s collection for two decades, is a highlight of Heritage Auctions’ Aug. 1-3 Vintage Comics and Comic Art Signature® in Dallas. Each piece is expected to realize at least $10,000.

“These are not only fantastic examples of Jack Kirby’s art, but also pieces of American history and Pop Culture,” said Steve Borock, Senior Consignment Director at Heritage. “Kirby was a patriotic American who fought in World War II and co-created Captain America. He would be proud to know his work helped bring those Americans safely back home.”

For his part, Lee is happy to have owned “a cool bit of Americana.”

“I have four kids going to college, however,” he said. “It’s time to balance needs and my love for the art. I’ve always been a collector. I’ve always bought what I loved. I never intended to have an art collection. It just ended up that way.”