Buying items on eBay is truly a gamble — is the item going to be as described? Will it even arrive? Lately, my problem has been “how” the item will arrive.

Last week, a sad, flimsy box sat crumpled on my doorstep, which was especially bad because I knew what was going to be inside. Here’s what greeted me when I opened the box… 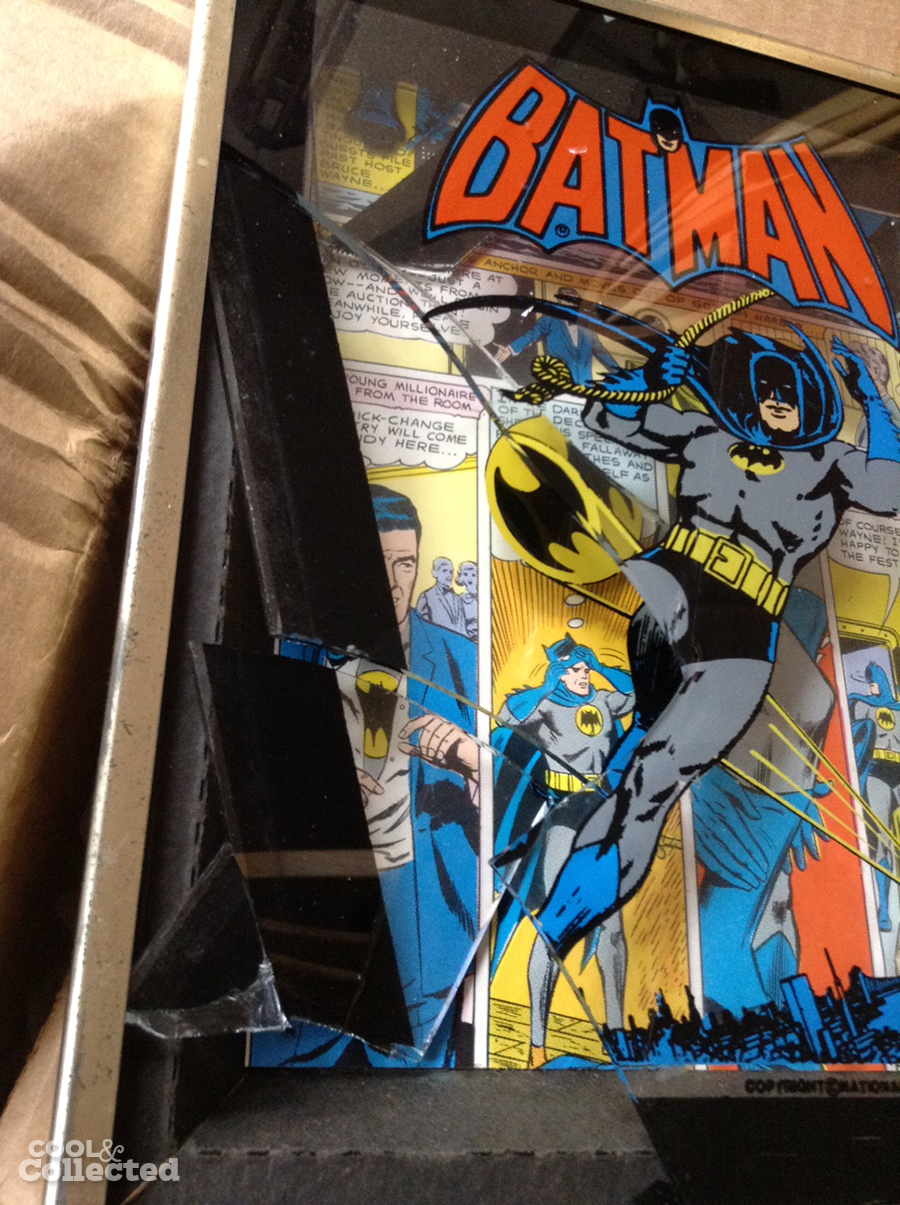 This framed Batman shadowbox from 1973 deserved a better fate than this. The seller wrapped the picture in ONE layer of loose bubble wrap along with a handful of foam packing peanuts and some crumpled newspaper. These frames are somewhat unique in that every shadow box that was produced had a different comic page in the background. Well, now this collectible just became a little more rare. sigh.

For whatever reason, people who I buy from on eBay are morons. Seriously. I bought a vintage Superman board game and the seller wrapped the box in several FedEx tyvek envelopes for protection before putting the item in a box. Well, he ended up attaching one of the flaps to the front of the game’s box. Do you have any idea how sticky that glue is? I spent half a day sniffing acetone while meticulously trying to save the game’s box. Luckily, the resulting damage was minimal but there was some paper loss around the edges, which will always bother me.

Another board game I bought came sealed on all four sides with clear packing tape. The item shown in the auction was not sealed, in fact the contents of the game were pictured, so silly me, I assumed that’s what I was going to get. The seller informed me that she taped up the game’s box before packing it, to make sure none of the pieces would get lost. This was a 50-year old collectible board game, not a new version of Monopoly. Who would do this???

Probably the most unsettling purchase I received was a Corgi Batmobile that arrived in a bubble envelope.  That was bad, but it got much, much worse. Inside the envelope, the car was sealed in a ziplock bag, and when I reached into the bag, I found that the car was dripping wet and smelled of urine. What. The. ??? After throwing the car outside and scrubbing my hands for a good half hour, I fired off an email to the seller, who turned out to be a little old lady in Pasadena (true story). She apologized profusely, and told me she had used a wet wipe to clean off some of the dust before packing the car. She must have neglected to dry it off, and the combination of 40-year old dust, a wet wipe, and a sealed environment combined to generate a humid environment with the horrid smell. I gave her the benefit of the doubt, but God I hope she was telling me the truth. She offered to refund me the price, but I chalked it up as an honest mistake and let it go. Then I went and washed my hands again.

I know that every collector has probably had bad luck with shipping or receiving items, so what is one of your best/worst horror stories?