Microsoft announced this week that they will re-release the original Halo: Combat Evolved game with all new shiny graphics made for the XBox 360. They also announced plans for a whole new trilogy of Halo games. The internet fanboys immediately started whining and moaning about why they couldn’t just let a dead horse lay, but my reaction was…

HELL, YES! (picture me doing roundhouse karate kicks in the air, pulling every muscle in my body.) 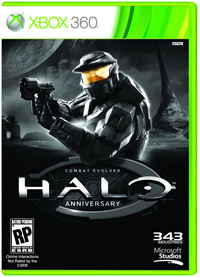 Now understand, I am old — I admit it openly — but I still enjoy video games. (True fact #1: I once owned a web site called 40yearoldgamer.com, even though I haven’t reached that mark…yet). Halo is a game that has literally taken months of my life if you were to add up all the hours I spent playing the online multiplayer matches. It’s a game franchise that I could always rely on to just sit back and enjoy a quick round or two, or hour or two, and stay connected with friends all over the country. Over the years, I have grown worse and worse, and the online matches get more and more frustrating, but I still enjoy the whole Halo universe. (True fact #2: I still own a web site called MasterChiefCollector.com.)

I get chills when I hear those monks chant the Halo tune, and I can not wait to play some multiplayer on Blood Gulch again. I have so many great memories of sitting around with my brother and brother-in-law on our PCs, yelling into speaker phones, so we could chat and play together online before the XBox Live existed.

I honestly think Halo is this generation’s Star Wars.  Harry Potter is up there, but the movies aren’t good enough to be adored, and the products out there are awful. I’m convinced that the elusive Halo movie will eventually get made and will be a box-office success, and once that happens, I’ll be gladly sitting on my pile of “vintage” Halo toys.

Guys are the ones who collect toys (primarily) and the Halo franchise has had a great thing going for years. I think 30-40 years from now, old dudes will go to ComicCons and snatch up the Exclusive Master Chief throwback figures, to help them remember  the all-nighters they spent playing Halo multiplayer. I don’t see them seeking out those rare Harry Potter toys, but who knows?