There is a corner in my man cave that I have been preserving for something special. I’ve been trying to find a vintage comic book spinner rack for the space, but if I had unlimited funds, I think I would go a little ape… 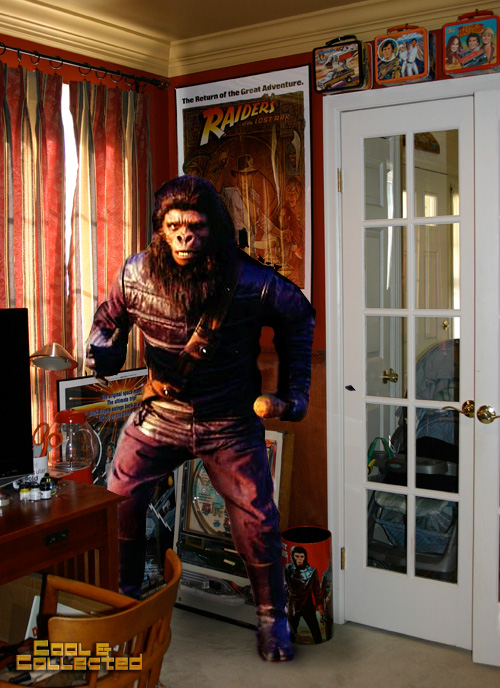 I can’t think of anything better than to be greeted by a soldier ape from the Planet of the Apes movie every time I enter the cave. General Ursus would be a little too intimidating, but I could get along with a low-level soldier just fine. He would be a constant companion while I watch bad movies and flip through old comics and magazines.

Throughout the year, we’ll have good times. On Halloween night, he will greet the trick or treaters at the door. During the Christmas season, you can bet he’ll be wearing a Santa hat. And while watching the super bowl, he’ll toss back a cold one right alongside the rest of us.

Of course, it will take time for my kids and the dogs to stop running away in fear, but convincing my wife that this would be a good idea would be the biggest challenge. For now, this will have to remain a dream powered by Photoshop, but someday the apes shall rise.

This is the latest post in response to the weekly blog challenge presented by the League of Extraordinary Bloggers. Find out what piece of  Hollywood memorabilia other pop culture bloggers would buy if they had unlimited funds. What would you put in your bat cave?

FYI: The ape image above is from a replica prop offered by Apemania.com. I could really buy this thing!