This episode begins with Joe and Brian in a junkyard. Of course, Hollywood junkyards are a little different than the ones you find in other parts of the country. This junkyard is owned by Geroge Sack, a stunt driver, and is filled with vehicles used in movies. George shows Joe and Brian a tanker truck used in The Fast and the Furious, and the tank from Tank Girl. Joe is a little discouraged since it would be impossible to sell those kinds of vehicles due to their large size, and shipping costs alone would be outrageous. 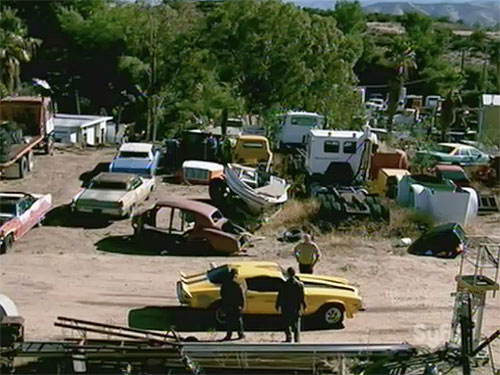 Joe’s mood changes rapidly once George shows them the Bumblebee Camaro from Transformers, along with the official studio paperwork to authenticate it. Joe and Brian take the Camaro for a spin, hollering like the Duke boys the whole time. George wants $35k for the car but settles on $22k cash. 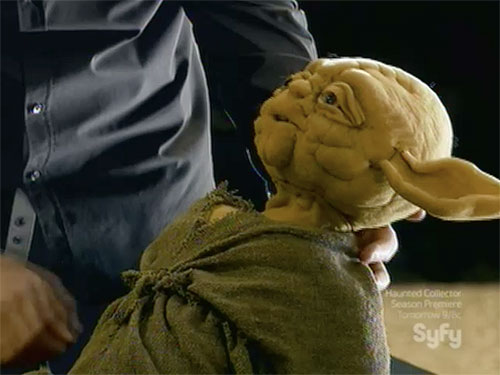 Back at the Profiles Loft, Tracey tells Joe that she has tracked down the original Yoda puppet from Star Wars, and of course, Joe is skeptical. Toby Froud brings in the puppet and explains how his mother created the puppet with Stewart Freeborn to be used in the rehearsals of the filming of The Empire Strikes Back. Toby has photos that show Jim Henson, Frank Oz, Stewart Freeborn and Toby’s mother working with the puppet. Joe is duly excited, but really has no idea how much the puppet would sell for at auction.

Toby puts the puppet up for bid and it ends up selling for $22,500, a price that seems low to me, considering how much the Star Wars camera sold for on last week’s show.

Joe and Brian drive their newly-acquired Bumblebee to a gathering of the Entertainment Industry Car Club. it’s a rainy day, but that doesn’t keep the die-hard movie car buffs from coming out and showing off their rides. There are plenty of replicas of famous movie cars, including the A-Team van, Scooby Doo’s Mystery Machine, Knight Rider’s KITT, the Bandit’s Trans Am, and Magnum’s Ferrarri, among others. 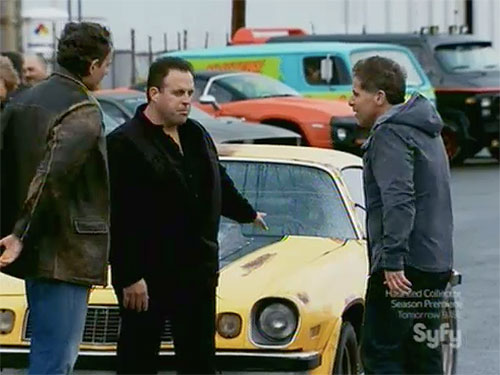 Randy Rousseau is a collector and offers to buy Bumblebee on the spot–for his son! He offers Joe $30k for the car. After some haggling, Joe makes a little wager with Randy. If he can get the car to drive on its own, Randy will pay him $40k. Joe tells Bumblebee to “Go” and the car takes off, does a few high-speed turns, and returns to its new owner. Joe says that it’s a trade secret of the studio as to how the car can drive on its own, but I would assume it was remotely controlled–or maybe it came with a Trunk Monkey (which would be AWESOME!). 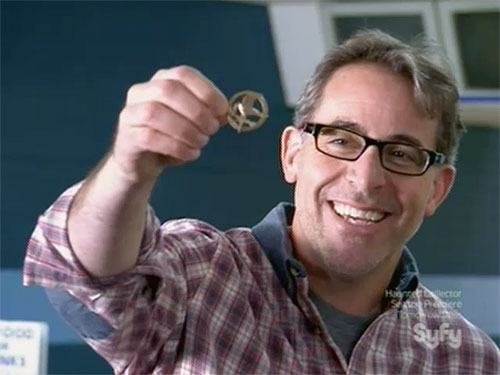 Joe and Tracey fly to North Carolina on a hunt for some Hunger Games memorabilia. They meet with Chuck Nance, a local dealer who bought a warehouse full of props used in the movie. Most of the items he bought have already been auctioned off, but he did retain one key piece–a Mockingjay pin–which joe buys outright for $2k. 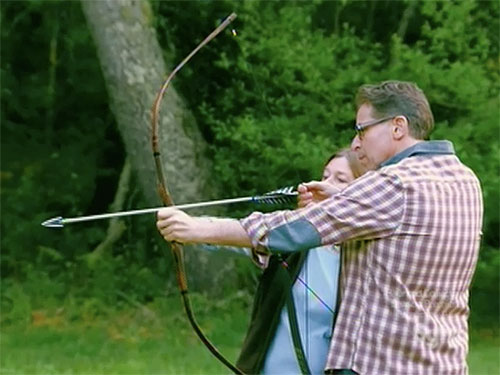 Next, they visit Tammy Hopkins, who runs tours of the filming locations in Cedar Mountain, North Carolina, and she shows them the locations of some of the key scenes in the movie. After the production wrapped up, Tammy and her team swept the woods on a hunt for anything that may have been left behind, and they just happened to come across Katniss’ bow and an arrow–are you kidding me! Why something as important as Katniss’ bow would have been discarded in the forest is beyond me, but I guess stranger things have happened. The bow is not for sale, but Joe does get a chance to shoot it once! 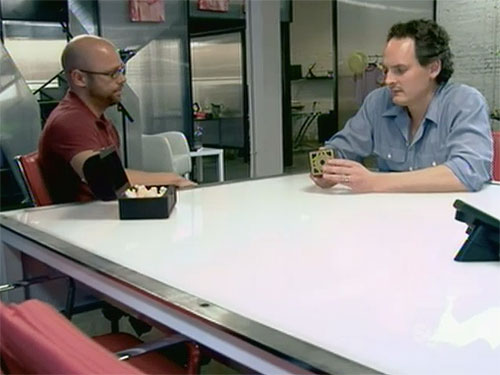 Back at the Profiles Loft, Brian meets with Chris Senger, a collector who has a Hellraiser puzzle cube prop and might be interested in selling it for the right price. In the past, similar cubes have sold for up to $5,000. Chris doesn’t have any documentation, so Brian brings up images from the movie for comparison and immediately spots some red flags. There is no wear and tear around the edges and the pattern isn’t quite right–it’s actually inverted. Chris is crushed, and needs to have a chat with his “friend.”

Back in North Carolina, Joe and Tracey visit the site of the Hunger Games’ District 12 in Hilldebrand.  The site consists of 72 acres and an abandoned town that once served as a textile village. Ed Phillips, a realtor, meets with Joe and Tracey and informs them that the entire property is up for sale with an asking price of $1.4 million, which sounds low to me, considering how much acreage is included, never mind the fact that a major blockbuster was filmed there. The property still looks exactly like it did in the movie, and includes Katniss’ house and Peeta’s bakery. The movie was actually filmed in those houses, and not on a Hollywood set, and tourists are already flocking to the site. Ed tells Joe that the property’s owner, Wade Phillips, would like to put it up for auction with Profiles in History. Joe is ecstatic and Profiles in History is entering a whole new territory–real estate.