I wanted to find a way to photograph smaller items, like action figures, in a more exciting manner than just snapping a picture of them against a white background. If you buy or sell toys on eBay, you know how important a good photo can be. So, I went down to the basement and got to work.

I had a large air purifier with a burnt out motor, and I knew I could find another use for its space-age parts. 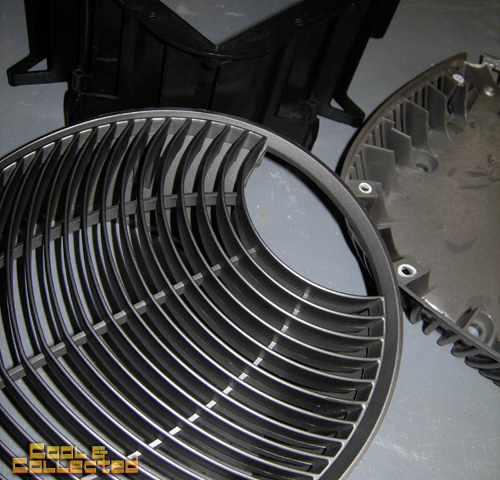 I dismantled the air purifier and was left with some large parts, but all I needed for this project was the fan cover. 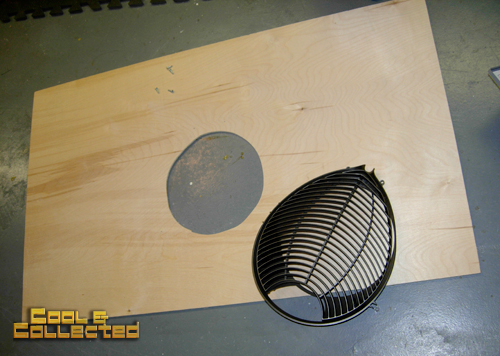 I traced the circular opening onto a 1/4″ sheet of 2′ X 4′ plywood and cut it out with a jigsaw. Obviously, I wasn’t too worried about the accuracy of the cut! 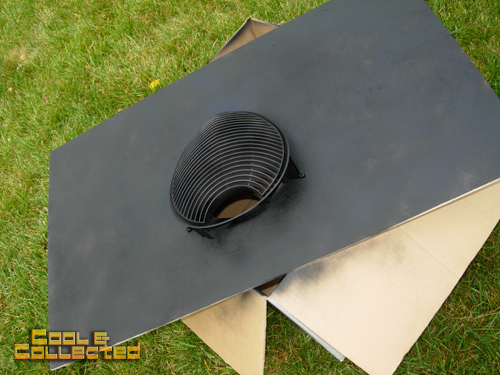 I attached the fan cover to the plywood with four bolts, using the plastic screw holes that were originally used to hold the cover onto the air purifier. Next, I spray painted the board and fan cover with flat black paint. You don’t want to use glossy paint since that would cause light to reflect, and could mess up your photos. The idea is to create a background, which should not overpower the subject of the photo. 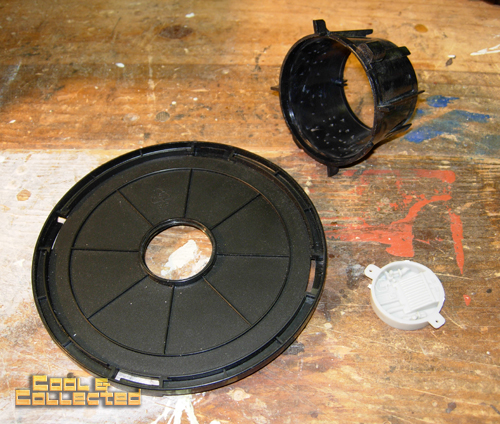 I realized that I would need a platform for the items to stand on, so I grabbed a few pieces from the junk bin. The large disk is the bottom of a CD-Rom spindle, that black cylinder is from a hairdryer, and the grey piece was from an old model kit. I glued them together and spray painted them with the same flat black paint. 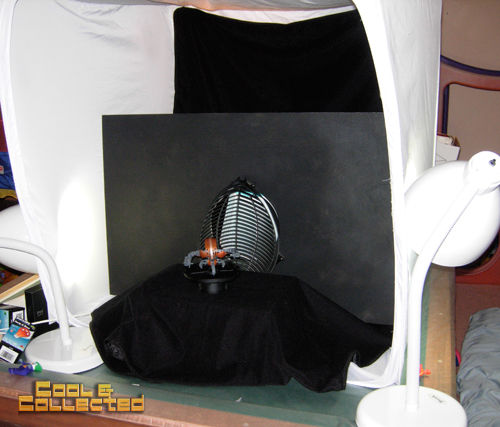 Once the paint was dry, I assembled the photo booth. I used a blue party light bulb in a regular old table lamp and set it behind the black board. there is a light pointing from the front right, lighting the figure, and another light is positioned slightly behind the figure on the left side, which will help to lighten some of the details from behind.

Here’s a picture of the action figure taken with my point-and-shoot camera with the flash. Not very exciting. Now take a look at this… 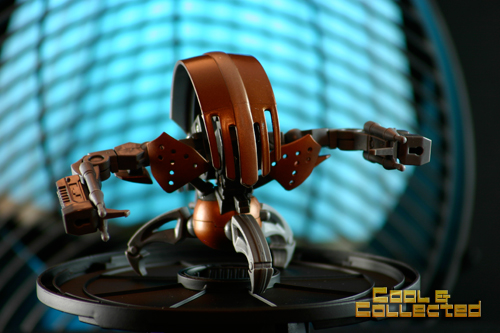 This is what the exact same shot looks like when taken with my DSLR camera. I use the zoom lens fully extended, with the mode set to AV. The F-stop is set to 5.6, and the flash is off. I use a tri-pod and a remote shutter release to make sure there is no movement on the camera which would cause the image to be out of focus. The low F-stop is what makes the background appear blurry, while the foreground is nice and clear.

If you don’t have a DSLR, try the museum scene mode on your camera, and zoom in as far as you can. Your camera will probably be 10 feet away from the action figure, but it really does work.

In the next post, I will show you some of the different ways this simple set up can be used to take dynamic photographs of your action figures and toys.