When I read the description for this week’s episode of Collection Intervention, I wasn’t too excited because its focus was on Barbies and Hot Wheels–two things that don’t interest me much–but I am a sucker for collectors and their collections, and this show totally sucked me in. 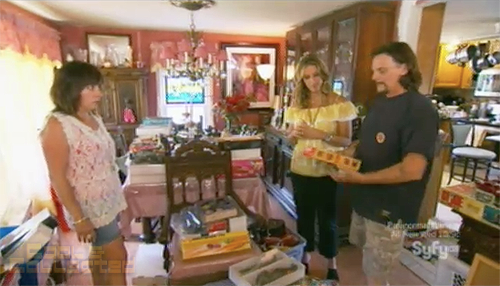 This episode begins at Jack and Debbie’s house, which is overflowing with Jack’s G.I. Joe and Hot Wheels collection. Vintage and new toys are literally everywhere in the house, haphazardly covering every flat surface. The collection has taken over the entire house so they’ve called in Elyse Luray to work her magic.

Jack seems more than a little on edge, and doesn’t like anyone to touch his stuff, including his wife. Elyse tells him that a true collector would never store his items in such a way, where everything could get damaged or lost.

Jack reluctantly agrees to allow Elyse to help him thin the collection a bit, and he shows her some of his rare vintage G.I. Joe figures (dolls?), including several African American figures in their boxes which can be worth thousands of dollars each. Jack is duly impressed with Elyse’s knowledge and actually allows her to touch some of his toys!

This whole episode, you just have the feeling that Jack is going to lose it. He is clearly having a difficult internal struggle with not only letting items go, but even letting other people touch his things. Elyse takes a firm hand with him and does a good job of keeping his sanity intact.

In addition to the G.I. Joes, Jack estimates that he has 60,000 diecast cars. He calls his collection his 401K, but Elyse thinks he needs to treat it much better if he plans to fund his retirement with it. 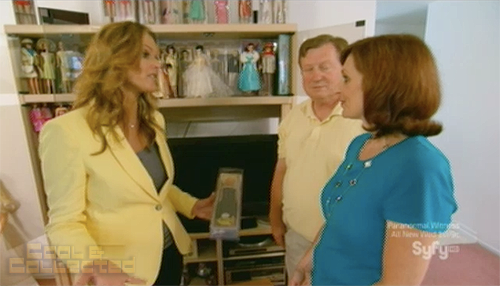 The second collector featured on this episode is Beverly, who has a passion for Barbie. Beverly and her husband, Michael, live in a nice house in a nice suburb, with there three nice teenage sons.  The house is spotless, but don’t open those closets!

Elyse arives and is given the tour of the Barbies. Beverly has a large collection of vintage Barbies on display, and Elyse is impressed until she gets to see the closets–every closet in the house is filled with Barbie items, including her sons’ bedroom closets. one of her sons complains that he only owns four shirts because there’s no room for more in his closet!

Elyse’s big thing in both of the episodes we have seen is that a collection needs to be displayed in order to be enjoyed. I agree with that sentiment, but I also think that it’s okay to have items in storage. Personally, I like to rotate the items I display–heck, museums do this all the time (not that my collection is a museum–yet). I guess the trick is to find the balance between the two and really winnow out the items you are never going to display and enjoy. 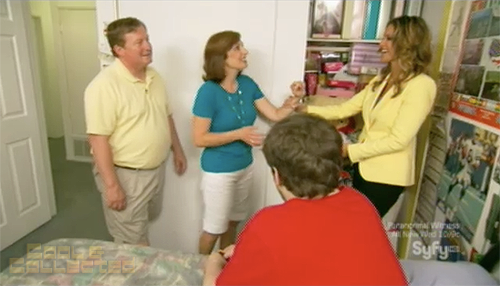 Like the other collectors we’ve seen on this show, Beverly is emotionally attached to just about everything in her collection. Elyse tries to explain that all the extra pieces that aren’t enhancing the collection should be sold to clear out some space for Beverly’s growing family. Elyse fires with both barrels by saying, “speaking mother to mother,” she wants to help Beverly  find a solution to help her kids.

Back at Jack’s house, Elyse wants to move some items outdoors to get a better idea of what he has. Jack refuses, citing the possibility that the harsh sunlight will damage the items, but eventually agrees after they put up a shade tent. Elyse calls in some Hot Wheels experts–Joe, Frank, and crew–and Jack is on the verge of losing it. He can’t believe all these people are walking into his house, grabbing his stuff, and hauling it out to the lawn. I felt really bad for Jack throughout this entire show, and this scene was probably the most difficult to watch. 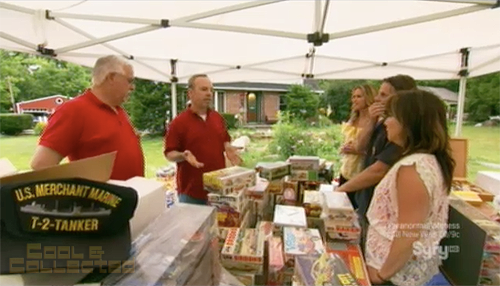 Meanwhile, in the shade-bearing tent in the yard, the appraisers are giddy with excitement. Jack’s got a pretty incredible collection of vintage Hot Wheels cars, including a bunch of Hot Wheels VW Bus Beach Bombs

with surfboards that are worth $125 each. Elyse tells us that a Beach Bomb recently sold at auction for $70,000! (Yep, it says so right here on the Hot Wheels Wikipedia page.)

are depreciating in value and she thinks he should sell them off and keep the vintage ones. She plans to take Jack to the Brooklyn Flea Market the next day where he can sell some items.

Back at Beverly’s house, Elyse has called in another expert appraiser, who goes through Beverly’s collection. She is not nearly as impressed with the collection as Elyse was, stating that most of the dresses and accessories are missing pieces, which seriously diminishes their values. The expert offers to buy a commuter set

with the TM mark

(apparently this is a sign of the earliest Barbie collectibles = most rare) but Beverly refuses to sell. I can’t really blame her. Much like in last week’s episode, I found myslef questioning the logic behind this tactic–why would a collector sell the smallest, rarest item in her collection, and not the piles and piles of low-value items that are actually clogging her closets?

Beverly’s husband convinces her that she should sell off some of her duplicates, and she tearfully agrees. Elyse takes them to a local collectibles shop, where the owner has an original #1 Barbie in the box–something Beverly has always dreamed of owning–so this is her incentive to sell off some of her collection. Now, THIS is the strategy that should be employed for every collector on these shows. Sell off the dreck and buy your holy grail with the proceeds–it’s a win-win proposition. THAT is how you make this show better. 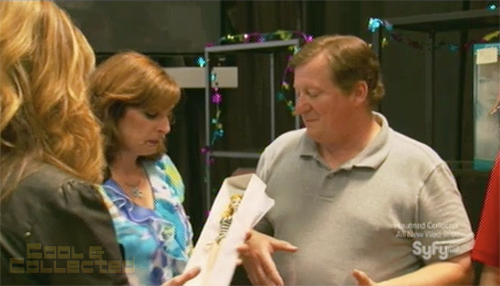 Beverly and her family set up a booth at the Frank and Son collectibles show (we saw Joe Maddalena at that show on Hollywood Treasure–I want to go there!). It doesn’t take long before a guy walks up and offers to buy Beverly’s entire set of holiday Barbies for $1,000, but Beverly turns down the offer–those items were only brought for display. Eventually, she does part with some items, and is happy to find that they are going to like-minded women with fond, nostalgic memories of their own childhood Barbies. At the end of the day, Beverly’s family is proud of her for letting some things go, and present her with an original #1 Barbie

in the box–they’re such enablers! sniff.

Meanwhile, at the Brooklyn Flea Market, Jack is feeling overwhelmed, but I’ll give him all the credit in the world because he does sell some items. At the end of the day, he and his wife sold over 39 items from his G.I. Joe and Hot Wheels collection–it’s a start!

As the credits roll, we get a little snippet of text that tells us that Jack has moved his best items into glass display cases and the rest of his house is cleared of his collection. Way to go Jack!

As I stated at the beginning of this recap, I may not have been too excited to watch a show about Barbies and Hot Wheels, but I thoroughly enjoyed it in the end. I even learned a thing or two, and if you find me at a flea market rifling through the Barbie clothes, looking for a TM, please don’t tell anyone you saw me there.