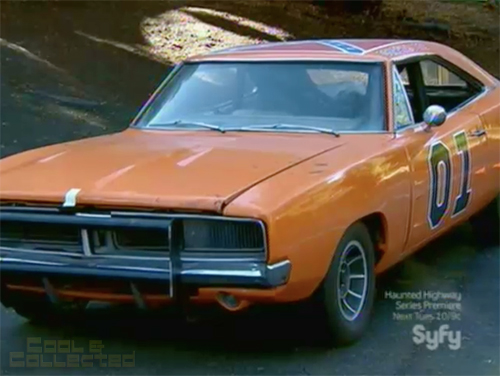 This episode of Hollywood Treasure begins with Tracey and Joe following up on a lead for an original General Lee from the Dukes of Hazzard. Johnny Oz has what he believes to be the only stunt version of the car left after the rest of them were destroyed in the production of the TV show. The car is signed on its hood by the show’s cast and crew, but the General Lee is one of the most replicated cars in the world, so Joe needs iron clad proof that it’s the real thing. Unfortunately, Johnny only has a letter from the stunt driver who he bought the car from, but nothing more, so Joe won’t make the deal. 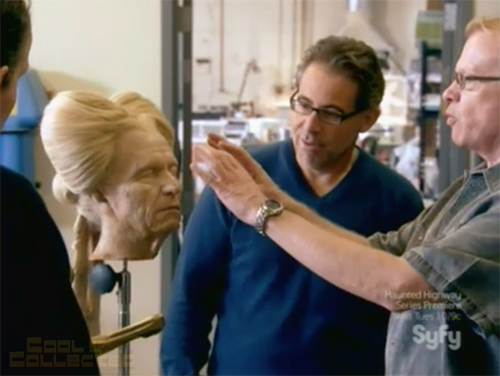 Brian and Joe meet with Greg Cannom, an oscar-winning visual effects artist, in his studio. Greg is hoping to make some money by selling some of his work in order to fund a new project he is developing. He shows Joe and Brian some props from Bram Stoker’s Dracula, including Gary Oldman’s makeup and a small Dracula maquette. 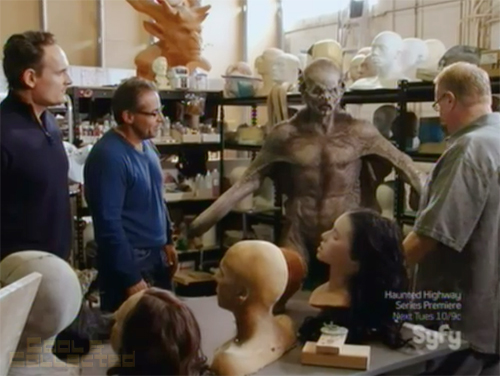 In the next room, Greg has a full bodysuit that Gary Oldman wore in Dracula, and a stack of severed prop heads from the movie, including Winona Ryder’s. He also has another full body Drac creature that was made with yak fur. He tells Joe that the hair work alone would cost $75,000 to do it today. Greg is reluctant to sell the items but agrees to put them up for auction. 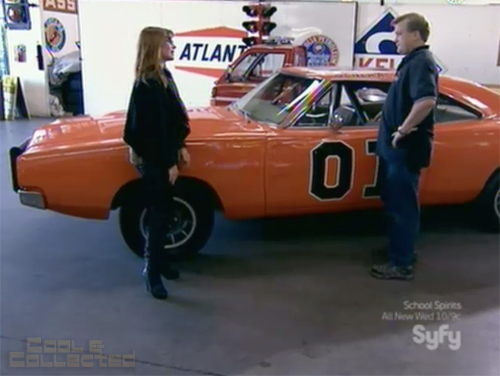 Tracey meets with Bob Hartwig, who owns a screen used General Lee, to see if he has any tips on ho to authenticate Tommy Ott’s General Lee without the paperwork. Bob informs Tracey that there were 235 cars used in the production of the Dukes of Hazzard. Of those 235, only 19 survived. The studio kept 2 and 17 are in collectors’ hands. He tells Tracey that she really needs the paperwork or else there’s no way to authenticate it. 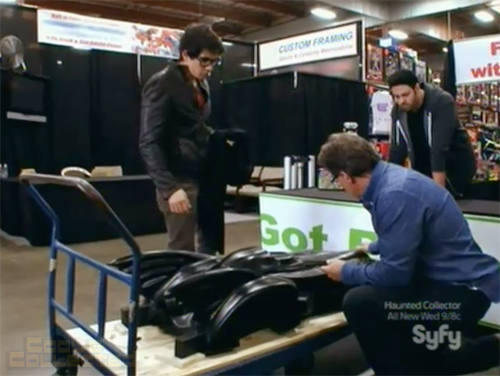 Joe and Jon go to another fun event, this time it’s the “Frank and Son Collectible Show.” (Why don’t those shows exist around here!) Joe and Jon are running a booth for appraisals, and a variety of items are brought in, including Robin Williams’ sword from Hook, a Deep Space 9 phaser, and a miniature Batmobile that was used in the first Tim Burton movie (but it’s not for sale). 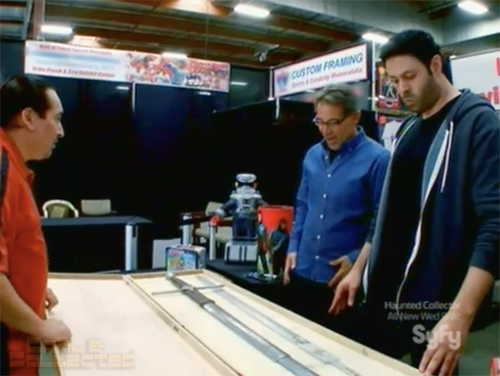 One item that is for sale though is William Wallace’s sword from Braveheart. The owner wants to sell it for $10,000 and Joe counters with $2,500. They eventually settle on $5,000 cash on the spot. 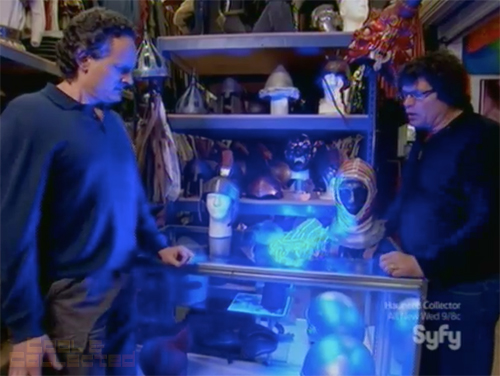 Brian visits Chris Gilman at his business, Global FX, a leading prop making company. This place is incredible, stacked to the ceiling with props and wardrobe items.  Chris shows Brian the Dr. Manhattan gloves from Watchmen, that have 2,500 blue LED lights, and also nearly sets his shop on fire in the process. 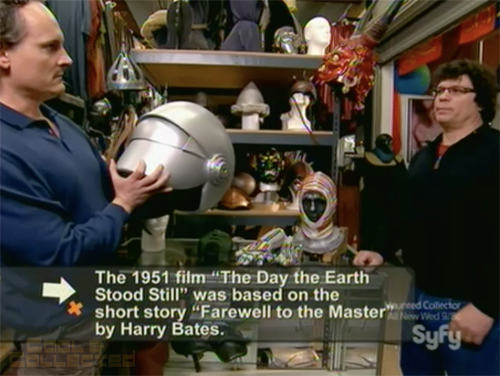 He also has Gord’s helmet from the 1951 classic The Day the Earth Stood Still! Brian is duly impressed. 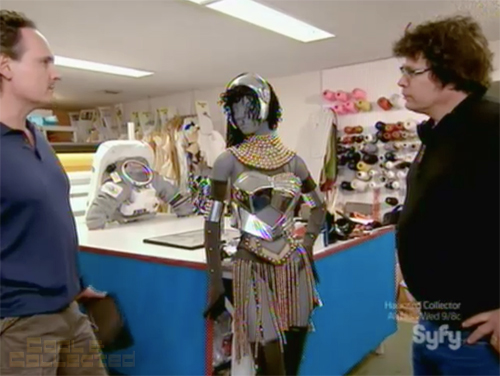 The item that Chris actually wanted Brian to come see, is Whitney Houston’s “Queen of the Night” outfit from The Bodyguard, along with the original conceptual drawing with a handwritten note from Houston. With Whitney Houston’s recent pssing, the value is probably in the $20-30,000 range, but Brian thinks it shouldn’t go to auction right away. Out of respect to Houston’s legacy, he suggests that the outfit should go on display. Chris decides to consign it with Profiles in History, and I think Brian was hoping they could go back and discuss that Gord helmet! Maybe next season. 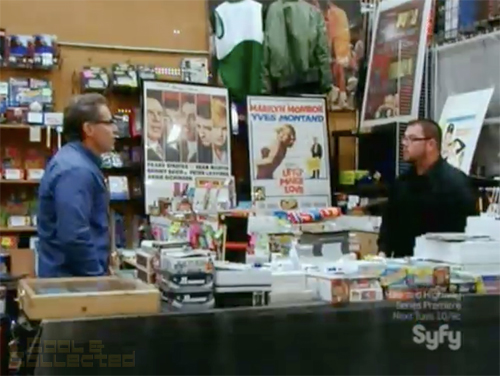 Back at the collectibles show, Joe wanders around to see what he can find in the other booths. He stops in a booth that is selling vintage movie posters. Jason Court’s grandparents owned a movie theater and he inherited stacks and stacks of one sheets and inserts, and he doesn’t seem to know anything about them! At one point he asks Joe if their value is less because they were folded, not knowing that movie posters were folded when they were sent to the theaters. He tells Joe that he has 1,500 more posters in his van! Joe suggests that Jason should take the posters to auction. Me? I would have been hitting the ATM on the spot and offering him pennies on the dollar (did I say that out loud?). 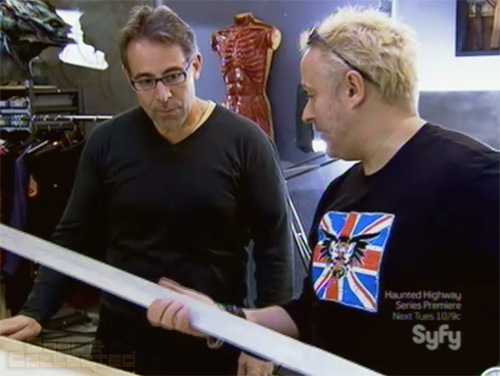 Joe meets with prop expert Gary Tunnicliff to authenticate the William Wallace sword that he bought. Gary informs him that the sword would have been made by Simon Atherton who includes his distinctive maker’s mark in all the swords he makes. Luckily for Joe, the maker’s mark is present and his $5,000 investment was money well spent. Joe is excited. 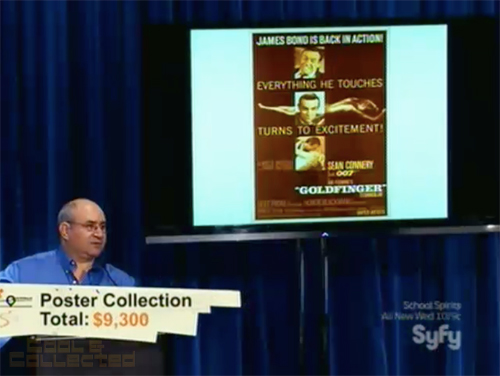 Auction day — The William Wallace Braveheart claymore sells for $45,000! That sword is a prop that I could never let go — you would have to pry it from my cold dead hands — but Joe now has a lot more money to spend on other props. A bunch of movie posters go up for bid and Stacey Roman does his best to get top dollar for them. An Incredible Shrinking Man one sheet poster sells for $375 and a Lone Ranger one sheet sells for $400. An awesome James Bond Goldfinger one sheet sells for $1,800, and a Rear Window one sheet sells for $4,750. In all, the collection of posters sell for over $42,000. Not too shabby.