Collection Intervention premiered on Syfy last night and I have to admit to being more than a little nervous about this one. The premise of the show is that the host, Elyse Luray, helps people who have collections that have grown out of control–think Hoarders for geeks. The reason for my trepidation is that I was afraid the show would give us collectors a bad rap.

The ominous tone of the voiceover during the show’s intro didn’t do a whole lot to allay my fears:

“There’s a fine line between collecting and hoarding, where the attachment to the collection becomes an obsession–an obsession gets completely out of control, where one person’s passion becomes another person’s nightmare. It can ruin friendships, wreck finances, bring relationships to the breaking point–something has to give.”

Elyse Luray is a seasoned pro in the collectibles area, having been an author, appraiser, and auctioneer, as well as hosting TV shows such as PBS’ History Detective and HGTV’s World’s Longest Yard Sale. This premiere episode starts with Elyse visiting Garet and his wife, Consetta, who have amassed an entire houseful of Star Wars items. (It was awesome.) Their collection may have started small but it eventually grew “like a fungus,” taking up just about every square inch of living space. They even had their Star Wars themed wedding cake, a massive Star Destroyer, preserved and on display. This couple is hard core.

Elyse thinks the collection is worth $150k–three times what Consetta and Garet thought it was worth–and tries to convince them that they need to sell off some of the clutter, and it only takes about three minutes before the tears started to roll.

While Garet and Consetta have their own issues, I would put the next collector in an entirely different class. Mark is a Catwoman hoarder. Yup, I did it, I used the “H” word, here’s why: Everything Mark buys is immediately put away in a box and tossed on the pile in his garage, a place he never lets anyone see. Mark spends money on his Catwoman fetish before he pays his mortgage–a practice that obviously doesn’t sit well with his wife, Lolly. 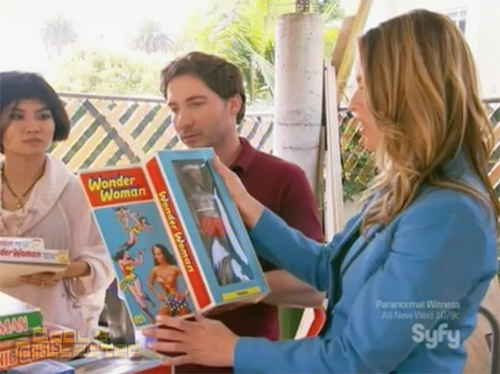 Most of the items Mark has collected are fairly recent products that don’t have much monetary value, but there are a few gems tucked away in the boxes, such as a cool ceramic Catwoman music box

. She estimates the value of his entire garage of items to be $4,000-6,000, whereas Mark thinks it is worth around $100k, and to him, it probably is. I felt bad for the guy, because we all have items that we value way more than they’re worth–he just happens to have an entire garage full of them!

This show has an awkward way of flipping back and forth between the two collectors, and now we’re back at Garet and Consetta’s house where Elyse has invited Brian Flynn of Super 7 over. She thinks if he buys something from Consetta, the floodgates may open and the Star Wars toys will start flowing out the door. Easier said than done. Brian offers $500 for Conseta’s vintage action figures, but she refuses. Eventually, she agrees to part with just one, Wicket, and Elyse seems happy that the ice is broken. 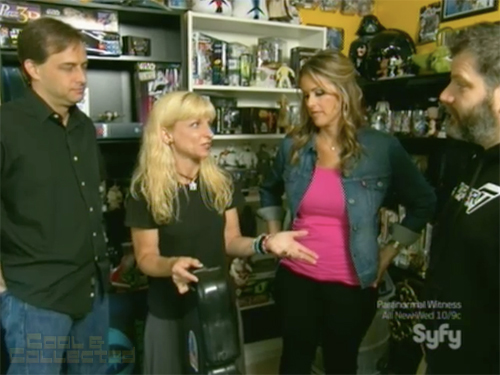 This whole process just baffled me, and I’m sure it’s due to the show’s editing and need for drama, but why on Earth would you ask them to sell the items that are probably some of the most collectible and valuable items in the house, leaving behind all the worthless dreck that’s just taking up space? Nevermind the fact that they are loose action figures, which take up almost no room! Everyone wants a vintage collection of Star Wars figures, so why would Elyse think it would be easy for Consetta to sell her collection, or break it up. After this scene, I snarkily tweeted that I bet Consetta already bought another Wicket as soon as Elyse left the house. Who thinks I’m wrong?

Back at Catwoman’s hideout, Mark and Lolly have a sit down. Mark knows he needs to unload some stuff to save their marriage, and reluctantly agrees to meet with Larry, who owns Blast from the Past collectibles. (Remember Larry? We saw him on an episode of Hollywood Treasure this season.) Larry offers $50 for a boxed Steve Austin doll, citing the poor condition of the box. Mark doesn’t want to sell and thinks the price is too low (I do too!). He also has a boxed Maskatron and a large unopened Mego Hulk figure. Larry buys all the items and whatever else was in the boxes for $1,100. It’s hard to judge if this was a good price or not because we didn’t get to see everything in the box.

Here’s where I had another issue with the show. I think Elyse could have made more money for Mark by selling these items to collectors rather than to a dealer. It would have been easier for him to part with the items if he felt like he was getting a good deal rather than half of the items’ value he received by selling to a dealer. I know on Clean Sweep or Hoarders, the typical solution is to dump or donate a good bit of the items, but this show is dealing with collectibles that actually have a good bit of value, so let’s see what they’re really worth!

A bit later in the show, Mark actually does try his hand at selling some of his Catwoman items directly to collectors. At one point while holding up a hideous t-shirt, his wife, Lolly, asks him “What were you thinking when you bought this thing?” To which he replied that he bought it because he bought ANYTHING that had Catwoman on it. Well, there’s your problem right there.

Lolly sells a (scary) Michelle Pfeiiffer Catwoman bust for $110 and Mark is not happy, but he slowly overcomes his anger, and the stuff starts flowing out the door. He makes $238 that day and feels proud of his accomplishment. I’m not sure what his mortgage bill looks like, but the show did note that the happy couple is nearly out of debt, so way to go Mark!

The last scene of this episode occurs at, of all places, Rancho Obiwan! It turns out that Consetta is friends with Steve Sansweet, the biggest Star Wars collector and curator in the galaxy. Consetta has put many of her items up for auction, with the results going to charity (I don’t believe this was stated on the show, but I learned about that fact later–very awesome). After a bumpy start, her items start selling for good prices and the full-size Captain Rex statue by Gentle Giant sells for $2,300–to Steve Sansweet!

I did enjoy seeing the Star Wars items sell for decent prices and going to collectors rather than dealers, and I hope they pursue this avenue more often in future episodes. Everyone wins with this kind of scenario, and we viewers get to see some “real” prices and can learn about valuing our own collections a little better.

Overall, I think that Syfy did a commendable job with this show and I am looking forward to future episodes. It’s weird, but the collecting community is the harshest critic of these kinds of shows. Personally, I think it’s important to watch them, promote them, and cheer for their success if we ever want to see more. Never in a million years would I have imagined seeing vintage Mego figures featured in a prime-time major network TV show, unless it was used to mock their existence, so I will continue to hope for the best for this show and any other shows with collectors in mind.

Also, one last note: I want to commend Elyse Luray for interacting with me and others via Twitter before, during, and after the show. She certainly didn’t need to do that, but the fact that she did, made the whole experience that much more enjoyable. Follow her on Twitter and see what I mean.

So, that’s my long-winded review. What did you think?