Have you heard of Minecraft? Of course you have! If you have a child living under your roof between the ages of 4 and 18, you’ve probably heard about nothing BUT Minecraft for the last couple of years. It’s amazing to me that this simple game has had the staying power that it has. My kids spend hours playing it — when their friends come over, they bring their iPads and join each other in the worlds they have created, they watch countless Youtube videos, and constantly search the internet for new “seeds” — secret codes that help them to create new worlds. 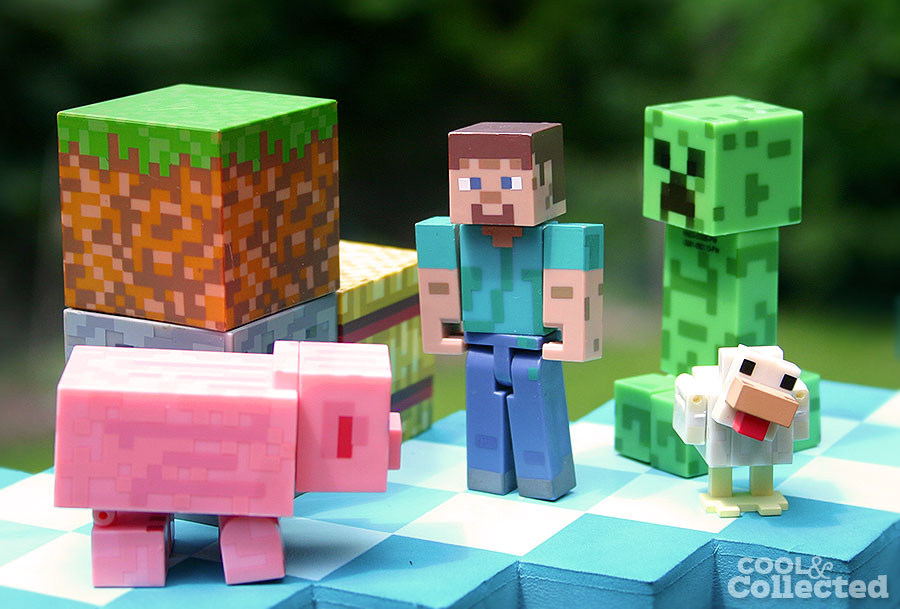 One of my favorite pastimes is to wander the toy store aisles with an eye for what toys my kids will reminisce about when they hit their middle-aged years. I like to think that they will be nostalgic for the toys they grew up with, much like I am for my Star Wars and GI Joe toys. I have a started to procure a few toys for each of my sons, based on their interests, with the intent of storing this box away as a time capsule of their youth. I’ll tape it up and write “Do Not Open until 2035” which is when they will be entering their 30’s.

The very first item I put in each of their boxes was a Minecraft toy. My oldest son got a Steve action figure, which is possibly the greatest likeness of any action figure ever made. If you’ve been in the toy section of any store in the last year or so, you’ve doubtless seen plenty of these blocky action figures. They have as much articulation as the original Star Wars action figures I played with back the early 80’s, and my boys use them to reenact some of their favorite moments from the game.

We’ll often be sitting in the living room, when all of a sudden, my youngest son will yell “Enderdragon!” making us all jump, thinking a real dragon is surely descending upon us. The Enderdragon is the “big bad” in the world of Minecraft and when he makes an appearance, it’s kind of a big deal. So, this is why my youngest son’s box will have an awesome plush Enderdragon that recently arrived from Entertainment Earth.

There’s no telling what will be the hot collectible of tomorrow, but I think Minecraft toys are a pretty safe bet. I also see Imaginext, Skylanders/Amiibos, and Angry Birds toys as being among the items that will bring a wave of memories to my kids. What do you think are some other current toys that today’s kids will get nostalgic for when they start to enter their middle-aged years?