The other day I showed you some great vintage toys up for bid in Hake’s current auction, but there were also a bunch of action figures that caught my eye. Sometimes, it’s just easier to buy an entire collection than to build one piece by piece. So, if you have some cash burning a hole in your wallet and are looking to expand your action figure empire, take a look at these…

9.5x12x17.25″ brown cardboard case box is as issued with large tape pull on one side. Original print on side “Stock No. 2874, Battlestar Galactica 4″ Figure”. Fine/VF. Set of six 6×9″ colorful blister cards, each contains posable action figure 3.75″ to 4.25″ tall from Series 1 assortment by Mattel ©1978 Universal City Studios Inc. Figures include one each of Cylon Centurion (small nick inside of blister from helmet), Ovion, Imperious Leader, Lt. Starbuck, Commander Adama (has slt. trace of waxy coating on face as aged) and Daggit. All cards are unpunched old store stock and NM with Mint figures. 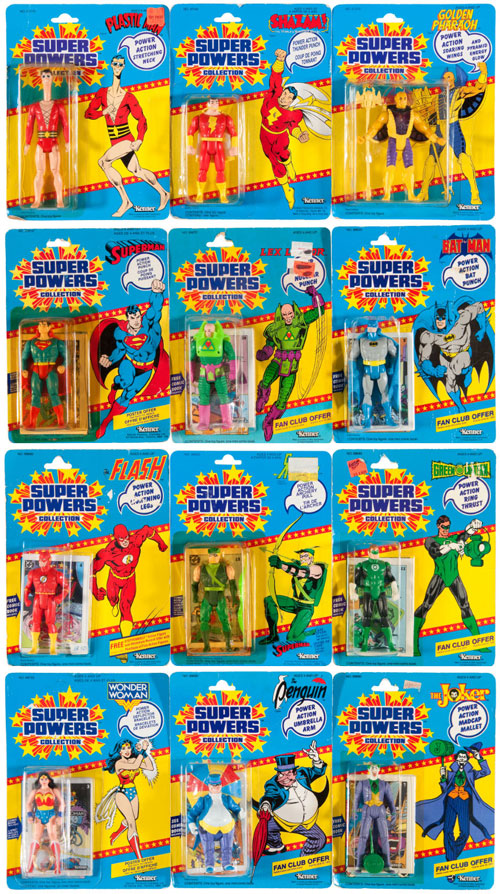 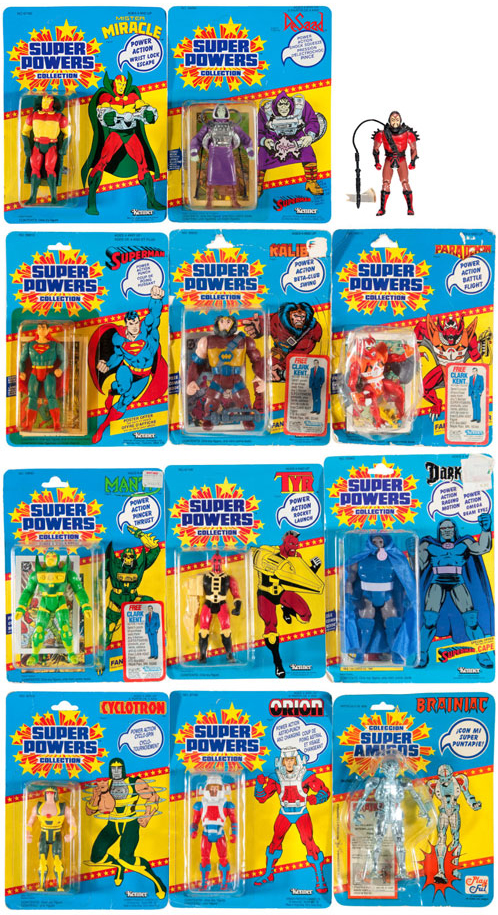 7×9.25″ blister cards contain 4 5/8″ tall figures with accessories and arm action when legs are squeezed together. Kenner. ©1986 DC Comics, Inc. figures are on various issue cards. Superman is a 12 back card and Mister Miracle is a 33 back card. This lot is heavy with Kirby’s Fourth World characters. Lot includes Mister Miracle, Tyr, Superman, Brainiac (Super Amigos), Orion, Cyclotron, Mantis, Parademon, Darkseid, DeSaad, Kalibak and Steppenwolf (mail away figure). Cards are bright and glossy overall. Cards have moderate aging/handling wear, with Parademon having some overall creasing and crushing to blister. Most cards range from Good to Fine. Tyr and DeSaad are unpunched Exc. Three cards have Clark Kent mail away offer sticker. Figures are Mint as packaged. 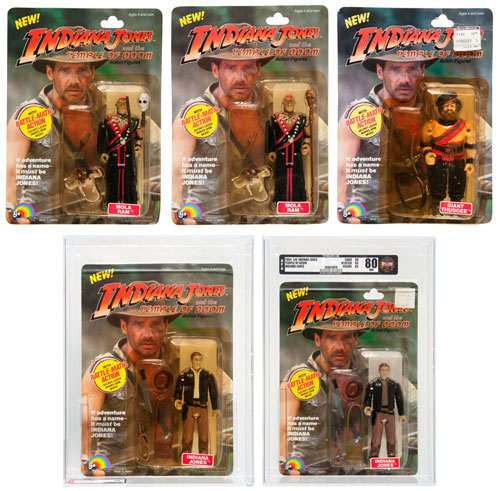 “INDIANA JONES AND THE TEMPLE OF DOOM” FIGURE SET OF FIVE BY LJN.

©1984 Lucasfilm Ltd. 7×10 blister carded action figures. First is AFA graded 80NM Indiana Jones with brown shirt variation. Next is AFA graded 70 EX+ Indiana Jones with white shirt. Third is Giant Thuggee with yellowed blister. Card has some overall creasing and puncture on back side of figure. Fine/VF card with Mint figure. Next is Mola Ram with golden staff and knife variation. St. yellowing on blister and lt. warp on card. Card is VF/Exc. with Mint figure. Last is Mola Ram with painted staff with white skull. St. yellowing on blister and lt. wear on edges of card. Card is VF/Exc. with Mint figure, however staff has snapped in two inside of blister. Card backs show illustrations of the never produced Short Round and Willie Scott figures. Much harder to find figures than the Kenner Raiders Of The Lost Ark figures. A great instant collection.

[All images and text reproduced with permission from Hake’s.]