The latest auction from Hake’s is going on now, and as usual, there is an incredible assortment of vintage toys up for bid. Here are some of my favorite items… 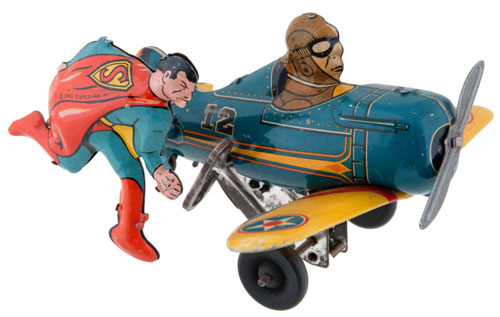 5.5x6x3.5″ tall tin litho toy w/built-in key © 1940 Superman Inc. on Superman’s cape. This toy was issued w/three different colored planes, this has primarily blue body while the other varieties are red and gold. Plane is designed w/pilot figure and attached to the tail by a rod is a separate 3″ tall figure of Superman. Toy is designed for the plane to travel forward a short distance before the Superman figure flips the plane over 360 degrees and then repeats this cycle. Toy works well. Toy has overall scattered tiny paint nicks from general use. This includes both sides of Superman figure which has scattered small spots of paint wear and color rubs with some tiny scratches across “12” on one side of plane body. Overall appearance remains bright and glossy w/no serious defects. A Fine example of this scarce and classic wind-up. 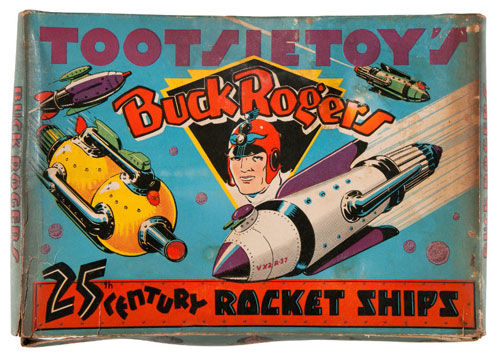 8×11.5×1.5″ deep box contains complete six-piece cast metal set of four ships and two figures. © 1937 John F. Dille Co. Great box art features scene on lid of Buck portrait at center surrounded by rocket ships flying through space, two side panels feature different Buck character portraits. Box lid has two corner splits 3 to 4″ splits along top of front side panel. 1″ tear at front right. Top of lid has concave areas and sides of top show moderate age tanning. There are also a few areas that show surface paper loss, mostly on edges. Box bottom insert shows aging in the form of spotting of the orange color. Box is overall Good w/great color and graphics. Each ship is 5″ long, three are Buck Rogers spacecraft while the fourth is an airship. Ships are “Flash Blast Attack, Venus Duo-Destroyer, Battlecruiser, U.S.N. Los Angeles.” Top of each is designed w/pair of pulleys where they were to be attached to a length of string. Comes w/original string wrapped around separate cardboard piece at center of box insert. The other two pieces of this set are 1.75″ tall figures of Buck and Wilma. Buck has a few stress lines and small traces of paint wear but 85% remains. Wilma has scattered paint wear w/about 85% remaining. The “Battlecruiser” has 100% paint. NM. The other three have scattered paint loss- Los Angeles around one tail fin, Flash Blast Attack is VF on one side and VG on other. Venus Duo Destroyer is Fine on one side and VG on other. Still a presentable set to display. One of the rarest and most desirable of all Buck merchandise as well as a key item for Tootsietoy collectors. This is the only the second time we’ve ever been able to offer this rare set in our 46 years.

Copyright 1945 John Dille Co. Made by Puzzle Craft Industries. 8.75×11.25×5/8″ deep thin cardboard box has lid art of Buck blasting a robot. Set came in two different lid versions, both had same art but slightly different color schemes. This one has green banner across bottom. Each cardboard puzzle is 8-3/8×11″ with art by Dick Calkins. One features Buck in his rocket ship and the other two have him battling aliens. Box lid has dust soil with a few bits of missing surface paper at bottom edge and around side seams. One corner seam is split. VG. Puzzle with Buck in rocket ship has spots of paper loss at two places. Fine. Other two are VF. All are complete. Extremely rare as a complete boxed set. Few examples of such are known. Superb graphics throughout. 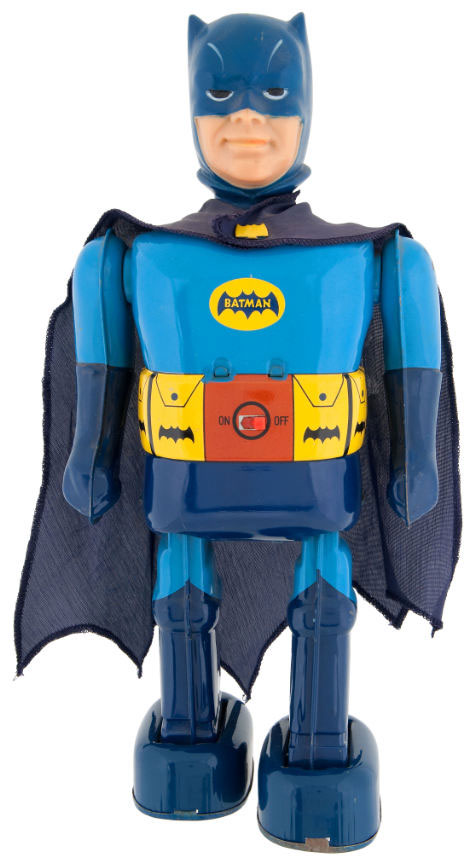 [Photos and text reproduced with permission from Hake’s]