I had a fun weekend filled with vintage toy hunting and comic books — there are certainly worse ways to spend a couple of days. On Saturday morning, I went to a “Baseball & Sports Card Show & Comic Book & Nonsports Card Show” put on by Shoff Promotions. Earlier this year, I went to the DC Comicon, which was quite a different beast than this show. This one was a nice calm, sedated affair with soothing ambient lighting and a bunch of old dudes like me — my kind of comic show!

I don’t typically walk in the comic book collecting circle, and the only reason I heard about the show was though a bunch of posts on CraigsList for LEGO and minifig collectors. LEGO is a pretty big deal in my household, so I took it upon myself to conduct some research and go seek out the toys. Here is what I found… 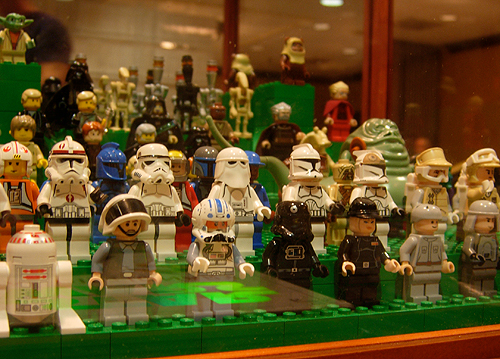 Classic Plastic Bricks brought a great assortment of minifigs and LEGO sets, ranging from Star Wars to cowboys, and their prices were really good. I spoke with the owner and his wife (who also had an adorable little one in a walker) and was happy to hear that the collector base for LEGO minifigs is growing by leaps and bounds — not a real shock to me, since I have two boys, and know how fiercely they snatch up those figures. This is one collecting area that I have been watching closely. I’m still on the fence as to whether LEGO is going to overproduce the figures to the point where nobody cares anymore. Minifigs are hot, no doubt, and I would love to see display cases full of them at collector events 20 years from now. They are the perfect collectible — small, inexpensive, and there are some rare ones you need to hunt for.

I also enjoyed these guys, and may have to try building that Mr. T:

Of course, one of the big draws for the show was the comic books. There really weren’t too many vendors, maybe five or six, but a couple of them were chock full of gold- silver- and bronze-age goodness. I saw some comics that I have only seen on high-end collector sites, and I was able to browse through long boxes filled with vintage titles.

Gene Carpenter of All-American Treasures had these great comics on display along with plenty of boxes of pulpy-goodness to browse. 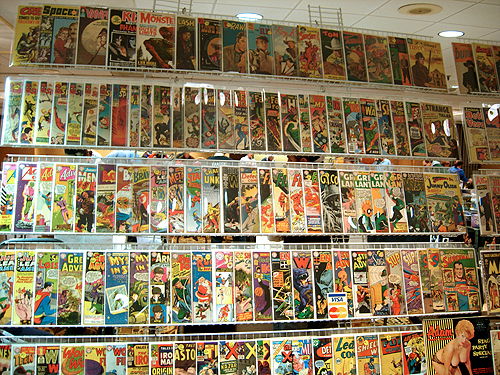 If you read my blog, you know that I tend to buy the smallest, cheapest things I can find when I go to shows like this, and this show was no exception. I just don’t like spending a lot of money in a high-pressure setting, sorry. Tomorrow’s Treasures had some truly unbelievable comics for sale. I can only dream about those, but luckily for me, they also offered stacks and stacks of older comics at a reasonable price. The three dollar table was my best friend — all comics for $3 a piece. That is where my money was spent at this show. I proceeded to find probably the most worthless books, but ones that appealed to me and my spaceman obsession: 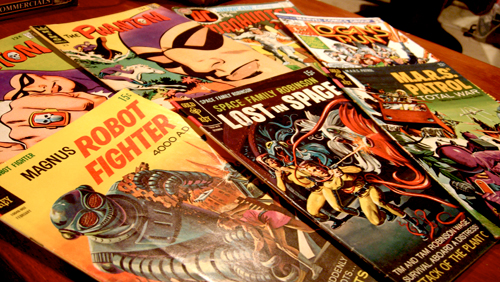 I know absolutely nothing about these comics, other than the fact that I really like the covers. Does that make me a bad collector? I DO remember absolutely snubbing Gold Key comics as worthless when I was a kid, but I’ve “matured” since then.

The were lots of sports card vendors, and it appears that was the biggest draw. I had trouble finding many non-sports trading cards, and would have loved seeing some vintage movie or TV cards, but they just weren’t there. There was a single coin dealer, and I actually bought something from him for my son. I was such a fish out of water, not having a clue what to look at, or if there was proper etiquette for handling the items, but had a good time regardless.

I’ve been to two comic book shows this year, making a total of two shows in the last 20 years. This kind of setting will be the kind of show I would attend again. Who knows, maybe I’ll start collecting comic books again — I’ve been known to collect a few things in my day!

Anyone else have any good advice or tips on attending shows like this? What makes you keep going back (or staying away)?