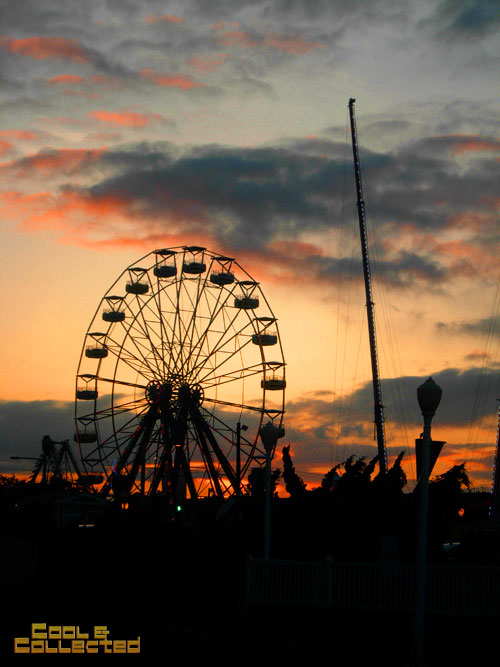 To me, vacations are a time when one must seek out the most juvenile, fun, tacky, cool experiences that you just can’t get at home. Last week, the family hit the road for a quick trip to Virginia Beach. (I’ve owned my own graphic design business for almost 20 years, so any vacation is usually a quick one.)

Our trip  included a stop in Colonial Williamsburg (not much pop culture there!) and Bass Pro Shop’s Outdoor World, which is always a fun place to get out and stretch. This fella was ripe for fun photos–if you’re on my Christmas card list, you’ll probably see the kids posing with this guy.

Virginia Beach is nowhere near as tacky as many beaches, and is actually pretty family-friendly and clean. There’s a small midway with a few rides but for the most part, the entire beachfront is made up of hotels. The t-shirt shops and pizza places are one street off from the beach, so you can’t even see them from the sand, which makes it a really nice beach!

We spent half a day at Motor World, where, being a Wednesday, we had the entire park to ourselves. We actually had to track down employees to fire up the go-carts and rides. I felt like Clark Griswold at Walley World — it was awesome!

What wasn’t awesome was the arcade. Realize, I grew up in the age of video game arcades, and stepping into an arcade now always brings back a wave of nostalgia. I wanted my kids to experience how great an arcade could be, but after three of the machines ate our tokens (and not an attendant to be found) the allure quickly wore off. My oldest son was soooo bored by the 45-second games that ate his money, that we didn’t stay long. (But I am proud of the fact that his favorite game was Pac-Man.)

One of our afternoons was spent at Jungle Golf, which had an appropriate number of fiberglass animals and steam-spewing volcanoes. 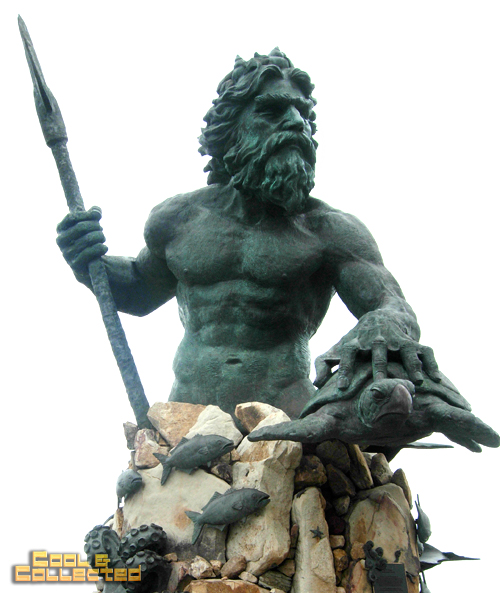 The ENORMOUS Neptune statue is a fairly recent addition to the beachfront and is not nearly as tacky as I might like, but it is impressive and a great place for a family photo-op.

Of course, the highlight of the trip for me was spotting this gigantic King Kong statue on the way into the Ocean Breeze Water Park. No joke, drinks were spilled as I slammed on the brakes and jumped out of the car for this picture. I only wish I could have been in the photo, but the honking people behind us on the road were already starting to lose their patience with me. This was one of those serendipitous finds that can absolutely make a summer vacation. Seriously, if I knew this statue existed, I probably would have planned a trip to Virginia Beach just to see it! It was magnificent, and I want one in my backyard. I wonder of the HOA would allow that.

A few of my fellow League of Extraordinary Bloggers members have written about summer vacations as well. Be sure to check them out. Stunt Zombies, Pop Rewind, Diary of a Dorkette, and more!