I’ve been hearing about the York Toy Extravaganza in York, Pennsylvania for a few years now and this is the year I finally made the trip. On Sunday morning, I hit the road at 6:30AM, which is an ungodly hour for a holiday weekend, but I was a man on a mission. 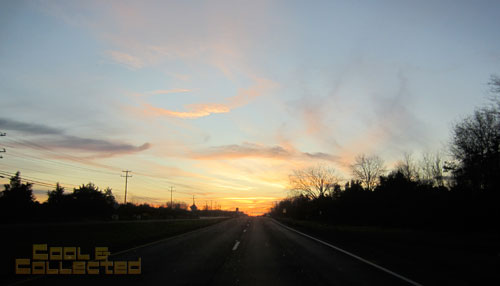 York, PA is about 100 miles from where I live, but the drive was uneventful and kind of nice since no one else was on the road. However, I did manage to find the one gas station restroom where all the hobos must go to clean themselves. I’m still trying to scrub that memory from my brain.

Can you hear me now?

I arrived at the York Expo Center at a little after 9:00 and had to park far from the doors–this was apparently the place to be Sunday morning. I was planning to meet Todd Sheffer from Hake’s Americana, at the show and when I reached into my pocket, I realized I left my cell phone at home. Have you ever been 100 miles from home without a cell phone? A mild bolt of panic set in as I realized that pay phones no longer existed, and I couldn’t call Todd to ask him where he was. First world problems, I know, but I was screwed. I rarely even use my cell phone, but knowing that I was without it was unsettling, to say the least.

As luck would have it, I recognized Todd in the crowd from his Facebook profile picture and all was right in the world again.

The two of us roamed the aisles of the show, which was absolutely overwhelming. I think there were over 800 tables of toys, with a majority of them being dedicated to diecast cars and trucks (those were the easy tables to skip). It was fun looking at all the items with a fellow collector (more on Todd’s collection later). We pointed things out to each other that I’m sure we would have missed had we been there alone, and I learned a ton from Todd who lives and breathes vintage toys and collectibles.

I’ve never been to a show this large that was solely devoted to toys, and I got a kick out of seeing all the other collectors and observing what caught their eyes. For the most part, I don’t think there was all that much high-end stuff, but some of the prices sure were high-end. I fully expected to drop a few hundred dollars at this show, but got off fairly cheap. The gas bill for the trip was actually higher than what I ended up spending.

Toy shows like this are a great way to learn about items you already own and to find items you never knew existed. I found a fuzzy King Kong shampoo bottle which was identical to a bank I just bought on eBay last week. I’m still regretting not buying it but I came across it early in the day and didn’t want to blow the wad so early. You can bet I will be searching for that bottle on eBay for years. I also saw a Marx windup gorilla in its box, but the seller wanted $295.00, which is way more than I wanted to spend on a single item.

If you asked me to tell you what was popular at the show (besides cars) I honestly couldn’t tell you–the variety of items was huge, but most dealers were all over the place in what they were offering. However, the Amazing Toy Shop’s

table bucked that trend and offered an excellent selection of 80’s carded action figures. Here are some photos of their table… 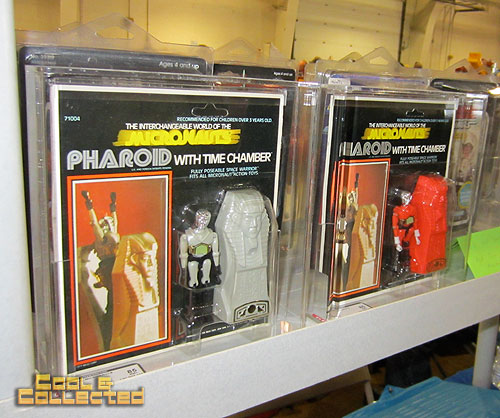 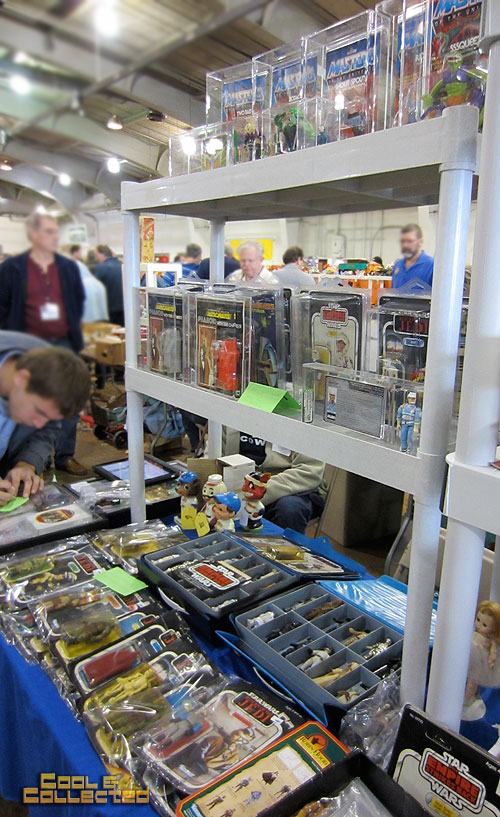 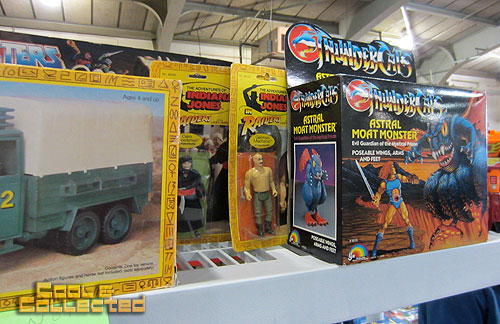 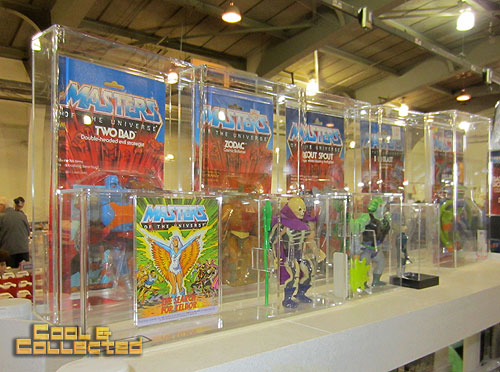 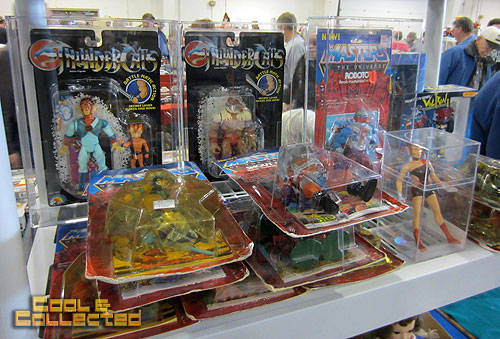 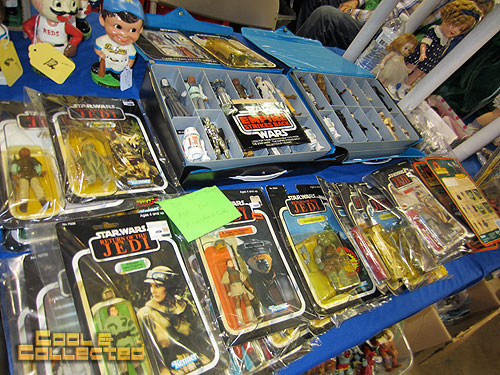 ” so check them out if you want some high-end vintage action figures.

To be honest, those photos represent what I was expecting to see at the Toy Extravaganza–lots of mint condition items displayed in a clean, orderly manner–but the reality was quite different. There was a flea market feel to most of the tables and you could dig through bins and boxes, but it was so crowded, this wasn’t really convenient. I’m sure there were plenty of treasures that never even made it to the tables.

I was really surprised at how few Star Wars, G.I. Joe, and other 80’s toys there were for sale. I would have expected those toy lines to have been a dominant presence, but if you went to the show solely for those items, you would have had a tough time finding them. Come to think of it, I don’t remember even seeing a G.I. Joe vehicle.

My favorite item at the show

In my opinion, the best item at the show was probably this vintage display for Lunar Bugs. The bugs at the top rotated around on a motor. The price tag showed $550.00, but a guy can dream. 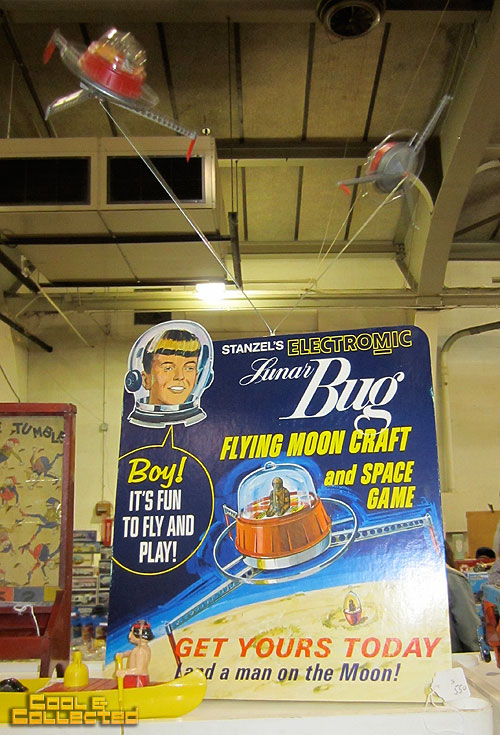 The Art of the Deal

Unless I am dealing with a seller who I know, or if an item is priced incredibly well to begin with, I will typically try and ask for a better price. I think most dealers expect this and price their items accordingly. There is a dance to negotiating a price, and while some people are good at it, others need to take a few more lessons. At one table, I had selected a couple of old magazines and a Planet of the Apes record, all together priced at $22.00. I asked the seller if she would take $20.00 for the lot, and she flatly said no. “You won’t drop two dollars off the price if I buy three items?” I asked. Nope. Well, there are three items that I left behind at that table just on principle. Yes, sellers have the right to deny a sale, but as a buyer, I will remember that vendor next time around.

There was another item I almost bought. It was a large General Ursus bank from Planet of the Apes, something that I have been looking to find for a while, but the top of the head was broken where the coin slot was, so unless I could get it for a steal, I wasn’t interested. The dealer, who was dressed as Elwood Blues, was asking $50.00, to which I winced and turned away, saying that we were so far apart I wasn’t even going to pursue it. He asked what I was willing to spend, and I told him I would only go as high as $10.00. He thought about it a looong time, but wouldn’t commit. I know he would have sold it for $15.00, but I really didn’t want it for that much since it was broken. I left that bank behind, but knowing I could probably go from $50.00 to $15.00 tells you something about the mentality some of the dealers have.

Overall, the dealers I dealt with were incredibly nice and willing to negotiate. I even got to say hello to a couple of the regular sellers from the DC Big Flea, which was a nice surprise.

The One that Got Away

There’s always an item you regret not buying after a show like this. For me, I think it would have to be a set of three Universal Monsters soaky bottles — Wolfman, Creature, and Frankenstein — and they were priced pretty well at $150 for the set. I noticed a few cracks and glue marks, on all of them, which made me hesitate. The seller was there with his young daughter, and I HATE to negotiate when a kid is around, so I walked away (but I’m still thinking I should have gone back).

There was actually one other item that I was really interested in, but apparently I found the one item at the show that wasn’t for sale. There was a lady who was using old wastebaskets to hold up her shelves (think milk crates and boards). One of the waste cans was a sweet Six Million Dollar Man can with awesome graphics. I had to ask, but I knew the answer before the words even came out of my mouth. The shelves were piled high with old trains and tin toys, several levels high. There was no way she was going to dismantle her display for that one trash can, but now I have something else to look for on eBay.

Since this was my first experience at the Toy Extravaganza, I think I played it a little too safe, and didn’t want to buy one thing because I was sure something even better was waiting for me a few tables away. But, I wasn’t going to drive a hundred miles and not buy anything, so of course I brought home a few toys. Stay tuned and I’ll show you what found its way into the trunk of my car.

A special shout out to my fellow bloggers over at Weirdo Toys and The Surfing Pizza for convincing me to go to the show. They both have written about the Toy Extravaganza in the past and may write about it again this year. (If they don’t have posts about this year’s show, you can always read about last year’s!)