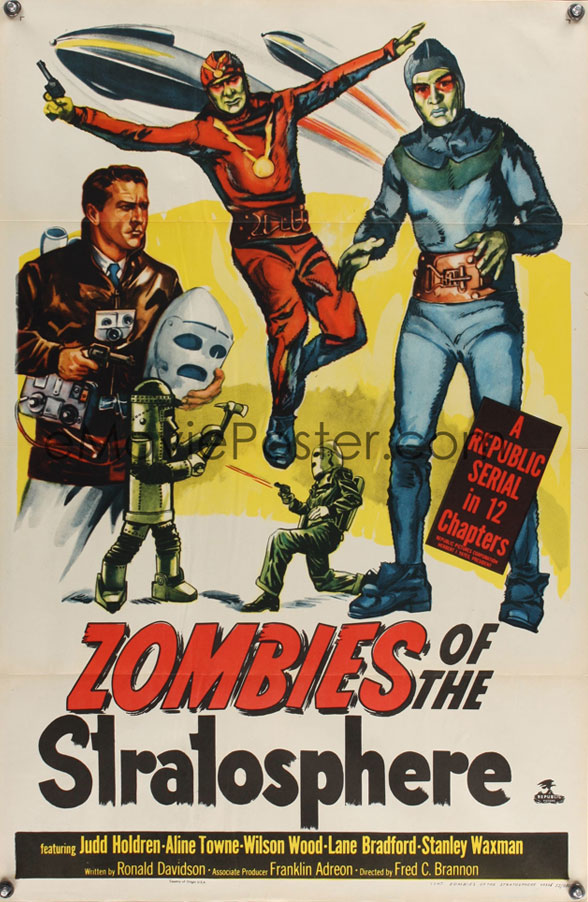 Who knew zombies were popular in 1952? This incredible poster is up for auction this week at emovieposter.com. Zombies of the Stratosphere was a Republic Serial with 12 chapters. I am an absolute sucker for Republic movie posters, and this is a great one – zombies, spaceships, a robot a with fireman’s axe – I think I’m in love.

Apparently the title is a little confusing as there actually aren’t any zombies in the movie, and zombies aren’t even mentioned until the last chapter! IMDB has some fun facts about this serial:

“Zombies” utilized stock footage from various Republic serials, features and one western; all of the 17 flying sequences of the airborn-wired dummy came straight from “King of the Rocket Men.”, and the uranium-smuggling airplane sequence was lifted from the Roy Rogers western, “Bells of Coronado,” which is why Clifton Young (as Ross)and Henry Rowland (Plane Heavy)show up in this serial. Larry Martin’s space ship was recycled from “Radar Men from the Moon”, while the Martians flew a new model (created for “Zombies”)that featured a transparent bubble-gum turret housing a ray cannon atop the fuselage.

So, if you want some cheese with that box of Ritz crackers you’re munching, this movie sounds like it would certainly fit the bill.

Image reproduced with permission from emovieposter.com.