I think EVERY neighborhood in northern Virginia was having a community yard sale this past weekend. I had to rush through our neighborhood, and then hit a local comic book shop for Free Comic Book Day on our way to an overnight camping trip. It was exhausting but fun, and here are the treasures I was able to find among all my neighbor’s trash…

Not a bad day’s haul. I found a Teenage Mutant Ninja Turtles Collected Book Volume 1 and Art Spiegelman’s “Maus” for 50 cents each, and a stack of Conan paperbacks for another 50 cents. I also bought a stack of Dragon magazines from the late 70’s and early 80’s for $3.00. Single issues can fetch $10-20, so I’m excited about those.

That big red box in the picture is a 1949 Erector Amusement Park set. It’s in rough shape, but I haggled the price down to $15 and can’t wait to put it together. I’m sure it will be missing vital components, but it has a ton of pieces. An Erector set like this one

I have been on the lookout for older Larami Super Soaker guns after seeing how much they sell for on eBay. This is the kind of thing you always see at yard sales and ignore, but certain guns can sell for over a hundred dollars! I found a Limited Edition Super Soaker 50 for a quarter. A similar gun recently sold on eBay 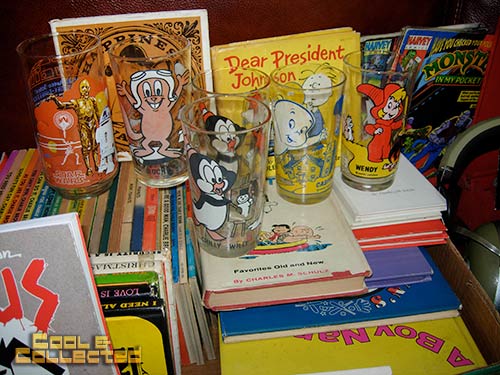 I really, really didn’t want to buy these collector glasses, but I felt it was my duty to save them from the garage I found them in, so I plunked down $1.50 and brought them home. Now I need to sell them before I break them. Another good score for the day was a box of Peanuts books from the 50’s and 60’s. These were owned by a guy who managed to hold onto them since his childhood. Overall, they are in pretty good condition and I think I’ll be able to easily make a profit on my $20 investment. 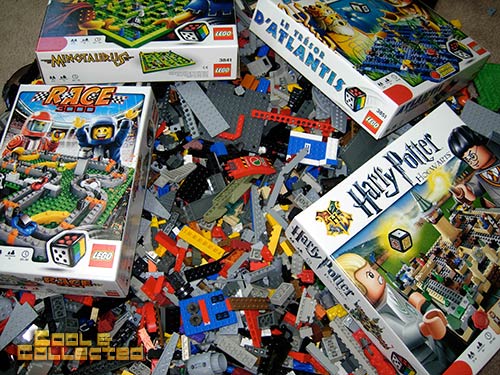 Legos! A good yard sale is one where you get a 25-lb. bin full of loose pieces for $20. There were a few select pieces that made the bin entirely worthwhile, including some Bat-signal wheels from a Batmobile set, and the glass cockpit cover from a Millenium Falcon, which could almost cover the cost of the entire bin. I also picked up four Lego board games for $7. These games aren’t all that much fun to play, but the Harry Potter game is is starting to get some traction as a collectible.

Note to seller: these are NOT Legos. This big box of Playmobil figures, buildings, and accessories was a steal at $5.00. Never pass up a Playmobil lot at a yard sale.

Not too shabby for three hours of hunting! This is the time of year when my cave starts to look like an episode of Hoarders–I need to keep the products moving in the other direction too, or I’ll be buried in all this great “junk.” Come to think of it, would that be so bad?

Anyone else have any luck this weekend? What’d you get?