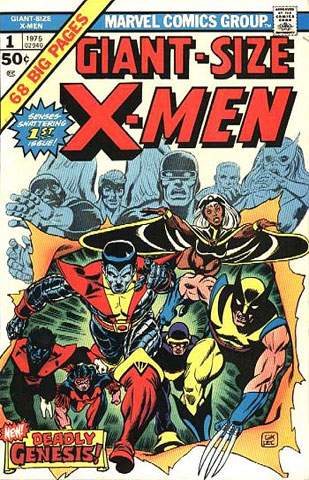 It’s a given that most readers of this online magazine [Comics Bronze Age] are fans of Bronze Age comics. Collectors of other eras might look down on these books as unworthy, and “civilians” probably dismiss them altogether as silly, childhood ephemera. But, for us true believers, there’s little doubt the Bronze Age provided the greatest treasures.

Of course, there’s one hitch that plagues that proposition: What exactly is the Bronze Age? Unlike the Golden and Silver ages, there’s little agreement about when exactly the Bronze Age started, and even less about when it ends. “Comics from the ’70s” is agreeable to most, but that still leaves comics from the ’80s. The Overstreet Comic Book Price Guide defines the period as “comics published from 1970 to 1984” (that’s also the rough definition currently used by this magazine). Online powerhouse eBay ends the Bronze Age at 1983, while MyComicShop.com extends the period to 1985. Wikipedia, meanwhile, goes with the very hedgy “informal name for a period in the history of mainstream American comic books usually said to run from the early 1970s to the mid-1980s.” It would seem our hobby has adopted a definition for the Bronze Age similar to Supreme Court Justice Potter Stewart’s definition of obscenity: “I know it when I see it.”

While exact starting and ending points are certainly elusive, Comics Bronze Age believes a more concrete definition for the period is possible. Over the next couple of months, the Talking Points area of this site will seek reader input and look to build consensus on this topic. The end result, hopefully, will be an online resource that answers the following question: What is the Bronze Age of comics?

To kick things off, here is a brief sketch of how this magazine currently sees the Bronze Age. Note that there are both business and creative dimensions driving the shift between ages. Hopefully, robust conversation throughout the summer will help sketch out and expand this framework:

1968: THE PRE-BRONZE PERIOD: On the business front, Marvel finally frees itself from the restraints of a distribution deal with rival DC and rapidly expands. On the creative side, Neal Adams’ DC work (on both Deadman and the Batman franchise) and Jim Steranko’s Nick Fury, Agent of SHIELD look nothing like Silver Age comics, and serve as prototypes for the era to come.

1970: THE BRONZE AGE BEGINS: The new decade starts with a seismic event within the comics industry: Jack Kirby leaves Marvel for DC. Does this make Fantastic Four #102 (Kirby’s last as regular penciler, cover dated Sep. 1970) the signpost for the end of the Silver Age, and Superman’s Pal Jimmy Olsen #133 (Oct. 1970) the first Bronze Age comic? Or does that latter honor go to Green Lantern #76 (Apr. 1970), the first issue by legendary creative team Denny O’Neil and Neal Adams? That run provided the first breakout hit of the Bronze Age, and the debut issue has become one of the most sought after books of the era.

1975: THE RISE OF THE X-MEN: While the Bronze Age was clearly already underway by this point, the importance of the reintroduction of Marvel’s mutants in Giant-Size X-Men #1 (May 1975) must be noted. Within five years, the X-Men’s regular series, which returned with #94 (Aug. 1975), would provide the benchmark all others would be compared to – both creatively and in terms of sales.

1981: THE POST-BRONZE PERIOD: The emerging direct market creates a demand for more product. Pacific Comics is the first to step to the plate, offering Jack Kirby’s Captain Victory and the Galactic Rangers #1 (Nov. 1981). Soon, other publishers like First and Eclipse join PC in offering books that offer a mix of ground-level and mainstream sensibilities, and better deals for the creative talent. The Big Two would eventually follow suit.

1985: THE BRONZE AGE ENDS: With the publication of Crisis on Infinite Earths (starting in Apr. 1985), DC literally ends the Bronze Age (and all previous ages, too!) The series offers a clear cut with the past, allowing much of the company’s line to be relaunched the following year. Over at the competition, Marvel Super Heroes Secret Wars has a more traditionally Bronze sensibility, but the final issue (#12, Apr. 1985) does offer a good end point for Marvel’s Bronze Age. Does that mean Comics Bronze Age should be “celebrating comic-book goodness published from 1970 to 1985”?
————

For more great articles and discussions on comics of the Bronze Age, head over to our friends at Comics Bronze Age.