There are so many incredible items up for bid over at Hake’s this week, but if I could buy just one thing, I think it would be the complete set of Mars Attacks trading cards. Hake’s has a bunch of trading card sets in their current Auction #203, and they all make my Garbage Pail Kids collection look pretty meager. I’ve posted a single image for each of the card sets below, but do yourself a favor and click through to see the entire sets. They are amazing. 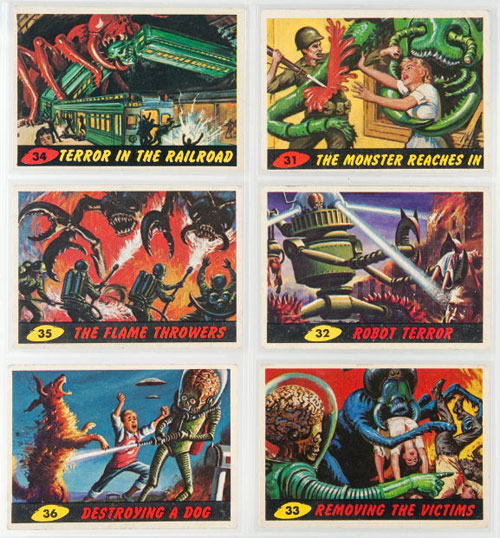 “MARS ATTACKS” TOPPS GUM CARD SET
Set of 55, each 2.5×3.5″ issued in 1962 © Bubbles Inc. (Topps). Card fronts feature choice art, in many cases quite gruesome such as #36 “Destroying A Dog” in which an alien disintegrates a dog w/his ray gun and #50 “Smashing The Enemy” in which a U.S. soldier splits open an alien’s head using the butt of his rifle. Card backs are bw/orange featuring story text plus preview image of the following card. Final card in the set #55 features “A Short Synopsis Of The Story” on front while back is a check list. This card reads in part “Planning To Conquer The Earth, Mars Sends Flying Saucers Through Space Carrying Deadly Weapons. Burning Cities, The Martians Destroy Much Of Earth’s Population.” Checklist card is unused. Moderate margin aging/corner tip wear. Very faint crease on front but does not go through entire card and is mostly only visible in reflected light. VG. The remaining 54 cards have typical margin/corner tip wear/aging but all remain clean and are free of creases. About 10 cards are Exc./NM with the rest in overall VG/Exc. to Exc. condition. One of the all-time classic gum card sets. All cards shown online. 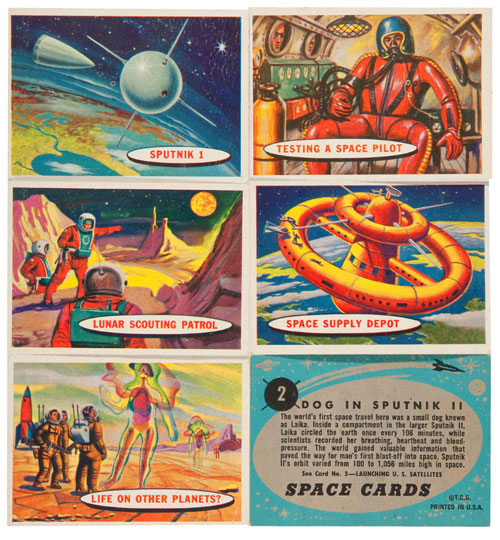 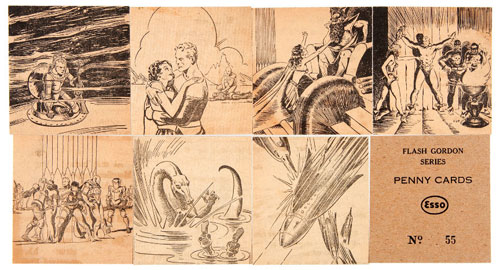 FLASH GORDON GAS PREMIUM CARDS EXTENSIVE LOT
Lot of 131 different. 1930s. Each is about 3×3″ and cards in this series feature actual picture panels from Big Little Books which have been mounted to same size cardboard sheets. These were produced for a number of different characters including Mickey Mouse (see display sign item #2983), Dick Tracy, Phantom and others. Sold in vending machines as well as offered as gas premiums. Flash is featured on many cards, along w/a host of friends, foes, space creatures, rocket ships, etc. Great assortment of images from at least two different BLB’s. Each reverse has text “Flash Gordon Series/Penny Cards/Esso” along w/card number. It appears as though pictures were randomly applied to the card backs w/no real semblance of order as there are 13 duplicate card numbers in this lot but no two BLB pictures are duplicated, therefore all are different even though there are these duplicate numbers. Card numbers are: 2-5, 7-46, 48-77, 79-88, 90-121, 123-124. The duplicated card numbers are: 101-103, 107-109, 113-115, 117-120. Typical aging as mounted but overall cards are still NM w/sharp corners. While we have offered small groups of these cards in the past, this is far and away the largest group we have ever seen/offered. 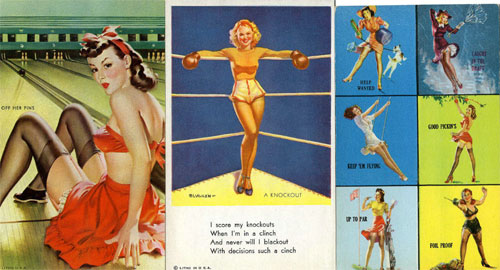 MUTOSCOPE PIN-UP CARDS: THE ULTIMATE COLLECTION (496 CARDS)
This is an extraordinary offering, the most complete and definitive collection ever assembled. In total there are 10 different, complete Mutoscope sets including many variants, in addition to two other related sets, for a grand total of 496 cards in this lot. All are 3.5×5.5″ featuring exceptional pin-up art by the likes of Earl Moran, Gil Elvgren, Billy DeVorss, Rolf Armstrong, Peter Driben, Mabel Harris, Al Buell, Earl Christie, Edward D’Ancona, and more. Here are the basics of what we are offering concerning the Mutoscope cards in this lot: Glamour Girls 1940 set of 32, All American Girls 1941 set of 32 plus 8 variant cards, Yankee Doodle Girls 1942 set of 32 plus 3 variant cards, Hotcha Girls 1943 set of 65 plus 64 variants, Follies Girls 1944 set of 32 plus 1 variant card, Artist Pin-Up Girls 1945 set of 64, Calendar Girls Series 1 1950 set of 32, Slick Chicks 1950-1951 set of 32, Calendar Girls Series 2 1952-1954 Series 2 set of 32 plus 2 variants, Slick Chick Twins 1952-1954 set of 32. In addition to this there are two unrelated postcard sets from the 1940s featuring “Good Girl” art that make a nice complement to the Mutoscope cards. One is a set of 15 identified by “DG” numbers, the other is a set of 18 identified as “Glamour Girls” and numbered as “GL” (with all art by B. Armstrong), both are issued by Tichnor Quality Views/Postage Stamp Machine Co. Condition across the board is high-grade, mostly NM/Mint. A complete and detailed list of every series, card and variant as well as expanded condition notes available online, or contact us for a physical list if desired. Online you will also find a very detailed and informative account of how this collection was assembled by the consignor. As you can imagine, this was no easy task. What we are offering here is the ultimate collection that can be acquired intact as assembled. What took our consignor decades to assemble can be yours with one bid. 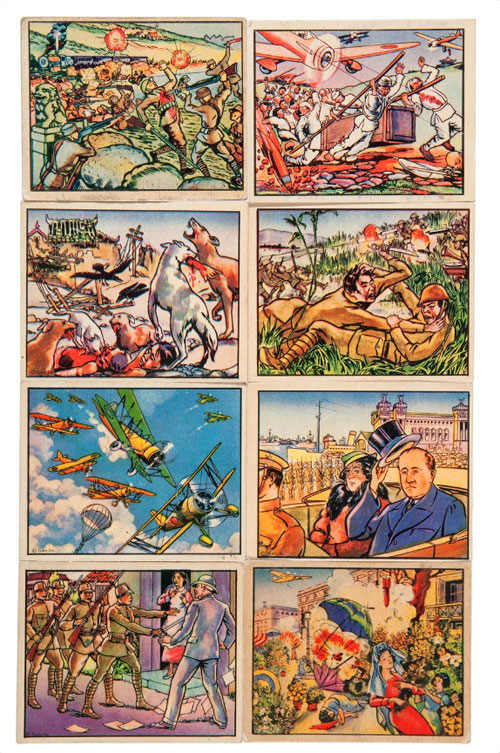