The long awaited and much anticipated Toy Hunter premiere finally arrived. In this premiere episode, show host, Jordan Hembrough, is hunting for toys in his own backyard on the Jersey Shore. his first stop is with a collector named Andrew, who has a shed filled with totes stacked to the ceiling. It doesn’t take Jordan long to dive in to see what treasures lay within those plastic bins. 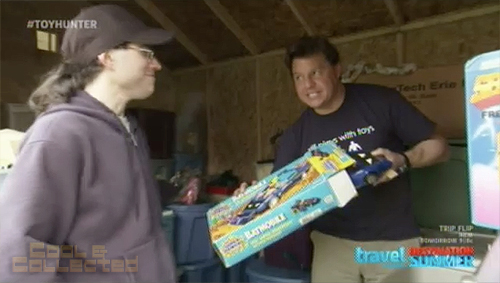 sets from pop culture’s past, including sets from Mork & Mindy, Star Trek, and Welcome Back Kotter. Jordan buys them all for around $5 each — a great price! He also unearths a 1975 Mego Cher doll, but it’s not in the greatest condition, so he leaves it behind, but snatches up a boxed Kenner Super Powers Batmobile 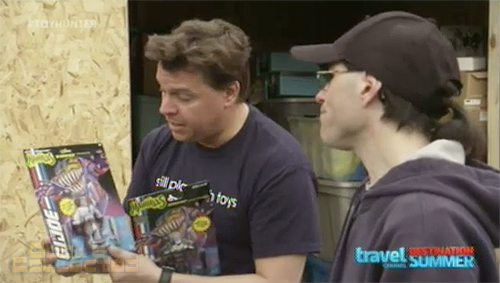 Probably the coolest item he finds in Andrew’s shed is a collection of G.I. Joe Manimals

. These figures are hard to find and Andrew wants $750 for them, which is too steep for Jordan. 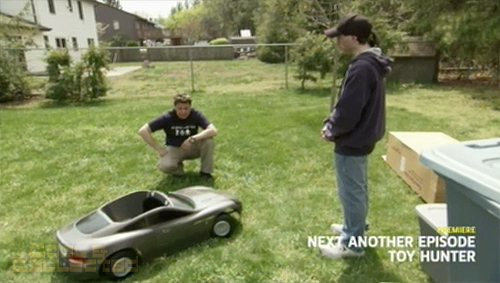 There’s one more item in the shed that Andrew wants to show off — an Aston Martin Vanquish pedal car made by Thermtech Erie, which was a 7-Up promotional item for the James Bond movie, Die Another Day. Jordan and Andrew can’t agree on a price, since Jordan will only go as high as $225, so it stays in Andrew’s shed. I’ve never seen one of these, but after watching the show, I found one that sold at Bonham’s auction for around $750. 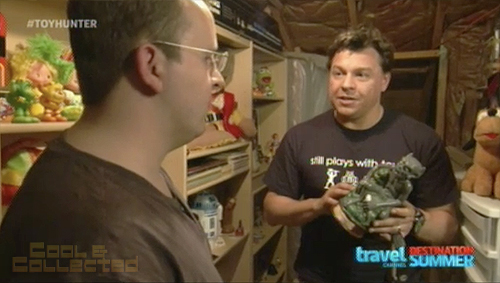 Jordan heads south to Toms River, NJ, and visits a die hard Star Wars fan named Brian, who has had his collection relegated to the rafter space in his attic. Jordan buys a couple of GoBot Roguns, but I got more than a little excited at the next item he found–a Gollum bank from the 1978 Ralph Bakshi Lord of the Rings movie. Toys from the 1978 film are hard to find and can be worth quite a bit of money. Jordan bought the bank for $60.

Buried in the dark depths of the attic, Jordan finds an amazing 1983 Star Wars Return of the Jedi speeder bike pedal car

Apparently, Jordan has his very own “Danielle.” Jordan’s lead generator is named Julia, and she calls with information about a collector that Jordan just has to visit.

Curt is an older guy with older toys, so I sat up and paid close attention, not just to what he was showing Jordan, but to all the amazing stuff that was in the background. I could have dropped a LOT of cash in Curt’s basement. Jordan finds an original Mr. Potato Head toy in the box, but passes because it’s too old! He does buy a Mr. Machine

Curt has a true treasure (and one of my personal holy grails) hiding under a sink. It’s a 1979 Kenner Alien figure

with the always elusive clear plastic dome. This toy was recalled because it was deemed too scary for kids, which makes it highly prized by collectors. Curt won’t sell it for any amount, and who can blame him! 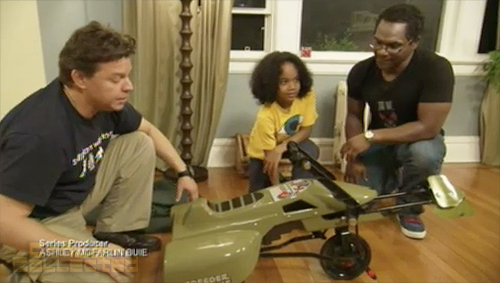 The show ends with Jordan visiting a Star Wars collector he knows and he tries to sell him the speeder bike pedal car for $1,500. They settle on $1,000 and Jordan is probably thrilled he doesn’t have to store that thing–it’s huge!

I really enjoyed the show and learned about toys I never knew existed. I think Jordan’s prices were what you would expect from a dealer, and actually higher in some cases. It’s really no different than other reality shows such as American Pickers or Pawn Stars–a guy’s gotta eat, right? I’ll continue to be Toy Hunter’s number one fan until Jordan lowballs someone on a vintage Marx windup gorilla.