I am blessed with two wonderful sons who are just getting into superheroes and action figures. After watching the Avengers cartoon and seeing all the hype for the upcoming movie, my youngest started carrying around an Iron Man action figure (which just warmed dear old dad’s heart). The other day he told me that Iron Man wanted a friend. Of course I jumped up, grabbed the keys, and we headed straight to Target. 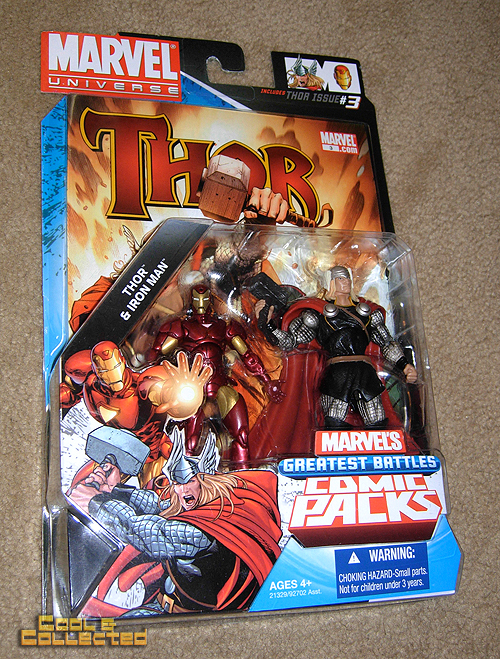 After looking over the vast array of super hero toys, my son decided he wanted an Iron Man figure, even though he already had one. I was fine with that, so we continued our search to find a figure for his big brother. I saw this awesome Comic Pack with not just one, but TWO action figures–we could get Iron Man and Thor–a perfect solution. I balked a little at the $18.00 price tag, but it was for two figures, and a comic book, so it seemed to be a fair price.

We got home and I opened the packaging and was impressed by how great the figures looked — highly detailed for such a small toy, and great paint — action figures have certainly come a long way since I was a kid. I had barely finished handing Iron Man to my son before the figure’s leg fell off. Seriously, it was less than three seconds before the amputation occurred. I thought it must have been broken in the package, but after looking at the ball and socket joint, it was obvious that this is how the figure was made. I handed him Thor while I put Iron Man’s leg back on and then the same thing happened. Are you kidding me? 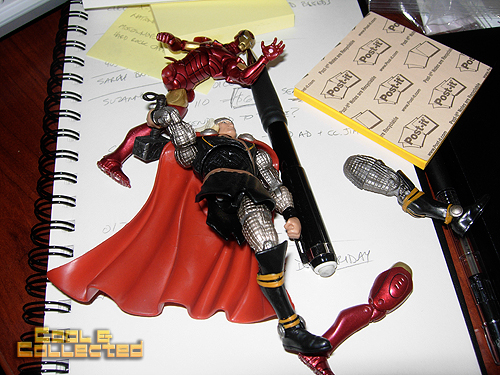 My son dropped the figures and went to play with something else. He hasn’t had any interest in them since.

I got to thinking about the action figures I played with as a kid, and how many of them are now sitting on a shelf with their legs intact. Sure, the G.I. Joe figures may have a busted O-ring or two, and those He-Man figures are a little looser than they should be, but at least we got to break our toys, and didn’t have them broken right out of the package.

I thought that maybe I bought a “collector’s set” or something not meant for kids, but nowhere on the package does it state: “Warning, this toy is not intended to be played with — just put it on a shelf and walk away.” After shelling out $18.00 for the pair, I’m actually going to return it to the store. I’ll chalk this one up as a lesson learned by a dad with kids just getting into action figures–“action” is a relative term, and five points of articulation is just fine.