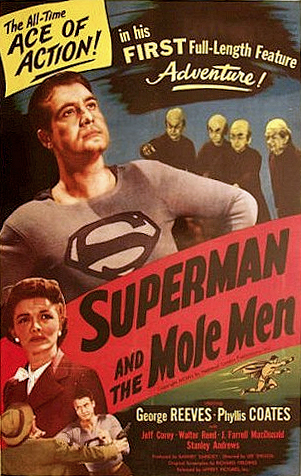 For all you Superman fanatics, I bet you don’t have one of these — an original one sheet movie poster from George Reeves’ first appearance as the Man of Steel. In 1951, just three years after the first Superman serials, the Man of Steel made his feature film debut.

“Superman and the Mole Men (Lippert, 1951). One Sheet (27″ X 41″). When an oil drilling expedition burrows into their underground home, the Mole Men emerge and begin exploring the strange world of the Earth’s surface. Their strange appearance causes nearby townspeople to panic and form a mob lead by local hothead Luke Benson (Jeff Corey). Superman and Lois Lane (George Reeves and Phyllis Coates) must act quickly to keep the peace between the locals and the subterranean aliens.”

You can buy this poster and many more at Conway’s Vintage  Treasures.

Check out a great clip of the movie: