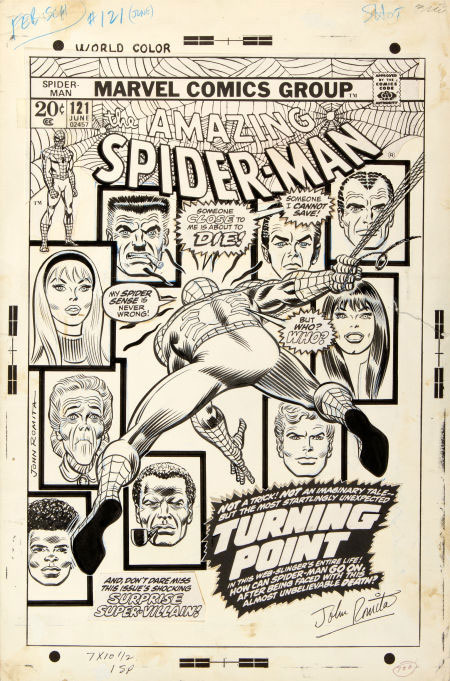 For many fans it signified the end of innocence in comics – Amazing Spider-Man #121, The Night Gwen Stacy Died – and now the original John Romita Sr. cover art from 1973 that warned readers all over the world of this critical event is set to debut at auction as part of Heritage Auctions’ Feb. 22 Vintage Comics & Comic Art Signature® Auction at the Fletcher-Sinclair Mansion (Ukrainian Institute of America), 2 East 79th Street (at 5th Ave). It is expected to bring $200,000+.

“Some say the death of Gwen Stacy marked the end of the Silver Age of comics,” said Barry Sandoval, Director of Operations for Comics and Comic Art at Heritage Auctions. “The Marvel office were deluged with letters, and there was much controversy at the time over whether Stan Lee had approved or even known about the plot twist.”

The caption at the lower right crystallizes the theme of what experts at Heritage are labeling as the most desirable piece of 1970s comic art the company has auctioned to date: “Not a trick!” it reads. “Not an imaginary tale — but the most startling unexpected turning point in this web-slinger’s entire life. How can Spider-Man go on after being faced with this almost unbelievable death?”

“This is a story that fans still talk about and still one of the most familiar and recognizable Spider-Man covers,” said Sandoval. “This is one of John Romita Sr.’s true masterpieces, a piece of art that has only grown in popularity as Spidey’s popularity has soared in the last decade. I can’t imagine the top collectors are going to hold back when it comes time to hammer this piece.”

The dynamic art spotlights the taut suspense in a superbly unbearable manner – who among the beloved Amazing Spider-Man cast would die? Any Spider-fan who bought this issue off the spinner-rack has this iconic scene seared into their comics consciousness, as with this scene, John Romita and Gerry Conway marked a tragic milestone for the world-famous saga launched by Steve Ditko and Stan Lee.

Heritage Auctions is the largest auction house founded in the United States and the world’s third largest, with annual sales of more than $800 million, and 750,000+ online bidder members. For more information about Heritage Auctions, and to join and receive access to a complete record of prices realized, with full-color, enlargeable photos of each lot, please visit HA.com