Skylanders first entered the scene in October 2011 with Skylanders: Spyro’s Adventure — a revolutionary new game that bundled action figures with a “Portal of Power,” which allows you to transport your physical toy into the virtual world of the game. Spyro’s Adventures was a mega-hit and went on to become the top selling console game of 2012. As of December 2012, over 30 million Skylanders toys were sold, earning Activision over $500 million.

It’s safe to say that my kids have contributed greatly towards that sum. 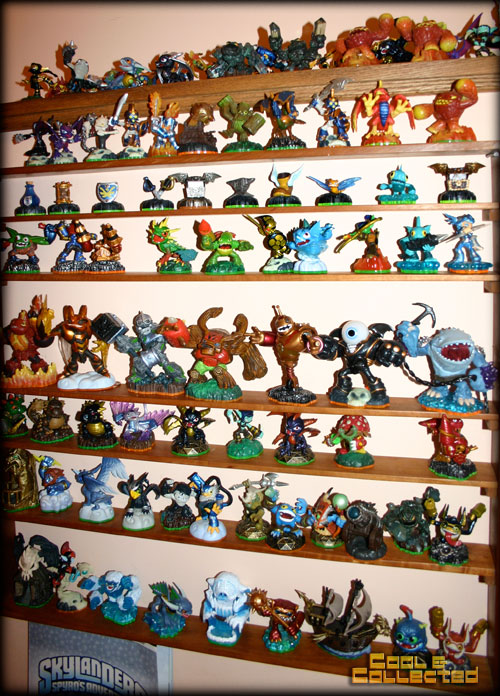 I have two boys who are the prime age for these figures, and they have worked together as a team to employ all of their aunts, grandmas, and cousins to assist in their hunt and capture of every figure that has been released. Of course, Mom and Dad have been bitten by the collecting bug as well.

In October 2012, Skylanders: Giants debuted and parents were sent clamoring for the larger figures along with new smaller figures and variants of some figures from the original game. Every trip to Target or Wal-Mart required a quick pass of the video game aisle to see if any new figures were released. And we were not alone–EVERY Skylanders display had a small gathering of parents with their kids, looking for the same thing. I can’t tell you how many conversations I have had with complete strangers about where to score the elusive figures. Rumors were flying, and shady deals were offered. Crack addicts aint got nothing on Skylanders parents. 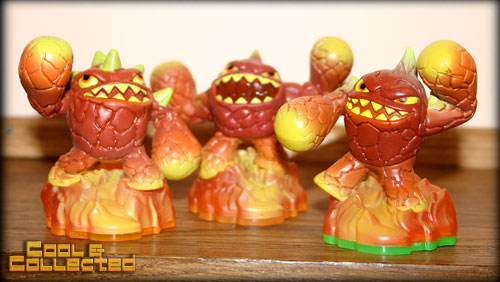 Of course, there can’t just be one figure. Nope, just about all the figures have multiple variations. There are the original figures from Spyro’s Adventure (green base) and many of them were rereleased with new poses for Giants (orange base). Then there are the Legendary figures, which are the same pose but a black and gold color scheme, then there are the ultra-rare variants with offbeat paint colors and gimmicks such as furry flocked textures. This is where I drew the line. I refuse to pay hundreds of dollars on eBay

for any of these variants–if it’s not the retail price, the kids aren’t going to get it. probably.

Oh, and did I mention that Skylanders: Swap Force was just announced, with 32 new figures coming to a store near you in October? oof. 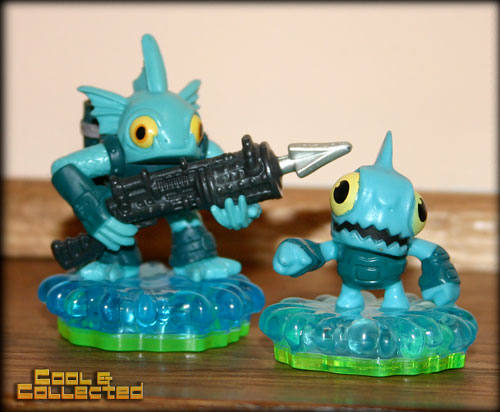 Just as we were getting into the Skylander craze, Frito Lay offered four small Sidekick figures. Aren’t they cute! This little fella is called Gil Runt, not to be confused with his big brother, standing next to him, Gil Grunt. The best thing about these figures is that they are actually playable in the game! You can place them alongside the Skylander figure on your Portal of Power and they appear in the game and help you take out Kaos’ minions! We only got one of these figures and a full set will run you around $50 on eBay

, but I could see those prices going up in the future. Exclusive mailaway figures–never sold in stores! It’s enough to make a collector swoon. 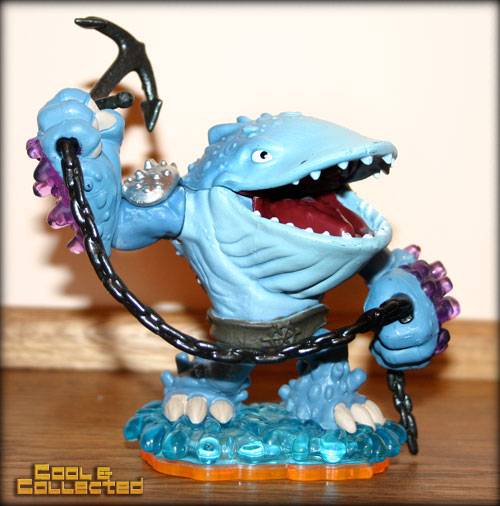 Despite the innovative gameplay experience, the reason that I believe the game is so successful is the strength of the characters. I mean, look at this guy! This is Thumpback, a muscle-bound humpback whale that swings around an anchor as his main weapon. He does a running jump and belly slide to attack enemies too. His catchphrase is “Hail to the Whale!” Yeah, each character has his own catchphrase too. There is such a wide variety of characters — male and female, animal and monster, friendly and scary — that there is surely a character for everyone’s taste. Ask 10 kids who their favorite character is and you’ll probably get 10 different answers.

The figures are extremely well made and feel like real toys, not some cheapo gimmick. They may not be articulated like other action figures, but that doesn’t stop my kids from running around the house with one in each hand, making up adventures. My youngest son takes a different figure to bed with him every night, making sure they each get a turn.

The figures are actually well-priced, which also helps with their collectibilty. They may not be cheap at $10 per figure ($15 for the Giants), but stores are always running “buy two get one free” promotions. Action figures typically cost over $10, so I really can’t complain about the price of these figures. But there are soooo many of them! (And they’re all so great!)

Each figure comes packaged with a trading card and a barcode sticker. One day, my kids will kiss my feet for grabbing those cards and stickers out of their syrup-encrusted fingers and putting them in a trading card binder. The barcodes can be used to activate the figures you own in three different games that are available for the iPad. So, your figures work in both console games AND three different iPad games–well played Activision, well played. One of my son’s friends carries around his stack of cards in his pocket everywhere he goes, and he’s probably not the only one–but once he loses that barcode, he loses the ability to add that character to some online games (unless he has a portal for that device). I would think a binder of these cards could be quite the valuable commodity for collectors in the future.

George Lucas may be the king of marketing with the Star Wars franchise, but Skylanders is about to give him a run for his money. Like any successful toy line, Skylanders has started to branch out in other venues… 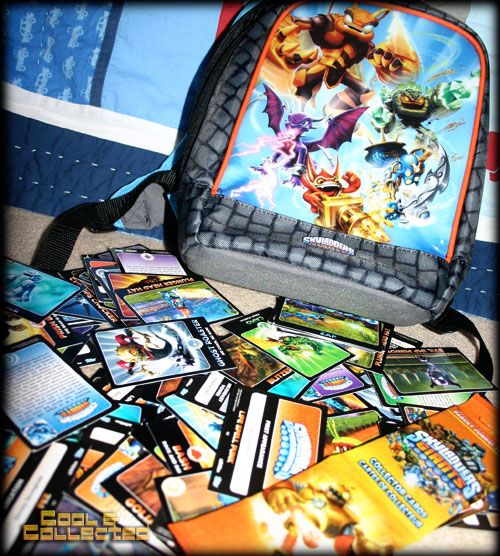 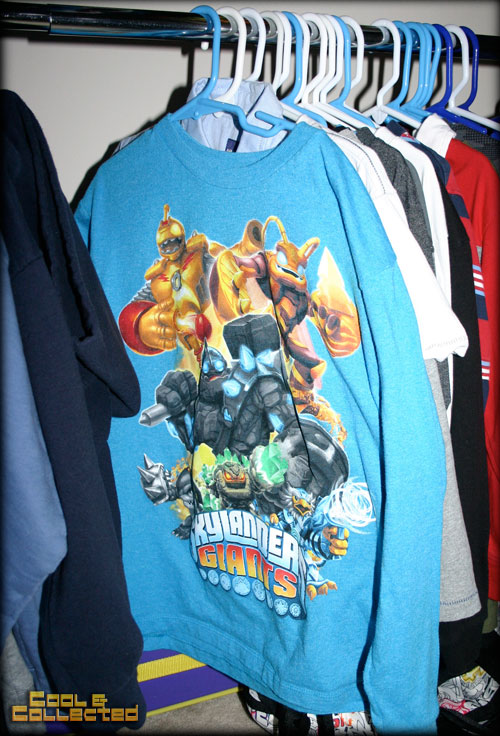 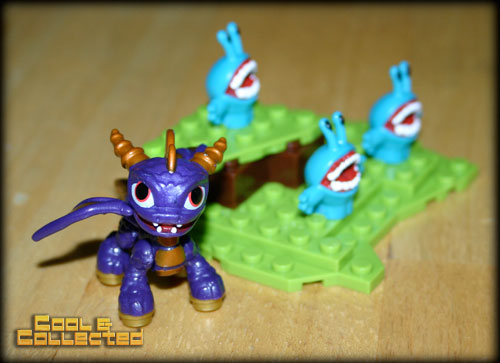 Yeah, my kids are “all in” when it comes to Skylanders. They read the books, and watch the commercials online over and over again. When’s the movie or animated series coming out? Get on that Activision!

As a collector who’s been around for a while, I can see that Skylanders has the makings to be the next big thing — yeah, I know, it already is a BIG thing — but I’m thinking 20-30 years from now. When my kids are all grown up, I can see them thinking back fondly of those countless hours they spent with that eclectic bunch of characters, and long to have those figures again to put them up on a shelf. I certainly plan to store these figures away once the magic wears off, and one day, give my kids a nostalgia bomb to rival no other.

Have your kids been bitten by the Skylanders bug? Have you?!? Do tell, and make me feel better about all the money that Skylandes have “Jet-Vac’ed” out of my wallet.