Collector statues have always fascinated me. They sit behind glass on store shelves, with price tags that are usually too steep for my collecting budget, but I have always wondered what it would be like to have a shelf full of them in my bat cave. The detailed sculptures are reminiscent of something you might see in a museum, or in a Hollywood prop studio.

One of the largest creators and distributors of these collector statues is Sideshow Collectibles. I wanted to get up close and personal with one of these statues to see what you get for your money and the good folks at Sideshow rose to the challenge.

The mail man recently dropped off a huge, heavy box with Sideshow Collectibles printed on the side. Let’s just say, it didn’t take long for me to tear it open. The statue I received is from Sideshow’s Star Wars product line, featuring every fanboy’s favorite, slave Leia, taking on Jabba the Hutt. The title of the diorama is “You’re going to regret this,” and it features the pivotal scene from Return of the Jedi, where Leia exacts revenge on the giant green lump. 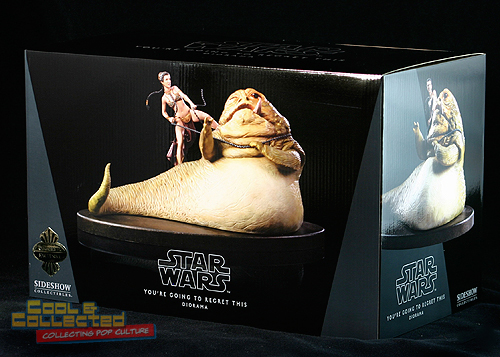 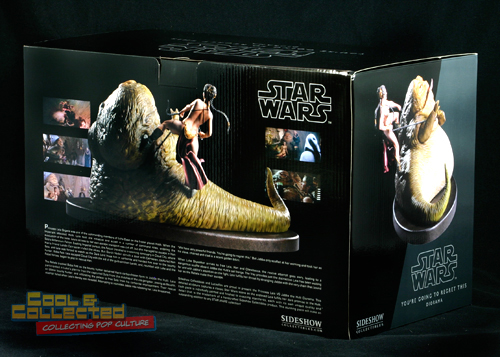 The outer box has photos of the statue from various angles, and the back of the box shows screen grabs from the movie along with some text describing the scene. The black box has an understated design that speaks to the quality of the statue it contains. 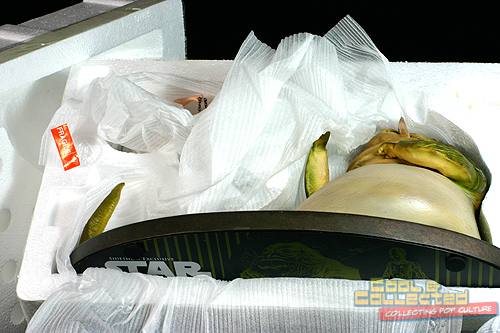 Did I say this thing is heavy? It weighs in at 8 lbs, the weight of a small bowling ball. Having never lifted one of these before, the weight was a nice surprise. I guess if I’m going to drop a few hundred bucks on something, I want it to be heavy and substantial.

The diorama is packed in styrofoam and also has protective foam rubber and padding sheets. Leia and Jabba were laying in that white styrofoam, just waiting to be set free. 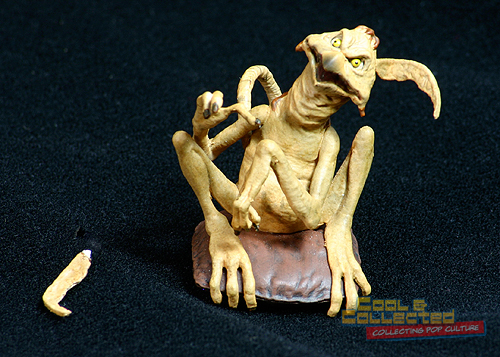 Despite all this protection, poor Salacious B. Crumb lost an ear. It’s nothing a little glue won’t fix, but it was enough to take away a smidgen of the giddiness that came with opening the box. The figure is so finely sculpted, that joint between the ear and head is only slightly larger than a pin head, so I’m not surprised how delicate it is. 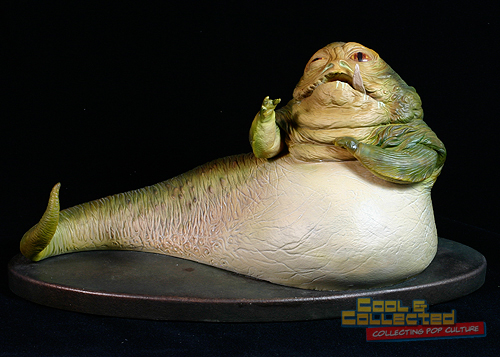 This is what Jabba looks like all by himself, licking his lips at the thought of the next tasty critter he will be fed. There are two slots on his back for Leia’s feet. The “assembly process” is fairly minimal, and you would be hard pressed to have any difficulty figuring it out, which is good because there aren’t any instructions included. Just look at the picture on the box and you can see what to do.

One really neat feature is the use of embedded magnets on the back of Jabba’s neck for the chain. You wrap the chain around his neck and the ends “magically” pull taut and hold in place. This is an elegant solution to something that could have been achieved with small hooks or pins that might break or require the chain to be looser. 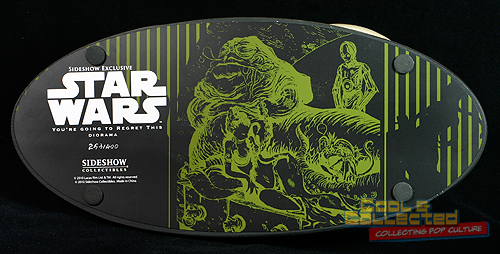 Another nice surprise for me was the bottom of the base. Sideshow statues typically have a limited production run, and this is where you find the production number for your statue. There is a pretty sweet illustration of Jabba’s lair along with the Star Wars and Sideshow logos. I certainly wasn’t expecting to see anything under the statue other than maybe a sticker or two. 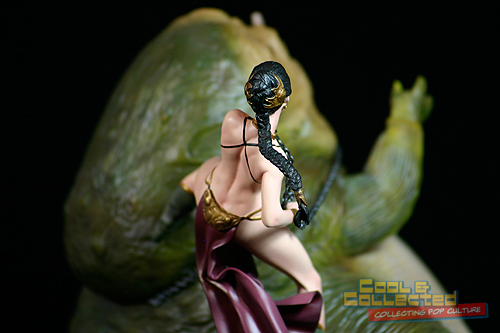 The detail on these statues is amazing. Modeling realistic people is incredibly difficult to pull off, but the artists at Sideshow are top notch. Look at the detail in Leia’s back and shoulders, and you’ll see what I mean. The diorama perfectly captures a moment in time, showing the struggle between the characters.

The paint on the statue is excellent. Jabba looks gross and slimy, just like you would expect. One of my favorite hobbies is to photograph items from my collections. These statues could keep me busy for a very long time, since I could photograph them from all sorts of angles, in all kinds of different lighting arrangements. It wouldn’t be too difficult to produce realistic-looking images as if you shot them at a Hollywood studio. 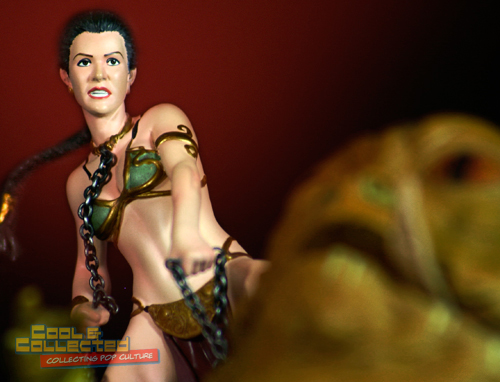 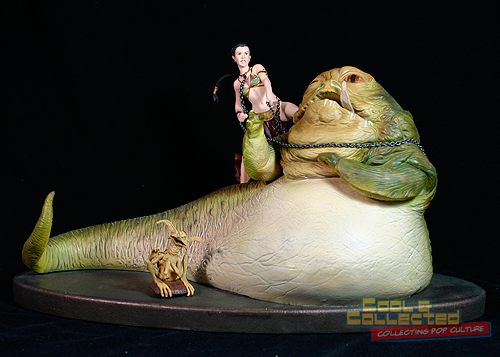 A statue from Sideshow Collectibles would be a highlight for any collector’s collection. There are statues for just about anything you collect in popular culture. Collector statues are not cheap, but they are totally worth the price since they are heirloom-quality items that you will enjoy owning for a good, long time.

I want to thank Sideshow Collectibles for sending me this diorama for review. I will be giving it away to one of my readers this month, so stay tuned to my Twitter feed if you want to add this to your Star Wars collection.