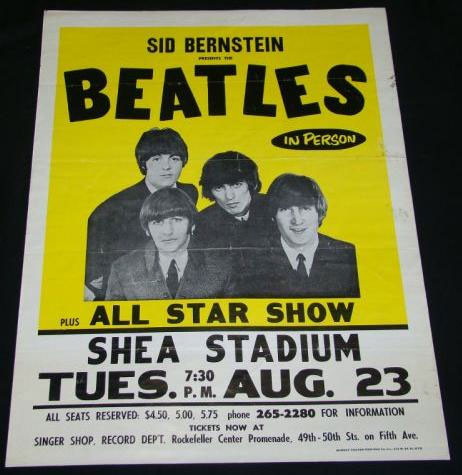 Gary Sohmers (of Antiques Roadshow fame) assembles an impressive collection of music memorabilia to be sold by www.WeissAuctions.com in Oceanside, NY on April 25th.

(OCEANSIDE, N.Y.) – Philip Weiss Auctions in conjunction with expert appraiser Gary Sohmers is offering yet another blockbuster rock ‘n’ roll memorabilia auction April 25, 2010 at his gallery and online including the 1966 Beatles concert poster and Elvis Presley signed original contract to purchase Graceland in Memphis, Tenn. in 1957 signed by Elvis and his parents.

Beatles fans will have much to peruse, including an extremely rare Beatles Aug. 23 Shea Stadium Concert Poster in a format previously unseen. It is the same size as the cardboard poster (of which only four are known to exist) and on the same paper stock as the one-sheet poster (of which only one is known to exist). The poster was printed by the Murray Poster Company for the iconic Aug. 23, 1966 concert, with the yellow and black ink on white paper being from the original printer’s plate, with no blur in any of the printing anywhere. The poster was authenticated by numerous concert poster experts at the recent Fest for Beatles Fans along with concert promoter Sid Bernstein.

Also to be sold will be the Beatles collection of Joy Waugh Donnell, who was featured on the TV program 48 Hours. Miss Donnell was recognized by Paul McCartney on the show as being “the number one Beatles fan in America,” and her collection bears that out. It includes a first state pressing of the famous Yesterday and Today “Butcher Cover” album, Remco Dolls, Car Mascot Nodders, Concert Tickets, Lunchboxes and items that were signed by all four Beatles.

Other Beatles items include a Beatles Banjo, 1964 Boston Garden Press Badge, a 1963 in person set of Autographs from a show in Gaumont UK, Records, Magazines and the original 1966 Master Reel-to-Reel Audio Tape of the Beatles Press conference on Aug. 22, 1996 just before the She Stadium concert.

The rare Elvis Presley signed Graceland contracts along with the contract to purchase the home Elvis initially purchased in Memphis at 1034 Audubon Road and Elvis’s purchase of the Circle G Ranch in Mississippi were the copies from the Real Estate Law Office that handled the sales.

Additional rock ‘n’ roll lots will include a “Chirping Crickets” LP signed by Holly and all the members of the group in person in 1959 at an appearance in Canada including a picture of Buddy with the consignor who had it autographed., as well as a large selection of psychedelic concert posters and handbills from the 1960s from the famed Fillmore East and Fillmore West venues, plus the Family Dog and other locations now finding a new audience of art collectors.

The rock and roll Pop Culture aspect of this auction is produced by Gary Sohmers Wex Rex of www.Allcollectors.com and Saxonville Auction Services of Framingham, MA.

The auction is searchable with bidding in person at the gallery by phone and online at www.WeissAuctions.com.