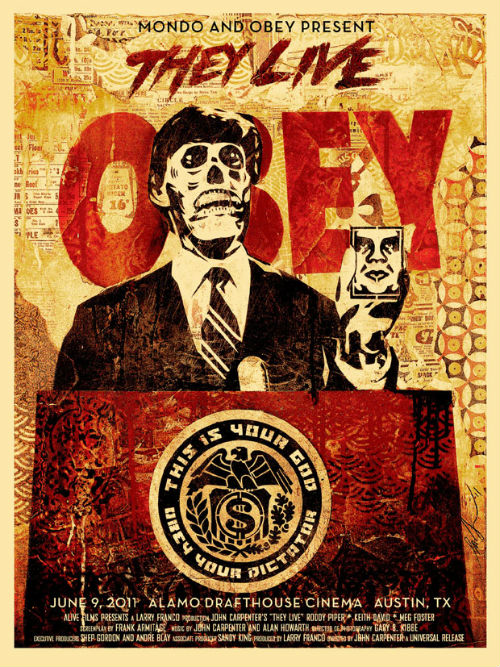 Mondo unveiled this They Live print by Shepard Fairey at an Alamo Drafthouse screening last night. Good luck trying to get a copy!

They Live is one of those films that came out at just the right time in my life. It has all of the elements that I loved then and that I love now. An alien controlled government who sends you subliminal messages through the media commanding you to do everything from MARRY AND REPRODUCE to SLEEP and OBEY, with one of my favorite wrestlers there to kick ass and chew bubblegum. As a 12 year old kid, what’s not to love about that? You just can’t go wrong with a movie that Duke Nukem himself quotes.

Any conversation about They Live inevitably leads to what I like to call The Six Minute Fight Scene of Great Truth. Yes, I just gave a fight scene it’s own title and if you’re reading this you probably have your own title for it too. The fight scene between Rowdy Roddy Piper and Keith David has been named one of “The 20 Greatest Fight Scenes Ever” by Rotten Tomatoes and has had an entire episode of South Park based off of it called “Cripple Fight”. According to the man himself, John Carpenter, Piper and David rehearsed this fight scene for about a month and a half and had become so good at it that they were actually making contact at some points. So yes, it deserves it’s own title.

So grab some friends, make some popcorn, put on your tinfoil hat and cool shades because your in for one helluva alien ass kickin’ good time.