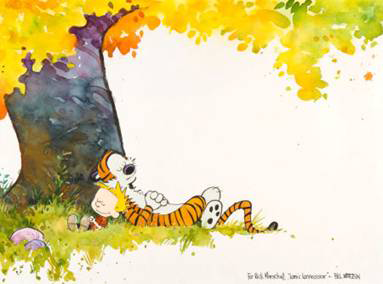 According to Todd Hignite, Vice President of Heritage Auctions: “Original Calvin and Hobbes artwork has, simply, never come up for public auction. There’s really no telling how high collectors will be willing to go on this one… It’s hard to state exactly how desirable this gorgeous piece of art is to collectors of all sorts, not just those interested in comic art. This one has it all, truly. It shows Calvin & Hobbes in a rare moment of total peace and repose – it is the philosophical heart and soul of that great comic – and now one lucky and determined collector is about to realize a dream held dear by many hardcore collectors and non-collectors alike.”

Watterson abruptly ended the Calvin and Hobbes comic strip in 1995, at the peak of its popularity, and since then has shunned the merchandising bonanza of a popular character. This painting is expected to fetch $50,000.00 but I certainly wouldn’t be surprised to see it go for much more than that. If anyone wants to buy me an early birthday present, this would make a pretty nice one!