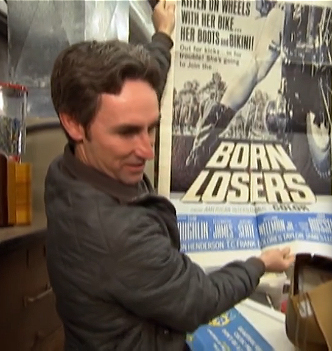 My message to American Pickers: more pop culture please. This was a particularly great episode because it featured items that did NOT have two wheels.

The first part of the show had Mike and Frank visit a guy in Georgia who used to run a drive-in theater, and had stashed thousands of posters and other items related to the business. Vintage movie posters are something near and dear to me, and while Mike was sifting through all those posters, I was soooo jealous. I have dreams like this, where I am surrounded by piles of cool stuff, all of it priced to sell.

I actually yelled at the TV when they bought only a few posters. They could have bought the lot and kept Danielle busy on eBay for a year selling them off. Sure, the majority were probably duds, but I bet they could have made a tidy profit in the long run.Instead, they called their movie expert in California and gave him the lead. Ahem, if you’re giving away leads to finds like this, I’d be happy to give you my number.

Check out this poster for Billy the Kid vs. Dracula: 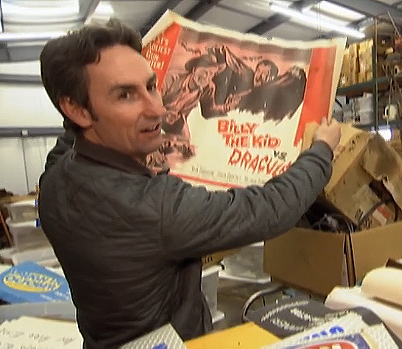 Who wouldn’t want that hanging above their fireplace? When Mike asked Frank who would win, Billy the Kid or Dracula, Frank didn’t miss a beat with this sound reasoning:

“Dracula, because he don’t die–[Billy would] have to shoot him with a wooden stake out of a gun. Impossible.”

The rest of the show had the guys picking through a garage and finding motorcycles and scooters, among other things. Enough already! Every episode is now a lesson in vintage bikes. I have no interest in bikes–they’re too big to collect! The massive 1956 porcelain sign from a Citizens gas station was pretty cool, but I don’t think my HOA would let me hang that on my garage.

I wish the History Channel hadn’t cut the show down to a half hour? It’s over way too soon!