This is the first of what will hopefully become a regular feature on Cool & Collected. I thought it might be fun to write about what I have seen recently in the pop culture universe and give some brief thoughts on it. This could be movies, TV shows, media events, toys — anything goes.  Warning: I am usually a good 6-months to 6-years behind when it comes to movies, so these opinions might be dated, but they’re new to me! Here goes…

I thought the concept of this movie was really good — big medical companies will repossess your artificial organs if you fall behind on your payments. The colonies of loan defaulters hiding out in abandoned shipyards and buildings was pretty strong, but the movie never really hooked me. Forest Whitaker is always good, and Jude Law wasn’t bad, but it seemed like they couldn’t decide if they wanted to make an intelligent, artsy movie or an action flick, and got lost somewhere in between. This was a forgettable movie for me, but the last minute of the film made it just a little bit better.

After all the recent talk about the new Conan movie, I was feeling nostalgic for some Hyborian Age goodness. It’s been a long time since I watched this movie and I must have blocked out all memory of Ernie Reyes, Jr. This movie might have been okay if he wasn’t there being so annoying. A lot of people have a soft spot for that kid, but I am not one of them.

Scott Pilgrim vs. The World

Yes, I’m late to the party on this one. To be honest, I really didn’t think this movie was going to be any good. The desperate geek fanaticism for this movie tried so hard to make people like it, that i thought it just had to suck. Well, I gotta admit that I loved it. The movie had a very rare quality — it was fun.

I don’t remember the last FUN movie I’ve seen. I found myself smiling while Michael Cera awkwardly embraced the lead role and I can’t think of another actor who would have been able to pull this movie off so well.

I’ve never read the Scott Pilgrim comics, so I came into this movie cold, and found myself thoroughly immersed in the goofy video game-inspired world. The fast pace and editing was superb. I can see this movie being revered 20 years from now as one of those movie that just defines a time period. It will have a cult following and midnight showings at the local art house theater. 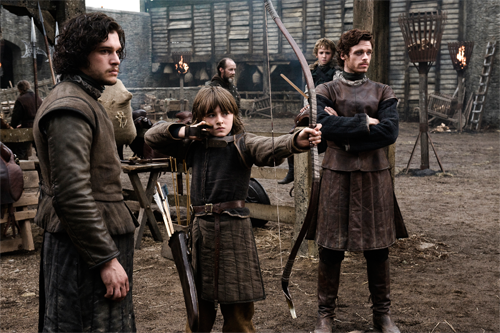 I am really enjoying this series, but to be honest, I just devoted weeks to reading the entire George R.R. Martin series. If I didn’t have such a vested interest in the series, I would be happier watching this on DVD rather than waiting for each episode each week. There’s just something about the series that has taken a long time to click, but after this week’s episode, “The Wolf and the Lion,” that’s all about to change.

There really hasn’t been much action in this series so far, as the vast story lines are being established. The whole setting is almost too realistic for me, with all the cold, stone chambers, and echoing footsteps. The harsh lighting does nothing for the ladies in this show. I can’t tell if Cersei is attractive or a big unibrow with bad teeth. Maybe that’s intentional? If so, then it’s brilliant!

The series has not strayed from the books an inch until this week’s episode, when it showed us the relationship between Loras and Renly. I don’t remember that from the books, and to be honest, I could have done without it. If HBO wants to show two dudes shaving each other (among other things), I might need to find something else to watch on Sunday night.

Oh, and the scene with Lysa Arrin breastfeeding her 8-year old son was more cringe-inducing than the worst horror movie. I thought the Eyrie set was really well-done, and I look forward to the scenes to come.

The end of this episode had Ned Stark confronting Jaime Lannister in a well-choreographed fight scene, and this is where things are going to start to pick up some steam. I find myself wanting to cheer for certain characters, hoping that their fates will be different than the ones I read. This is going to be a tough show to watch.

With the new HBOGO site, I was able to catch up on this series, and watched season 7. This show has always been a  guilty pleasure of mine, but it’s getting pretty stale. The addition of Vince’s girlfriend, Sasha, is quite possibly the shark jumping moment for me — that girl can’t act. These latest episodes just seemed to get too serious. Jeremy Piven’s Ari Gold is still the best character on the show, but even he seemed blah in this season.

I don’t listen to many podcasts, but the Decade Brigade is one that I download faithfully. The two hosts, Franklin McMahon and Sarah Wallace, are great at making you feel like an old friend as they remind you of past events, TV shows and toys from our youth. They’re about the same age as me (pushing old) so their memories match up with mine. The latest episode had them chatting about the Royal Wedding (Charle’s and Diana’s), Light Brite, sticker collections, and breakfast cereals. If you like having conversations that often include “rember when…” then you should check out this podcast.

Another podcast I regularly download is Retroist. Each episode talks about one movie, TV show, or other pop culture icon for a half hour, and they go into every bit of minutiae that you could imagine. I listened to the Airplane! episode and it made me want to pop in the DVD and watch it again, to see the items I missed, even after seeing the movie dozens of times.

I’m halfway through the first book in this Trilogy by Suzanne Collins and am enjoying it well enough so far. It’s pretty breezy reading, and is basically The Running Man for kids. So far so good.

I always enjoy talking about pop culture (the older the better), so post a comment below and let me know what you thought about these movies, shows, and books.